Michael Anthony McFarlane OBE (born 2 May 1960) is a retired British athlete who competed mainly in the 100 metres and 200 metres. He won an Olympic silver medal in the 4×100 metres relay at the 1988 Seoul Olympics. He was the 200 m gold medallist at the 1982 Commonwealth Games and a 60 metres gold medallist at the 1985 European Athletics Indoor Championships. McFarlane won two further sprint medals at the 1986 Commonwealth Games.

He lived in the London Borough of Hackney. He started out as a schoolboy winning the English schoolboys' 200 metres on three occasions. This success continued as he went on to win the AAA's junior Indoor 60/200 metre titles. This was followed by an outdoor AAA's junior 200 victory. He was also a South of England Champion and in 1979/1980 he won the European junior and AAA's Indoor 200 metre titles.

In 1980 he went to the Moscow Olympics where he ran in the 200 metres, where he got to the quarter final. He was also a member of the sprint relay team that reached the final and finished 4th in a new British record. In 1982 after winning the U.K. championships 200, he went to his second Commonwealth Games where he won a joint Commonwealth gold alongside 1980 Olympic 100 metre champion Allan Wells in an historic and memorable 200 metres where both men could not be separated, and both claimed gold medals. [1]

In 1984 he won the U.K. championships 100 metres, then went to the Los Angeles Olympics where he reached the final of the 100 metres, and finished an excellent 5th. In 1985 he became European Indoor Champion at 60 metres. In 1986 he competed at his third Commonwealth games where he won bronze in the 100 metres, and silver in the sprint relay. [2] [3] He also reached the European 100 metre final in Stuttgart in 1986 where he finished 6th. He ran in the 100 m at the 1987 World Championships in Athletics, failing to make the final.

He competed for Great Britain in the 1988 Summer Olympics held in Seoul, South Korea in the 4 x 100 metre relay where he won the silver medal with his teammates Elliot Bunney, John Regis and Linford Christie. He subsequently made a successful career in coaching after retirement and is a high performance coach for UK Athletics based at the National Athletics Centre in Lee Valley.

Kim Collins is a former track and field sprinter from Saint Kitts and Nevis. In 2003, he became the World Champion in the 100 metres. He represented his country at the Summer Olympics on five occasions, from 1996 to 2016, and was the country's first athlete to reach an Olympic final. He competed at ten editions of the World Championships in Athletics, from 1995 to 2015, winning five medals. He was twice runner-up in the 60 metres at the IAAF World Indoor Championships. At regional level, he was a gold medallist at the Commonwealth Games and a silver medallist at the Pan American Games. 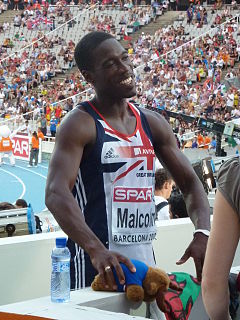