Last updated June 11, 2020
In this Japanese name, the family name is Mikimoto.

Mikimoto Kōkichi (御木本 幸吉, 25 January 1858 – 21 September 1954) was a Japanese entrepreneur who is credited with creating the first cultured pearl and subsequently starting the cultured pearl industry with the establishment of his luxury pearl company Mikimoto. [1] [2]

Kokichi's company was awarded patents for pearl cultivation and in 1985 to commemorate the 100th anniversary of the patent system he was selected as one of Japan's top 10 inventors. [3] [4] He was inducted into the house of peers by imperial decree and posthumously awarded the Grand Cordon of the Order of the Sacred Treasure. [2] [4]

The company was ranked as one of the world's most luxurious brands by Women's Wear Daily Magazine and Mikimoto was considered one of the best Japanese financial leaders of the 20th century by Nihon Keizai Shimbun. [4] He is also known as the founder of Mikimoto Pharmaceuticals, a company specialising in beauty products containing pearl calcium. Mikimoto Pearl Island is named after him. In addition, the "Phoenix Mikimoto Crown" used by Miss Universe winners as well as the pageant crown used by Miss International is credited to his patented work.

On 25 January 1858, Mikimoto was born in Toba, Shima Province (now Mie Prefecture). Mikimoto's father was an udon shop owner. Mikimoto was the eldest son. At age 11, Mikimoto's father fell ill. He left school at the age of 13 and sold vegetables to support his family. Seeing the pearl divers of Ise unloading their treasures at the shore in his childhood started his fascination with pearls. [5] At the age of 20, Mikimoto noticed the many flaws of pearls as he judged a pearl exhibition in 1878. This began Mikimoto's search for the development of the perfect pearl. [6]

Mikimoto began his search of an alternative method to produce pearls as the chairman of the Shima Marine Products Improvement Association. At this point the demand for pearls had severely outweighed the supply, prompting the consideration of an effort to protect the oysters. [7]

In 1888, Mikimoto obtained a loan to start his first pearl oyster farm at the Shinmei inlet on Ago Bay in Mie prefecture with his wife and partner Ume. On 11 July 1893, after many failures and near bankruptcy, he was able to create the hemispherical cultured pearls. The pearls were made by seeding the oyster with a small amount of mother of pearl. [7] Despite this major discovery there were initially difficulties in selling his cultured pearls due to public confusion. To encourage sales, Mikimoto opened a jewelry boutique in Ginza where he was able to have workers educate the consumer on the nature of the cultured pearls. [6] [7] He introduced these mabes at a marine products exposition in Norway in 1897 and began an export business. However, it took him another 12 years to create completely spherical pearls that were indistinguishable from the highest quality natural ones, and commercially viable harvests were not obtained until the 1920s. In 1927, Mikimoto met with inventor, Thomas Edison, who was in awe of Mikimoto's cultured pearls as it was "supposed to be biologically impossible". [8]

Mikimoto did not know that government biologist Tokichi Nishikawa and a carpenter, Tatsuhei Mise, had each spent time in Australia and learned the secret to spherical pearl production from expatriate British marine biologist William Saville-Kent [9] — inserting a piece of oyster epithelial membrane (the lip of mantle tissue) with a nucleus of shell or metal into an oyster's body or mantle causes the tissue to form a pearl sack. The sack produces nacre, which coats the nucleus, thus creating a pearl. Mise received a 1907 patent for this grafting needle. When Nishikawa applied in the same year, he realized that Mise had already secured a patent. In a compromise, the pair agreed to cooperate, calling their discovery the "Mise-Nishikawa method".

Mikimoto had received a patent in 1896 for producing hemispherical pearls, or mabes, and a 1908 patent for culturing in mantle tissue, but he could not use the Mise-Nishikawa method without invalidating his own patents. Mikimoto then altered his patent application to cover a technique to make round pearls in mantle tissue, which was granted in 1916. However, this method was not commercially viable. Mikimoto finally made arrangements to use Nishikawa's methods after 1916, and Mikimoto's business began to expand rapidly.

In 1899, the first Mikimoto pearl shop opened in the fashionable Ginza district of Tokyo selling natural seed pearls and half round pearls. The Mikimoto business expanded internationally, opening stores in London (1913).

By 1935, the Japanese pearl industry was facing oversupply issues and plummeting prices for Japanese cultured pearls. Mikimoto promoted Japanese pearls in Europe and the US to counteract falling prices. He publicly burnt tons of low-quality pearls as a publicity stunt to establish a reputation that the Mikimoto company only sold high-quality cultured pearls.

Mikimoto had to constantly fight allegations that his pearls were only "imitations" of real pearls, [8] despite scientific reports to the contrary. Mikimoto took advantage of every opportunity to personally promote his pearls, and took part in the 1926 Philadelphia World Exposition in which he displayed a replica of the "Liberty Bell" covered with pearls.

In June 2013, the company was chosen to design and procure five jewels consisting of a brooch, necklace, earrings, bracelet and the state diadem of Princess Kako of Akishino for her 20th birthday anniversary, valued at ¥30 Million JPY (US$279,000). The illustrious tiara features both floral motif and national symbols of Japan.

Mikimoto's wife was Ume, who was also his partner in creating the cultured pearl. [11] Mikimoto and his wife have five children. [12] Mikimoto's children are Rui (eldest daughter), Mine (second daughter), Yo (third daughter), Ai (youngest daughter), and Ryuzo (son). On 21 September 1954, Mikimoto died. He was 96. Mikimoto's personal memorabilia is displayed at Mikimoto Pearl Island Memorial Hall, a museum in Toba, Japan. [12] [13] 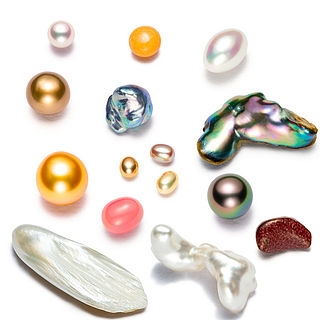 Toba is a city located in Mie Prefecture, Japan. 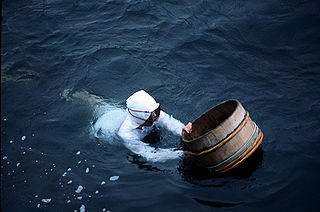 Ama are Japanese divers, famous for collecting pearls. They are also known as uminchu or kaito. The vast majority of ama are women. 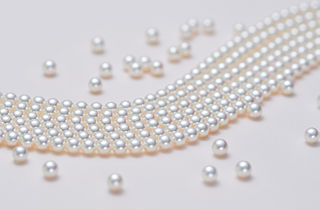 A cultured pearl is a pearl created by a mussel farmer or oyster farmer under controlled conditions. Cultured pearls can be farmed using two very different groups of bivalve mollusk: the freshwater river mussels, and the saltwater pearl oysters.

Pearl hunting, also known as pearling, is the activity of recovering pearls from wild molluscs, usually oysters or mussels, in the sea or fresh water. Pearl hunting used to be prevalent in the Persian Gulf region and Japan. Pearl diving began in the 1850s on the northern and north-western coast of Australia, and started in the Torres Strait, off Far North Queensland in the 1870s. 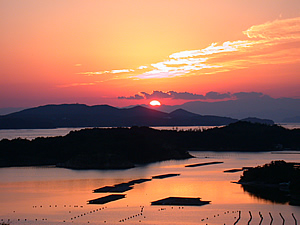 Shima is a city in Mie Prefecture, Japan. 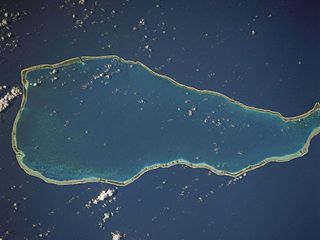 Rangiroa or Te Kokōta is the largest atoll in the Tuamotus and one of the largest in the world.

Ohama Kagetaka was a Japanese pirate during the latter part of the Sengoku period and the Azuchi-Momoyama period of Japan. He operated in the Shima Province area, and later commanded naval forces for both Takeda Shingen and Tokugawa Ieyasu before his death in 1597 at the age of 57. 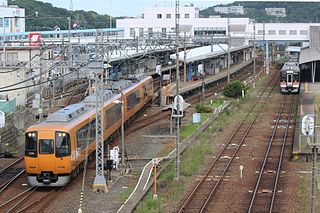 The Ise-Shima (伊勢志摩) region, also called the Shima Peninsula, refers to the areas of eastern Mie Prefecture (Japan) in or around Ise-Shima National Park, which include the cities Ise, Toba, Shima, and parts of the town of Minami-Ise. The area thrives on tourism, with many resort hotels and beaches in the area. Ise-Shima is also famed for fresh seafood, particular oysters.

Ago Bay is a bay in the city of Shima, Mie Prefecture, Japan. It is part of the Ise-Shima region. 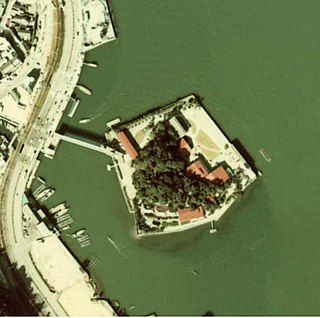 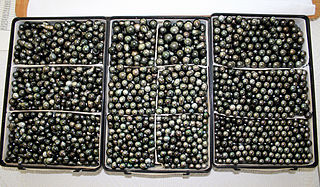 The Tahitian pearl is an organic gem formed from the black lip oyster. These pearls derive their name from the fact that they are primarily cultivated around the islands of French Polynesia, around Tahiti.

The system of industrial rights in Japan celebrated 100 years of its existence in 1985. In celebration of the one-hundredth anniversary of the Japanese system of industrial property rights, the Japan Patent Office selected ten great inventors whose contributions were particularly memorable and of historical significance in the industrial development of Japan.

Pteria penguin, commonly known as the penguin's wing oyster, is a species of marine bivalve mollusc in the family Pteriidae, the pearl oysters. It is native to the western and central Indo-Pacific region and is used for the production of cultured pearls. The generic name comes from Greek πτερον (pteron) meaning wing.

Valerie Hernández Matías is a Puerto Rican model and beauty queen who was crowned Miss International 2014 in Tokyo, Japan. She is the second winner from Puerto Rico after Laurie Simpson in 1987.