Mikulás (or Szent Miklós) is the Hungarian version of Saint Nicholas, and a similar figure to Santa Claus. In many cities, Mikulás is getting more conflated with Santa Claus. [1] Still, it is believed that Mikulás arrives to celebrate his day, December 6 (while some countries celebrate it December 5), and leaves before Christmas. This tradition is also well known in Romania (Moș Nicolae), Slovenia (Miklavž), the Czech Republic, Slovakia (both Mikuláš), Croatia (Sv. Nikola) and Poland (Mikołaj).

Although the role of gift-giver on Christmas Day itself is assigned to the Christ Child, on the eve of Saint Nicholas' feast day of 6 December Hungarian children traditionally place a boot on their windowsill [2] waiting for Mikulás to come by and fill it with treats.

There is no Mrs. Mikulás in Hungary. [3] In the Czech Republic, Slovenia and Slovakia, Mikulás/Miklavž often comes with two assistants: a good Angel who gives out presents to good children and a “Krampusz”, a mean elf, in some version a Devil, who punishes bad children.

On 6 December, they come to the houses where small children live and give them some presents. While "good" children receive various fruits, candies and toys, "bad" children can expect nothing more than a wooden spoon, several pieces of coal or carrot or potatoes left by Krampusz. (However, as no one is either all good or all bad, most children get both sweets and a switch.)

To earn some extra money, students often act as Mikuláš, the Angel, and the Devil. Treats are traditionally sweets, chocolate, candy and different nuts. In modern times, chocolate Santa figures are most common. To get the presents, the boots must be polished, because Mikulás does not fill boots that are not shiny enough.

Bad kids may also get onions, raw potatoes or a lump of coal in their boots next to their presents as a warning that next year they might get only these.

Although presents are usually given to children by parents, it is not uncommon between adults to place small surprises (such as presents or a virgács) into the boots of others.

The virgács is a switch resembling a small broom, made with twigs or branches from a bush or willow tree, often painted gold. They are sold on the streets in Hungary before Mikulás. [4] 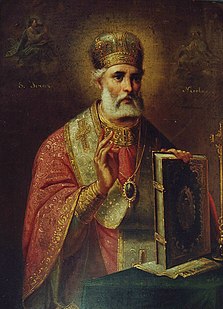 Nicholas, Nickolas, Nikolas, Nikolaus or Nicolas is a male given name, derived from the Greek name Νικόλαος (Nikolaos), a compound of νίκη nikē 'victory' and λαός; laos 'people'. The name became popular through Saint Nicholas, Bishop of Myra in Lycia, the inspiration for Santa Claus. The Greek word laos originates from the word root -las, as found in the word λα-τομεῑο la-tomeio meaning "stone" or "rock" and the name can be understood to mean victory of the people. The name Nikolaos (Νικόλαος) pre-existed the Bishop of Myra who became Saint Nicholas, by several centuries. The Athenian historian Thucydides mentions that in the second year of the Peloponnesian war between Sparta and Athens, the Spartans sent a delegation to the Persian king to ask for his help to fight the Athenians; Nikolaos was one of the delegates. The customary English version of spelling "Nicholas", using an "h", first came into use in the 12th century and has been firmly established since the Reformation, though "Nicolas" is occasionally used. 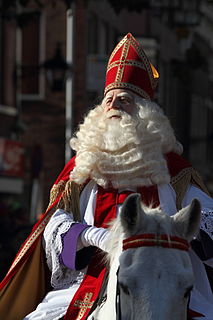 Sinterklaas or Sint-Nicolaas is a legendary figure based on Saint Nicholas, patron saint of children. Other names for the figure include De Sint, De Goede Sint, and De Goedheiligman in Dutch; Saint Nicolas in French; Sinteklaas in West Frisian; Sinterklaos in Limburgs; Saint-Nikloi in West Flemish; Kleeschen and Zinniklos in Luxembourgish; and Sankt Nikolaus or Nikolaus in German. 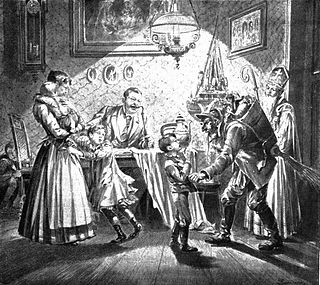 The companions of Saint Nicholas are a group of closely related figures who accompany Saint Nicholas throughout the territories formerly in the Holy Roman Empire or the countries that it influenced culturally. These characters act as a foil to the benevolent Christmas gift-bringer, threatening to thrash or abduct disobedient children. Jacob Grimm associated this character with the pre-Christian house spirit which could be benevolent or malicious, but whose mischievous side was emphasized after Christianization. The association of the Christmas gift-bringer with elves has parallels in English and Scandinavian folklore, and is ultimately and remotely connected to the Christmas elf in modern American folklore. 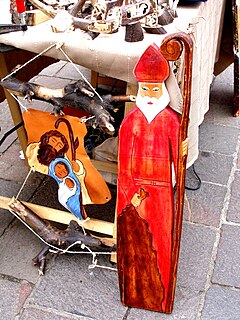 Saint Nicholas Day, or the Feast of Saint Nicholas, observed on December 5/6 in Western Christian countries and December 19 in Eastern Christian countries on the Old Calendar, is the feast day of Saint Nicholas. It is celebrated as a Christian festival with particular regard to his reputation as a bringer of gifts, as well as through the attendance of Mass or other worship services. In Europe, especially in "Germany and Poland, boys would dress as bishops begging alms for the poor." In Ukraine, children wait for St. Nicholas to come and to put a present under their pillows provided that the children were good during the year. Children who behaved badly may expect to find a twig or a piece of coal under their pillows. In the Netherlands, Dutch children put out a clog filled with hay and a carrot for Saint Nicholas' horse. On Saint Nicholas Day, gifts are tagged with personal humorous rhymes written by the sender. In the United States, one custom associated with Saint Nicholas Day is children leaving their shoes in the foyer on Saint Nicholas Eve in hope that Saint Nicholas will place some coins on the soles. 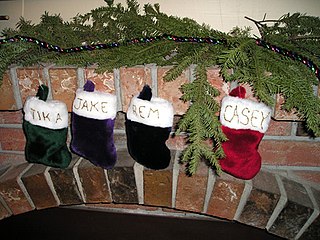 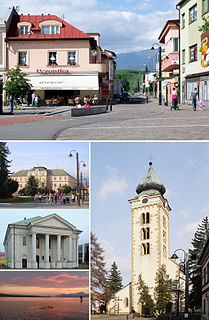 Liptovský Mikuláš is a town in northern Slovakia, on the Váh River, about 285 kilometers (177 mi) from Bratislava. It lies in the Liptov region, in Liptov Basin near the Low Tatra and Tatra mountains. The town, known as Liptovský Svätý Mikuláš before communist times, is also renowned as a town of guilds and culture. 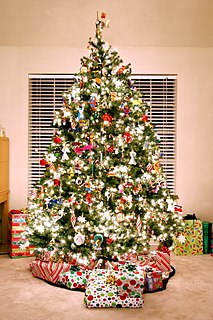 Christmas traditions vary from country to country. Christmas celebrations for many nations include the installing and lighting of Christmas trees, the hanging of Advent wreaths, Christmas stockings, candy canes, setting out cookies and milk, and the creation of Nativity scenes depicting the birth of Jesus Christ. Christmas carols may be sung and stories told about such figures as the Baby Jesus, St Nicholas, Santa Claus, Father Christmas, Christkind or Grandfather Frost. The sending and exchange of Christmas card greetings, observance of fasting and special religious observances such as a midnight Mass or Vespers on Christmas Eve, the burning of a Yule log, and the giving and receiving of presents. Along with Easter, Christmas is one of the most important periods on the Christian calendar, and is often closely connected to other holidays at this time of year, such as Advent, the Feast of the Immaculate Conception, St Nicholas Day, St. Stephen's Day, New Year's, and the Feast of the Epiphany. 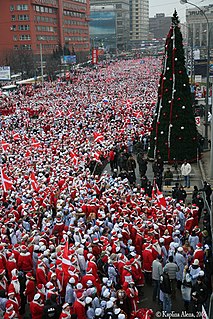 Ded Moroz is a fictional character similar to Father Christmas and Santa Claus who has his roots in Slavic paganism mythology. The tradition of Ded Moroz is mostly spread in East Slavic countries and is an important part of Russian culture. Although at the beginning of the Soviet era communists banned Ded Moroz he soon became an important part of the Soviet culture. The literal translation is "Grandfather Frost". 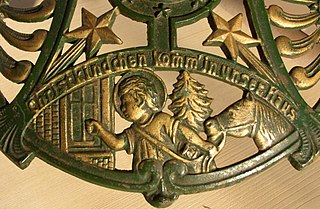 The Christkind is the traditional Christmas gift-bringer in Austria, Switzerland, southern and western Germany, the Czech Republic, Croatia, Liechtenstein, Luxembourg, Belgium, Portugal, Slovakia, Hungary, parts of northeastern France, Upper Silesia in Poland, parts of Hispanic America, in certain areas of southern Brazil, Quebec in Canada, and in the Acadiana region of Louisiana. In some parts of Italy, the analogous figure of the Christkind is known as Gesù Bambino, however Santa Claus is the traditional bearer of Christmas gifts. Christkind is called in Portuguese Menino Jesus, in Hungarian Jézuska, in Slovak Ježiško, in Czech Ježíšek, in Latin America Niño Dios or Niño Jesús and in Croatian Isusić or Isusek.

This article is about the culture of the Czech Republic.

Mikuláš or Mikulas may refer to:

Ježíšek is a cultural Christmas figure popular in the Czech Republic. It is also known as Ježiško in Slovakia, Jezušček in Slovenia and as Jézuska in Hungary.

Weihnachten is the observance of what is commonly known in English as Christmas Eve in the German-speaking countries like Germany, Austria and Switzerland. It is also widespread in countries with a German-speaking minority, such as Transylvania in Romania, South Tyrol in Italy, Eupen in Belgium, and various diasporas such as the German Brazilian and German American communities. Traditions of Weihnachten influenced Christmas and Advent culture throughout the world.

Chocolate-covered potato chips are an American snack food or confectionery, consisting of potato chips that have been dipped into melted chocolate or cocoa, and coated with the chocolate. They are used for snacking like potato chips, and also served at parties or get togethers as appetizers and dessert items, especially in North Dakota.

Christmas in Hungary is celebrated with traditions similar to those found in other Central European countries as well as customs unique to the region. 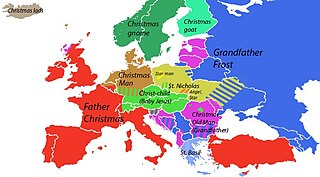 A number of Midwinter or Christmas traditions in European folklore involve gift-bringers. Mostly involving the figure of a bearded old man, the traditions have mutually influenced one another, and have adopted aspects from Christian hagiography, even before the modern period. In Slavic countries, the figure is mostly Father Frost. In Scandinavia, it is an elf-like figure or tomten who comes at Yule . In Western Europe, the figure was also similar to an elf, developing into Father Christmas in the modern period in Great Britain. In German-speaking Europe and Latin Europe, it became associated with the Christian Saint Nicholas.

In Central European folklore, Krampus is a horned, anthropomorphic figure described as "half-goat, half-demon", who, during the Christmas season, punishes children who have misbehaved. This contrasts with Saint Nicholas, who rewards the well-behaved with gifts. Krampus is one of the companions of Saint Nicholas in several regions including Austria, Bavaria, Croatia, Czech Republic, Hungary, Northern Italy including South Tyrol and the Province of Trento, Slovakia, and Slovenia. The origin of the figure is unclear; some folklorists and anthropologists have postulated it as having pre-Christian origins. 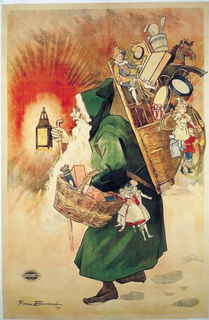 Christmas in France is a major annual celebration, as in most countries of the Christian world. Christmas is celebrated as a public holiday in France on December 25, concurring alongside the United States and other countries.