The Milner Pass Mess Hall was placed on the National Register of Historic Places on July 20, 1987. [1] 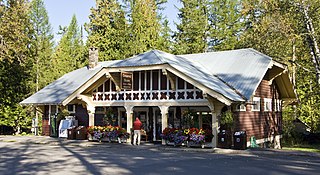 The Lake McDonald Lodge Historic District is a historic district in Glacier National Park in the U.S. state of Montana. It comprises the Lake McDonald Lodge and surrounding structures on the shores of Lake McDonald. It is centered on the main lodge, which was designated a National Historic Landmark in 1987, as well as surrounding guest cabins, dormitory buildings, employee residences, utility buildings, and retail structures. The district includes several privately owned inholding structures that are contributing structures, as well as a number of non-contributing buildings.

The General George Crook House Museum is located at 5730 North 30th Street in Fort Omaha. The Fort is located in the Miller Park neighborhood of North Omaha, Nebraska, United States. The house was listed on the National Register of Historic Places in 1969, and is a contributing property to the Fort Omaha Historic District. 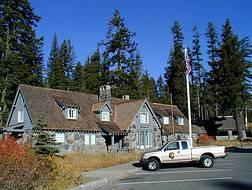 Oregon Caves Historic District covers 6 acres (24,000 m2) in the main visitor area of Oregon Caves National Monument in southern Oregon. The district includes four primary buildings plus two other structures. Because of the unique rustic architecture of these National Park Service buildings and the surrounding park landscape, the area was listed on the National Register of Historic Places in 1992.

The St. Mary Utility Area Historic District comprises a support area of Glacier National Park with employee housing and support buildings in the prevailing National Park Service Rustic style. The complex was built by Civilian Conservation Corps labor to replace the administrative facilities at East Glacier Ranger Station in a location more convenient to the new Going-to-the-Sun Road. The majority of development occurred between 1933 and 1941. Buildings include maintenance buildings, an oil house, a dormitory and barns. The area is surrounded by residences, not included in the district, built during the Mission 66 program and later. 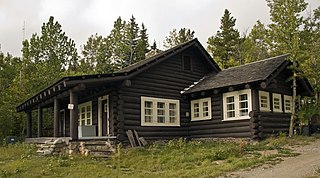 The Sherburne Ranger Station in Glacier National Park is an example of the National Park Service Rustic style. Located in the Swiftcurrent portion of the park, it was built in 1926. It is part of a small historic district that includes a mess hall and subsidiary structures, formerly known as the Sherburne Road Camp, established in 1931. The ranger station closely resembles the ranger stations at Belly River and Lake McDonald. A checking station at the road remains substantially intact. 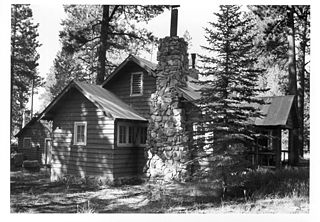 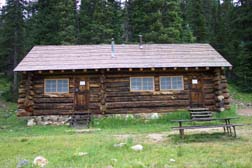 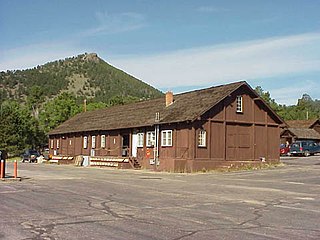 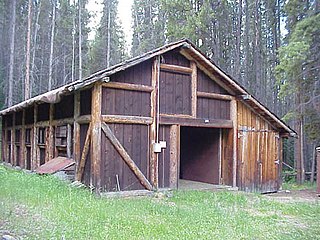 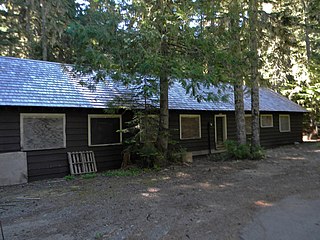 The White River Mess Hall and Dormitory is the only remaining Civilian Conservation Corps camp structure remaining in Mount Rainier National Park. The wood-framed building was built in 1933, and comprising 2,185 square feet (203.0 m2), originally containing a kitchen dining room, living room, two bathrooms, a bedroom and a bunkroom, as well as a service porch. The building no longer serves as a residence and is used for storage. It is located at the White River entrance to the park, part of a complex of service buildings.

The Fort Leaton State Historic Site is located on Farm to Market Road 170, in Presidio County in the U.S. state of Texas. The original adobe structure was a private residence dating back to the early 19th century. It was purchased in 1848 by Benjamin Leaton, who adapted it as a fortress. Fort Leaton was the Presidio County original seat of government. Through murders, financial difficulties and abandonment, the structure changed hands numerous times. In 1967, it was deeded to the state of Texas and opened to the public in 1978 as a Texas State Historic Site. It was added to the National Register of Historic Places listings in Presidio County, Texas on June 18, 1973. 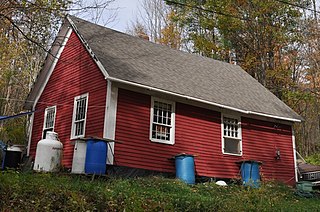 The Cote House is a historic house on Goshen Center Road in Goshen, New Hampshire. Built about 1846 as a schoolhouse, it is one of a cluster of plank-frame houses in Goshen. The building served as a school until 1926, and is now a private residence. The house was listed on the National Register of Historic Places in 1985.

The Busey–Evans Residence Halls, historically known as the Women's Residence Hall and the West Residence Hall respectively, are historic dormitories at the University of Illinois at Urbana–Champaign. Busey Hall was built in 1916, while Evans Hall was built in 1926; a connector wing links the two buildings, and they are considered part of the same dormitory complex. James A. White designed Busey Hall, while Charles A. Platt designed Evans Hall; both architects played an important role in designing other buildings on the university's campus, and both chose the Georgian Revival style for their designs to match the campus's architectural theme. The Women's Residence Hall was the first residence hall on the university's campus; the all-female dormitory filled a need for women's housing at the university, which had been privately maintained and in short supply. The hall quickly filled up, and the West Residence Hall was built to provide additional space for female students. In 1937, the buildings were renamed for university trustees Mary E. Busey and Laura B. Evans. The residence halls were still in use as all-female student housing until the fall semester of 2019, when the Evans hall was designated as all male for the first time in its history to accommodate the closure of another all male residence hall on campus.