Ming poetry refers to the poetry of or typical of the Ming dynasty (1368–1644). [1] With over one million specimens of Ming poetry surviving today, the poetry of the Ming dynasty represents one of the major periods of Classical Chinese poetry, as well as an area of active modern academic research. Ming poetry (and Chinese art and literature in general) is marked by 2 transitional phases, the transition between the Yuan dynasty which was the predecessor to the Ming, and the Qing-Ming transition which eventually resulted in the succeeding Qing dynasty. Although in politico-dynastic terms, the dynastic leadership of China is historically relatively clear-cut, the poetic periods involved encompass the lifespans and works of poets whose lives and poetic output transcend both the end of one dynasty and the initiatory period of the next.

Following the collapse of the Mongol-led Yuan dynasty, and upon its establishment, the Ming dynasty for much or most of its existence represents an era of orderly government and social stability. During the Ming dynasty the arts flourished, including painting, music, literature, dramatic theater, and poetry. Eventually, the Ming capital Beijing fell in 1644, together with most of the rest of the country; however, regimes loyal to the Ming throne — collectively called the Southern Ming — survived until 1662, the year finalizing the replacement of the Ming dynasty by the Qing dynasty, by the Manchu conquest of China.

Leading Ming poets include Gao Qi, Li Dongyang, and the publisher-poet Yuan Hongdao. Representatives of the dramatist-poet tradition include Tang Xianzu and Li Yu. Li Yu is also a prime example of the Ming-Qing transition's emotional outpouring when disorder swept away Ming stability as the incoming dynasty's Manchu warriors conquered from North to South. Ming representatives of the painter-poet tradition include Shen Zhou, Tang Yin, and Wen Zhengming. Interest in Tang poetry was expressed by the publication of several important anthologies, including Gao Bing's Graded Compendium of Tang Poetry (Tangshi Pinhui, 唐詩品彙).

From the late Ming onwards, there was a new interest in women's writings and an increasing number of female poets appeared. Male literati edited anthologies of women's poems, however such actions were shocking to many orthodox thinkers. [2] The literati celebrated women's works as embodying desirable qualities that men lacked, such as innocence, the childlike mind (童心), xingling (性灵) and emotions. [3] Many of these well-known writers were also courtesans, [4] including Liu Rushi, Wang Wei, Dong Xiaowan and Gu Mei. [5]

The area of Ming poetry is one in which there are certain acknowledged major poets representative of the era; however, it is also an era associated with a dynamic of ongoing scholarly research, as well as less formal investigation.

The nobility of China was an important feature of the traditional social structure of Imperial China.

Li Zicheng, born Li Hongji, also known by the nickname, "Dashing King", was a Chinese rebel leader who overthrew the Ming dynasty in 1644 and ruled over northern China briefly as the emperor of the short-lived Shun dynasty before his death a year later.

Xue Tao, courtesy name Hongdu (洪度/宏度) was a Chinese poet and courtesan of the Tang dynasty. She was one of the most famous women poets of Tang poetry, along with Yu Xuanji and Li Ye.

The Qing conquest theory is a theory proposed by Chinese academics that attempts to explain why China fell behind during the Qing dynasty. The theory also tries to explain the Great Divergence, the overtaking of China by the Western world as the major economic and industrial world power during the 19-20th centuries. Specifically, the theory seeks to explain how Europe could experience an industrial revolution, but China did not. Theory supporters claim that although the prosperous Song and Ming dynasties moved China toward a modern age, the restrictions placed on commerce and industry and the persecution of non-orthodox thought after the Transition from Ming to Qing caused the country to stagnate and fall behind the West.

The Affaire in the Swing Age, also known as The Dynasty or Love Against Kingship, is a 2003 Chinese television series based on the novel Jiangshan Fengyu Qing by Zhu Sujin, who was also the screenwriter for the series. The series depicts the events in the transition of the Ming dynasty to the Qing dynasty in China, focusing on the lives of historical figures such as Li Zicheng, Wu Sangui, Chen Yuanyuan, the Chongzhen Emperor and Huangtaiji.

Zhao Yi was a poet, historian, and critic during the Qing Dynasty in China. Zhao is notable for his innovative poetry, his historical writings, and for espousing unconventional views on various aspects of Chinese dynastic history. 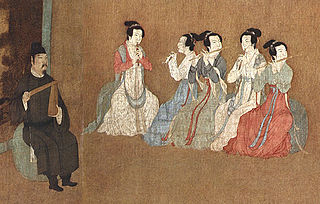 Hanfu refers to the historical Han clothing styles of China. The Han Chinese historically wore a robe or a shirt for the upper garment, while the lower garment was commonly a pleated skirt. Since the Han dynasty, Chinese clothing had developed varied styles and exquisite textile techniques, particularly on silk, and absorbed favorable elements in foreign cultures. Ancient Chinese clothing was also influential to other traditional East Asian clothing such as the Japanese wafuku and Korean hanbok, as well as traditional Southeast Asian clothing such as the Vietnamese Áo giao lĩnh.

Li Ye, also known by her courtesy name Li Jilan (李季蘭), was a Tang dynasty Chinese poet, Taoist nun, courtesan, and entertainer who was known for her talent in poetry as well as her beauty. In the tumultuous years of the late Tang, she was accused of treason for poems denigrating the imperial house of Tang that the rebel leader Zhu Ci forced her to write. She was condemned to death and executed in 784. Li is one of the few Tang-dynasty women whose poetry has survived. 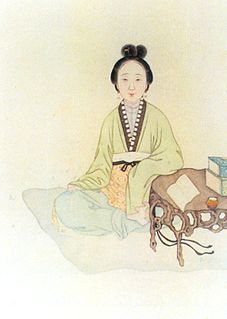 The Eight Beauties of Qinhuai were eight famous courtesans during the Ming-Qing transition period who resided along the Qinhuai River in Nankin. As well as possessing great beauty, they were all skilled in literature, poetry, fine arts, dancing and music.