The minister of Finance, originally known as colonial treasurer, is the head of the New Zealand Treasury, responsible for producing an annual New Zealand budget outlining the government's proposed expenditure. The position is often considered to be the most important cabinet post after that of the prime minister. [2]

The current Minister of Finance is Grant Robertson. There are also three associate minister roles; they are currently held by David Parker, Shane Jones and James Shaw. [3]

Some analysts, such as Jonathan Boston, claim that the Minister of Finance can sometimes hold more influence than the Prime Minister, if the conditions are right. Gordon Coates, Finance Minister in the early 1930s, was sometimes such a figure. Some political scientists, such as Boston, believe that in the government of David Lange, Minister of Finance Roger Douglas held more power than was proper, and that the Treasury was using its control of government finances to take a supervisory role across the whole administration. It was probably for this reason that Lange's successor, Geoffrey Palmer, established the Department of the Prime Minister and Cabinet, which could offer the Prime Minister advice independent of that given by individual ministers.

The office of Minister of Finance has existed since 1841. [5] Apart from the office of Prime Minister itself, the only other cabinet posts to have existed since the first cabinet are those of Attorney-General and Minister of Internal Affairs. Originally, the holder of the post was designated "Colonial Treasurer", but this term was replaced with "Minister of Finance" shortly after New Zealand ceased to be a Colony and became a Dominion. This occurred in 1907, during the cabinet of Joseph Ward.

Traditionally Ministers of Finance rank second or third in seniority lists within Westminster-style Cabinets, although initially Harry Lake was ranked at sixth and his successor Robert Muldoon was ranked at eighth; both because of their short service to date in Parliament, and because Keith Holyoake saw Muldoon as too arrogant and ambitious for his own good.

In the coalition governments formed in 1996 and 2017, responsibility for Finance was shared between the parties. After the 1996 elections, the role of the Minister of Finance was formally split between two portfolios – that of Minister of Finance and that of Treasurer. The position of Treasurer was senior to that of the Minister of Finance, and was created as part of the coalition agreement between the National Party and New Zealand First. It was established especially for Winston Peters, leader of New Zealand First, who demanded it as part of the deal. When Peters ended the coalition, the position reverted to the National Party. After the change of government in 1999, both positions were held concurrently by Michael Cullen before they were combined into the old Minister of Finance portfolio in 2002. [8] Both New Zealand First and the Green Party won an associate Finance role in the negotiations that formed the Sixth Labour Government. 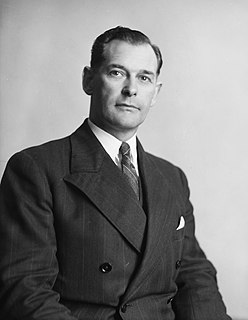 Sir Robert David Muldoon was a New Zealand politician who served as the 31st Prime Minister of New Zealand, from 1975 to 1984, while Leader of the National Party. 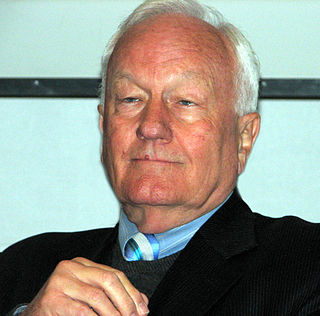 The Cabinet of New Zealand is the New Zealand Government's body of senior ministers, responsible to the New Zealand Parliament. Cabinet meetings, chaired by the prime minister, occur once a week; in them, vital issues are discussed and government policy is formulated. Though not established by any statute, Cabinet has significant power in the New Zealand political system and nearly all bills proposed by Cabinet in Parliament are enacted. 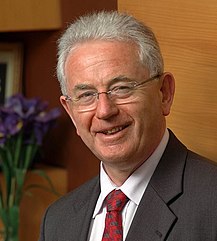 Sir Michael John Cullen is a former New Zealand politician. He served as Deputy Prime Minister of New Zealand, also Minister of Finance, Minister of Tertiary Education, and Attorney-General. He was the Deputy Leader of the Labour Party from 1996 until November 2008, when he resigned following a defeat in the general election. He resigned from Parliament in April 2009, to become the deputy chairman of New Zealand Post from 1 November 2009 and chairman from 1 November 2010. On 6 March 2020 he announced that he had resigned from the Lakes and Bay of Plenty district health boards respectively. At the same time he also announced that he had been diagnosed with stage 4 small-cell lung cancer, which had also spread to his liver.

Sir John Ross Marshall, commonly known as Jack Marshall, was a New Zealand politician of the National Party. He entered Parliament in 1946 and was first promoted to Cabinet in 1951. After spending twelve years as Deputy Prime Minister, he served as the 28th Prime Minister from February until December 1972. 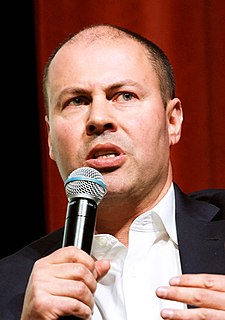 The Treasurer of Australia is the minister in the Government of Australia responsible for government expenditure and for collecting revenue. The Treasurer plays a key role in the economic policy of the government. The current Australian Treasurer is Josh Frydenberg whose term began on 24 August 2018.

Sir William Francis Birch, usually known as Bill Birch, is a New Zealand retired politician. He served as Minister of Finance from 1993 to 1999 in the fourth National Government.

David William Parker is a New Zealand Labour Party politician who currently serves as Attorney-General, Minister for the Environment and Minister for Trade and Export Growth in the Sixth Labour Government. He previously served as a Cabinet Minister in the Fifth Labour Government and as interim Leader of the Labour Party from September to November 2014. He represented the Otago electorate at the 47th Parliament and has since served as a list MP. 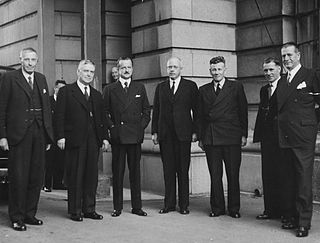 Ministers, in the New Zealand Government, are members of Parliament (MPs) who hold ministerial warrants from the Crown to perform certain functions of government. This includes formulating and implementing policies and advising the governor-general. Ministers collectively make up the executive branch of the New Zealand state. The governor-general is obliged to follow the advice of the prime minister on the appointment and dismissal of ministers. 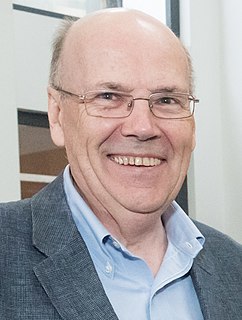 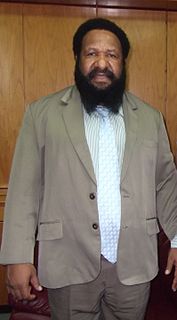 Don Pomb Polye was a senior Papua New Guinean politician from Enga Province. He has been a Cabinet Minister under two Prime Ministers, and was briefly Deputy Prime Minister from July to December 2010. Earlier, he has held Foreign Affairs, Immigration, Transport, Civil Aviation, Finance and Treasury portfolios. 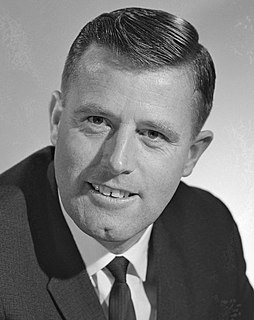 Thomas Philip Shand was a New Zealand politician of the National Party.