Minister of Foreign Affairs (Democratic Republic of the Congo)

The following is a list of foreign ministers of the Democratic Republic of the Congo since its founding in 1960: [1]

Zaire, officially the Republic of Zaire, was the name of a sovereign state between 1971 and 1997 in Central Africa that is now known as the Democratic Republic of the Congo. It was, by area, the largest country in sub-Saharan Africa, the third-largest in all of Africa, and the 11th-largest in the world. With a population of over 23 million inhabitants, Zaire was the most-populous officially Francophone country in the world, as well as one of the most populous in Africa.

Évariste Leon Kimba Mutombo was a Congolese journalist and politician who served as Foreign Minister of the State of Katanga from 1960 to 1963 and Prime Minister of the Democratic Republic of the Congo from 13 October to 25 November 1965. Kimba was born in 1926 in Katanga Province, Belgian Congo. Following the completion of his studies he worked as a journalist and became editor-in-chief of the Essor du Congo. In 1958 he and a group of Katangese concerned about domination of their province by people from the neighbouring Kasaï region founded the Confédération des associations tribales du Katanga (CONAKAT), a regionalist political party. In 1960 the Congo became independent and shortly thereafter Moise Tshombe declared the secession of the State of Katanga. Kimba played an active role in the separatist state's government as its Minister of Foreign Affairs and participated in numerous talks with the central government aimed at political reconciliation. Following the collapse of the secession in early 1963, Kimba had a falling out with Tshombe and took up several ministerial posts in the new province of South Katanga.

The Minister of Defence and Veterans is a minister of the DR Congo government responsible for implementation of government defence policy and supervises the Armed Forces of the Democratic Republic of the Congo.

Sylvestre Ilunga Ilunkamba is a Congolese politician who was appointed as the Prime Minister of the Democratic Republic of the Congo in May 2019, formally establishing his government in August 2019. He has had a long political career going back to the 1970s, having held a number of ministerial cabinet posts, and was previously a professor at the University of Kinshasa since 1979. Ilunga has also been the secretary general of Congo's national railway company. He has a reputation as an experienced public servant and technocrat, as well as an ally of former President Joseph Kabila. 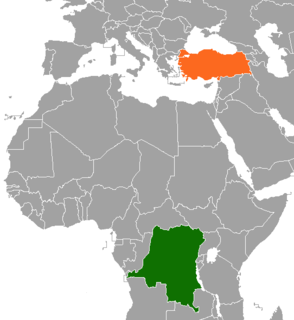 Democratic Republic of the Congo–Turkey relations are the foreign relations between the DR Congo and Turkey. Turkey has an embassy in Kinshasa since 1974, and the DR Congo opened its embassy in Ankara in 2011.