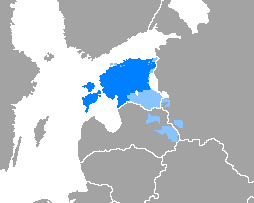 The Estonian language is the official language of Estonia, spoken natively by about 1.1 million people: 922,000 people in Estonia and 160,000 outside Estonia. It is a Southern Finnic language and is the second most spoken language among all the Finnic languages.

The Ministry of Foreign Affairs of Estonia is a Cabinet-level governmental agency in Estonia in charge of conducting and designing Estonian Foreign policy. 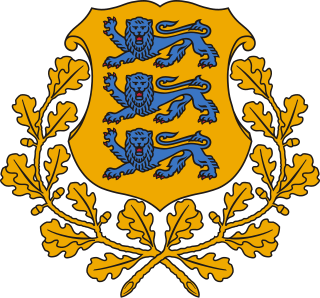 The Prime Minister of Estonia is the head of government of the Republic of Estonia. The prime minister is nominated by the President after appropriate consultations with the parliamentary factions and confirmed by the Parliament. In case of disagreement, the Parliament can reject the President's nomination and choose their own candidate. In practice, since the Prime Minister must maintain the confidence of Parliament in order to remain in office, he is usually the leader of the senior partner in the governing coalition. The current Prime Minister is Jüri Ratas of the Centre Party. 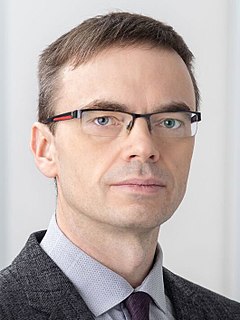 Sven Mikser is an Estonian politician.

The foreign policy of Denmark is based on its identity as a sovereign state in Europe, the Arctic and the North Atlantic. As such its primary foreign policy focus is on its relations with other nations as a sovereign state compromising the three constituent countries: Denmark, Greenland and the Faroe Islands. Denmark has long had good relations with other nations. It has been involved in coordinating Western assistance to the Baltic states. The country is a strong supporter of international peacekeeping. Danish forces were heavily engaged in the former Yugoslavia in the UN Protection Force (UNPROFOR), with IFOR, and now SFOR. Denmark also strongly supported American operations in Afghanistan and has contributed both monetarily and materially to the ISAF. These initiatives are a part of the "active foreign policy" of Denmark. Instead of the traditional adaptative foreign policy of The unity of the Realm, Kingdom of Denmark is today pursuing an active foreign policy, where human rights, democracy and other crucial values is to be defended actively. In recent years, Greenland and the Faroe Islands have been guaranteed a say in foreign policy issues, such as fishing, whaling and geopolitical concerns.

Lesotho's geographic location makes it extremely vulnerable to political and economic developments in South Africa. Its capital is the small city of Maseru. It is a member of many regional economic organizations including the Southern African Development Community (SADC) and the Southern African Customs Union (SACU). Lesotho also is active in the United Nations, the Organisation of African Unity, now the African Union, the Non-Aligned Movement, and many other international organizations. In addition to the Republic of Korea, the United States, South Africa, Ireland, People's Republic of China, Libya, and the European Union all currently retain resident diplomatic missions in Lesotho. Foreign relations of Lesotho are administered by the Ministry of Foreign Affairs and International Relations.

The Estonian Institute is a non-governmental and non-profit organisation based in Tallinn aiming to promote Estonian culture abroad. The institute was founded in 1988/1989 as a shadow foreign office for the Estonian independence movement by Lennart Meri, later first foreign minister and first president of Estonia after their Soviet occupation. Current director of the institute is Katrin Maiste.

Aleksander Warma VR I/3 was an Estonian navy officer, diplomat and painter.

Marina Kaljurand is an Estonian politician who served as Minister of Foreign Affairs in Taavi Rõivas' second cabinet as an independent. Earlier, she served as the Ambassador of Estonia to the United States, Russia, Mexico, Canada, Kazakhstan, and Israel.

The Ministry of Defence of the Republic of Estonia and its head, the Minister of Defence, are responsible for organizing national defence.The mission of the Ministry of Defence is to deter attacks against Estonia and ensure that the country is capable of defending itself against external threats. Estonian national defence is based on initial self-defence capability as well as membership in NATO.

Estonian-Greek relations are the relations between the Republic of Estonia and the Hellenic Republic. Greece recognised Estonia on May 19, 1922. Greece never recognised the Soviet annexation of Estonia. Both countries re-established diplomatic relations on October 2, 1991. In April 1997, Estonia has established an embassy in Athens. The Greek embassy in Tallinn opened in January 2005. Estonia has also 3 honorary consulates in Patras, Piraeus and Thessaloniki. Both countries are full members of NATO and the European Union.

Australia–Estonia relations are foreign relations between Australia and Estonia. Australia first recognised Estonia on 22 September 1921. Australia was among the first countries to re-recognise Estonia's independence on 27 August 1991. Both countries re-established diplomatic relations on 21 November 1991.

The Ministry of Foreign Affairs (MOFA) is a cabinet-level government ministry responsible for the implementation and management of Uganda's foreign policy and international activity.

Nordic identity in Estonia refers to opinions that Estonia is one of the Nordic countries or that it should/will be considered as such in the future. The current mainstream view outside of Estonia does not include it among them. Categorizing Estonia as a Nordic country is common in Estonia.