The following MPs have held the office of Minister of Railways: [1] [2]

Rails was a New Zealand-based monthly periodical covering rail transport in New Zealand published by Rails Publishing Ltd from August 1971, which in 1972 changed its name to Southern Press from August 1971 until December 2003. The company was jointly owned by Bob Stott and Robin Bromby; Bob Stott was Editor and ran the editorial content and Robin Bromby was Managing Editor mainly responsible for the business operation. 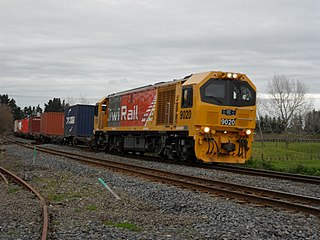 The Te Manatū WakaMinistry of Transport is the public service department of New Zealand charged with advising the government on transport policy. 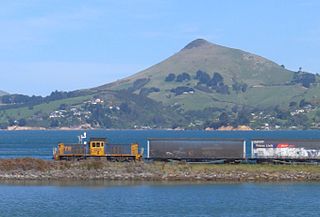 The Port Chalmers Branch was the first railway line built in Otago, New Zealand, and linked the region's major city of Dunedin with the port in Port Chalmers. The line is still operational today.

The Taonui Branch was a minor branch line railway in New Zealand's national network. Located in the Manawatu District of the North Island, it opened in 1879 and operated until 1895.

The Silver Star was a luxury passenger train that ran overnight between Auckland and Wellington on the North Island Main Trunk (NIMT) railway of New Zealand, operated by New Zealand Railways (NZR). The train ran from Monday 6 September 1971 until Sunday 8 June 1979. It replaced the Night Limited express passenger trains which provided a faster service than the ordinary express trains, by stopping at only six intermediate stations en route and not hauling a postal traffic as previous trains had.

Straits Air Freight Express (SAFE) was a cargo airline, established in 1950, named for its Cook Strait focus and connecting the North Island and South Islands of New Zealand's railway systems from the 1950s to the 1970s. The company was renamed Safe Air Limited in 1966 and diversified into aviation maintenance. In 1972 it was bought by the National Airways Corporation, which then merged with Air New Zealand. Safe Air continued to be operated as an independent entity by both owners. It ceased flying in 1990, but has continued to expand as a maintenance facility and now employs approximately 350 staff. In 2015 it was bought by the Australian arm of Airbus.

Interislander is a road and rail ferry service across New Zealand's Cook Strait, between Wellington in the North Island and Picton in the South Island. It is owned and operated by state-owned rail operator KiwiRail. Three roll-on roll-off (RORO) vessels operate the 50-nautical-mile route, taking about three hours to complete the crossing.

The Dunback and Makareao Branches were two connected branch line railways, part of New Zealand's national rail network. Located in the Otago region of the South Island, both lines were 15 km in length and shared the first 11 km. The Dunback Branch, also known as the Waihemo Branch, opened in 1885 and closed in 1968; the Makareao Branch, also known as the Inch Valley Railway or the Inch Valley Branch, opened in 1900 and operated for 89 years to 1989.

The NZR RM class Sentinel-Cammell was a steam-powered railcar operated by the New Zealand Railways Department (NZR). It was the only one of its type to operate in New Zealand, and one of only two steam railcars trialled in the country; the other was the Clayton steam railcar.

New Zealand Railways Corporation (NZRC) is the state-owned enterprise that owns the land beneath KiwiRail's railway network on behalf of the Crown. The Corporation has existed under a number of guises since 1982, when the old New Zealand Railways Department was corporatised followed by deregulation of the land transport sector. In 1986, the Corporation became a State-owned enterprise, required to make a profit. Huge job losses and cutbacks ensued, and the rail network, rail operations and ferry service of the Corporation were transferred to New Zealand Rail Limited in 1990. The Corporation retained ownership of the land beneath the railway network, and charged a nominal rental to New Zealand Rail, which was privatised in 1993, and renamed Tranz Rail in 1995. In 2004, following a deal with Tranz Rail's new owners Toll NZ, the Corporation took over responsibility for maintaining and upgrading the rail network once more, trading under the name ONTRACK. Negotiations with Toll over track access charges concluded after four years with no agreement reached, so the government purchased the entire rail and ferry operations, naming the service KiwiRail. ONTRACK's railway infrastructure and employees were then transferred to KiwiRail in 2008, which itself was initially a subsidiary of the Corporation. On 31 December 2012, the Corporation once again became the landowner.

The Rewanui Branch, sometimes referred to as the Rewanui Incline and known as the Point Elizabeth Branch in its early years, was a branch line railway located in the West Coast region of New Zealand's South Island. It branched from the Midland Line near its western terminus in Greymouth and ran up to Rewanui in the Paparoa Ranges. The branch closed in 1985 but the first six kilometres to Runanga remain in operation as part of the Rapahoe Branch.

The Seddonville Branch, later truncated as the Ngākawau Branch, is a branch line railway in the West Coast region of New Zealand's South Island. Construction began in 1874 and it reached its terminus at the Mokihinui Mine just beyond Seddonville in 1895. In 1981 it was closed past Ngākawau and effectively became an extension of the Stillwater–Westport Line, since formalised as the Stillwater–Ngākawau Line.

Ronald Leslie Bailey was a New Zealand politician of the Labour Party. 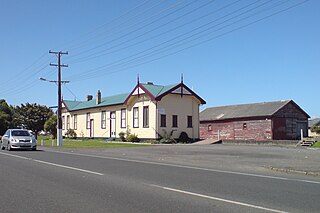 The Thames Branch railway line connected Thames, New Zealand, with Hamilton and was originally part of the East Coast Main Trunk railway. Part of the line between Morrinsville and Waitoa remains open and is in use as the Waitoa Branch line, connecting to the Fonterra Dairy Factory at Waitoa.

The Nelson–Blenheim notional railway (1957–1979) was part of the political management of the backlash from the New Zealand Railways Department's closure of the isolated Nelson Section, which ended hopes for a southern connection of Nelson to the rest of the South Island railway network. 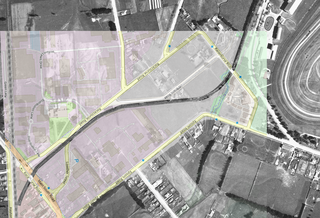 Railway electrification in New Zealand consists of three separate electric systems, all in the North Island. Electrification was initially adopted by the New Zealand Railways for long tunnels; the Otira Tunnel, the Lyttelton Rail Tunnel and the two Tawa Tunnels of the Tawa Flat Deviation. Electrification of Wellington suburban services started with the Johnsonville Line and Kapiti Line out of Wellington from the 1930s. Auckland suburban services were electrified in 2014–2015. Electrification of long-distance services on the North Island Main Trunk (NIMT) dates from 1986. New long tunnels, for example the Rimutaka Tunnel and the Kaimai Tunnel, were operated by diesels, and the Otira and Lyttelton Tunnels have converted to diesel operation.