The Ministry of Culture (French : Ministère de la Culture) is the ministry of the Government of France in charge of national museums and the monuments historiques . Its goal is to maintain the French identity through the promotion and protection of the arts (visual, plastic, theatrical, musical, dance, architectural, literary, televisual and cinematographic) on national soil and abroad. Its budget is mainly dedicated to the management of the Archives Nationales (six national sites and hundred decentralised storage facilities) and the regional Maisons de la culture (culture centres).

Its main office is in the Palais-Royal in the 1st arrondissement of Paris on the Rue de Valois. [1] [2] It is headed by the Minister of Culture, a cabinet member. The current officeholder has been Roselyne Bachelot since July 6, 2020.

Deriving from the Italian and Burgundian courts of the Renaissance, the notion that the state had a key role to play in the sponsoring of artistic production and that the arts were linked to national prestige was found in France from at least the 16th century on. During the pre-revolutionary period, these ideas are apparent in such things as the creation of the Académie française, the Académie de peinture et de sculpture and other state-sponsored institutions of artistic production, and through the cultural policies of Louis XIV's minister Jean-Baptiste Colbert.

The modern post of Minister of Culture was created by Charles de Gaulle in 1959 and the first officeholders was the writer André Malraux. Malraux was responsible for realising the goals of the droit à la culture ("right to culture"), an idea which had been incorporated in the Constitution of France and the Universal Declaration of Human Rights (1948), by democratising access to culture, while also achieving the Gaullist aim of elevating the "grandeur" ("greatness") of post-war France. To this end, he created numerous regional cultural centres throughout France and actively sponsored the arts. Malraux's artistic tastes included the modern arts and the avant-garde, but on the whole he remained conservative.

Under President François Mitterrand the Minister of Culture was Jack Lang who showed himself to be far more open to popular cultural production, including jazz, rock and roll, rap music, graffiti, cartoons, comic books, fashion and food. His famous phrase "économie et culture, même combat" ("economy and culture: it's the same fight") is representative of his commitment to cultural democracy and to active national sponsorship and participation in cultural production. In addition to the creation of the Fête de la Musique and overseeing the French Revolution bicentennial (1989), he was in charge of the massive architectural program of the François Mitterrand years (the so-called Grands travaux or "Great Works") that gave permission for the building of the Bibliothèque nationale, the new Louvre, the Arab World Institute, the Musée d'Orsay, the Opéra-Bastille, the "Grande Arche" of La Défense (the Parisian business quarter), the new seat of the French Ministry for the Economy and Finance, the Jean-Marie Tjibaou Cultural Centre, and the Cité des Sciences et de l'Industrie and Cité de la Musique, both in the Parc de la Villette.

The Ministry of Jacques Toubon was notable for a number of laws (the "Toubon Laws") enacted for the preservation of the French language, both in advertisements (all ads must include a French translation of foreign words) and on the radio (35% of songs on French radio stations must be in French), ostensibly in reaction to the presence of English.

The following people were appointed as Minister of Culture of France:

Names of the Ministry of Culture

Since the French constitution does not identify specific ministers (merely speaking of "the minister in charge of" this or that), each government may label each ministry as they wish, or even have a broader ministry in charge of several governmental sectors. Hence, the ministry has gone through a number of different names:

The Ministry of Culture is made up of a variety of internal divisions, including:

Finally, the Ministry shares in the management of the National Centre of Cinema (Centre national de la cinématographie), a public institution. [3]

The Alliance française is run by the Ministry of Europe and Foreign Affairs. [4]

On the national level, the Ministry also runs:

The Ministry of Culture is responsible for, or a major sponsor of, a number of annual cultural activities, including the Fête de la Musique , the Maison de la culture de Grenoble, the Festival d'Avignon , the Public Establishment of the Palace, Museum and National Estate of Versailles, the Joconde (online database of objects in French museums), the Base Mérimée (database of listed heritage monuments), and the Maître d'art program.

Cruas is a commune near the river Rhône in the Ardèche department in southern France.

Châteauroux is the capital city of the French department of Indre, central France and the second-largest town in the province of Berry, after Bourges. Its residents are called Castelroussins.

Jumièges or ‘’’Baëmintenash/ Bohemontenash’’’ is a commune in the Seine-Maritime department in the Normandy region in north-western France.

Ars-en-Ré is a commune on the Île de Ré in the western French department of Charente-Maritime, in Nouvelle-Aquitaine.

Chamigny is a commune in the Seine-et-Marne department in the Île-de-France region in north-central France.

Vendres is a commune in the Hérault department in the Occitanie region in southern France.

Bengy-sur-Craon is a commune in the Cher department in the Centre-Val de Loire region of France.

Sargé-sur-Braye is a commune in the Loir-et-Cher department in central France. 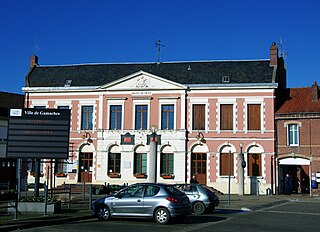 Gamaches is a commune in the Somme department in Hauts-de-France in northern France. 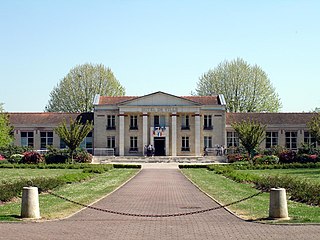 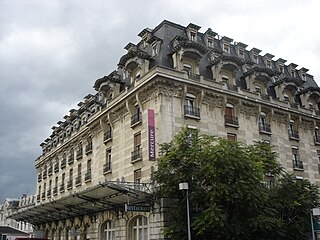 The Hôtel Mercure Lyon Centre Château Perrache, originally Hôtel Terminus, then Pullman Perrache, then Château Perrache, is a hotel of the AccorHotels group built in 1906. It is located on cours de Verdun in the 2nd arrondissement of Lyon. The hotel was used as the headquarters for the gestapo in Lyon during the Second World War. It is the eponym of the Marcel Ophüls film Hôtel Terminus: The Life and Times of Klaus Barbie about the gestapo in Lyon.

The Hôtel de Sully is a Louis XIII style hôtel particulier, or private mansion, located at 62 rue Saint-Antoine in the Marais, IV arrondissement, Paris. Built at the beginning of the 17th century, it is nowadays the seat of the Centre des monuments nationaux, the French national organization responsible for national heritage sites. It has been listed since 1862 as a monument historique by the French Ministry of Culture.

The Direction régionale des Affaires culturelles is a service of the French Minister of Culture in each region of France. Created by André Malraux, minister of Culture, on February 23, 1963, they are in charge of historical buildings, museums, cinema, theatre, art.

Loïc Vadelorge, born 26 November 1964, graduate from École Normale Supérieure Lettres et Sciences Humaines, is a French historian, teacher of contemporary history at the Paris 13 University, after having been Senior Lecturer at the Versailles Saint-Quentin-en-Yvelines University from 1998 to 2009 and at the University of Rouen from 1992 to 1994. 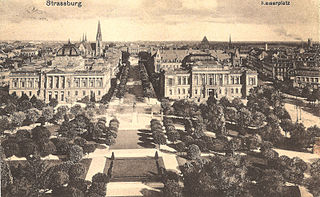 Place de la République is one of the main squares of the city of Strasbourg, France. It is surrounded on three sides by five buildings only, of which none is residential: the Palais du Rhin, the National and University Library, the Théâtre national de Strasbourg, the Préfecture of Grand Est and Bas-Rhin, and the tax center Hôtel des impôts. All of these buildings are classified as monuments historiques. The fourth side of the square is devoid of buildings.