Minkhaung of Prome (Burmese : ပြည် မင်းခေါင် [mɪ́ɴɡàʊɴ] ; died 1553) was the last king of Prome, who reigned three tumultuous years from 1539 to 1542. [2] He succeeded his brother Narapati in 1539. Minkhaung frantically prepared to defend against another attack by Toungoo Kingdom. He reinforced his already heavily fortified city of Prome (Pyay), and hired foreign mercenaries. Although he knew his nominal overlords, the Confederation of Shan States, would assist him, he continued the alliance with King Min Bin of Mrauk U begun by his late brother. Min Bin was married to Minkhaung's and Narapati's sister.

The Prome Kingdom was a kingdom that existed for six decades between 1482 and 1542 in present-day central Burma (Myanmar). Based out of the city of Prome (Pyay), the minor kingdom was one of the several statelets that broke away from the dominant Ava Kingdom in the late 15th century. Throughout the 1520s, Prome was an ally of the Confederation of Shan States, and together they raided Avan territory. After Ava fell to the Confederation armies in 1527, Prome itself became a tributary of the Confederation in 1532. In the late 1530s, Prome became ensnarled in the Toungoo–Hanthawaddy War (1534–41). Despite military assistance from the Confederation and the Mrauk U Kingdom, the small kingdom fell to the Toungoo (Taungoo) forces in 1542.

Narapati of Prome was king of Prome from 1532 to 1539. He seized the throne after his father Bayin Htwe was taken captive by the Confederation of Shan States in 1532 back to Upper Burma. Bayin Htwe escaped after the Confederation's leader Sawlon was assassinated by his ministers, and returned to Prome (Pyay), c. May 1533. But Narapati shut the gates against his father, who soon died in the adjoining forests.

In late 1541, Toungoo again laid siege to Prome. Prome's allies the Confederation and Mrauk U sent in help to break the siege. But Toungoo forces under the command of Gen. Bayinnaung defeated both armies. Mrauk U also sent in a naval flotilla that landed in Bassein (Pathein). Upon hearing of the Mrauk U army's defeat, the flotilla turned back. After a five months' siege, starvation set in. The besieged deserted the city in great numbers. On 19 May 1542 (5th waxing of Nayon 904 ME), Minkhaung surrendered. Minkhaung and his queen Thiri Hpone Htut were taken to Toungoo (Taungoo). [3]

Bayinnaung Kyawhtin Nawrahta was king of the Toungoo Dynasty of Burma (Myanmar) from 1550 to 1581. During his 31-year reign, which has been called the "greatest explosion of human energy ever seen in Burma", Bayinnaung assembled what was probably the largest empire in the history of Southeast Asia, which included much of modern-day Burma, the Chinese Shan states, Lan Na, Lan Xang, Manipur and Siam.

Pathein, formerly called Bassein, is the largest city and the capital of the Ayeyarwady Region, Myanmar (Burma). It is located 190 km (120 mi) west of Yangon on the bank of the Pathein River (Bassein), which is a western branch of the Irrawaddy River, the city has a population of 237,089. Although once part of the Mon kingdom, Pathein has few ethnic Mon residents today. The majority are of Bamar, Burmese Indians and Karen ethnicity. There are, however, notable minority Rakhine.

Mingyi Swe was viceroy of Toungoo (Taungoo) from 1540 to 1549 during the reign of his son-in-law King Tabinshwehti of Toungoo Dynasty. He was also the father of King Bayinnaung, as well as key viceroys in Bayinnaung's administration. He rose to the position of viceroy of the ancestral home of the dynasty, after having started out as a royal household servant of Tabinshwehti. All the Toungoo kings from Bayinnaung to Mahadhammaraza Dipadi descended from him.

Minkhaung remained under house arrest until 1553 when he was executed by Bayinnaung. Thiri Hpone Htut became a queen of Bayinnaung with the title of Sanda Dewi. [4]

The following is his ancestry as reported in the Hmannan Yazawin chronicle, which in turn referenced contemporary inscriptions. [note 1]

Mingyi Nyo was the founder of Toungoo dynasty of Burma (Myanmar). Under his 45-year leadership (1485–1530), Toungoo (Taungoo), grew from a remote backwater vassal state of Ava Kingdom to a small but stable independent kingdom. In 1510, he declared Toungoo's independence from its nominal overlord Ava. He skillfully kept his small kingdom out of the chaotic warfare plaguing Upper Burma. Toungoo's stability continued to attract refugees from Ava fleeing the repeated raids of Ava by the Confederation of Shan States (1490s–1527). Nyo left a stable, confident kingdom that enabled his successor Tabinshwehti to contemplate taking on larger kingdoms on his way to founding the Toungoo Empire.

Shwenankyawshin Narapati was king of Ava from 1501 to 1527. His reign saw the disintegration of the Ava Kingdom. He spent much of his reign fighting back the attacks from the Confederation of Shan States. But his efforts ultimately proved unsuccessful. The king died fighting while defending his capital from Confederation attacks, after which Ava Kingdom was taken over by the Confederation.

Sithu Kyawhtin was the last king of Ava from 1551 to 1555. He came to power by overthrowing King Narapati III in 1551, the culmination of his six-year rebellion (1545–1551) with the support of the Shan state of Mohnyin.

Mingyi Swa of Prome was viceroy of Prome from 1446 to 1482 during the reigns of kings Narapati I, Thihathura I and Minkhaung II of Ava.

Sanda Dewi was one of the three principal queens of King Bayinnaung of Burma from 1553 to 1581. She was also a queen of the last two kings of Prome Kingdom from 1532 to 1542. She was the maternal grandmother of Natshinnaung, king of Toungoo.

Thado Dhamma Yaza I was viceroy of Prome (Pyay) from 1542 to 1550 during the reign of his son-in-law King Tabinshwehti of Toungoo Dynasty of Burma (Myanmar), and the self-proclaimed king of the city-state from 1550 to 1551. After the death of Tabinshwehti in 1550, the man who started out as a royal household servant of Tabinshwehti in 1516 declared himself king of Prome with the style of Thado Thu, and did not submit to Bayinnaung, Tabinshwehti's chosen successor. His fortified city-state fell to Bayinnaung's forces in 1551 after a six-month battle. He was executed on the order of Bayinnaung, who later regretted the decision.

Minkhaung II of Toungoo was viceroy of Toungoo (Taungoo) from 1549 to 1551 and from 1552 to 1584 during the reigns of kings Tabinshwehti, Bayinnaung and Nanda of Toungoo Dynasty of Burma (Myanmar). He briefly revolted against his eldest half-brother Bayinnaung from 1550 to 1551 but was pardoned by Bayinnaung. Alongside his brothers Bayinnaung, Minye Sithu, Thado Dhamma Yaza II, Thado Minsaw and his nephew Nanda, he fought in nearly every campaign between 1552 and 1584 that rebuilt, expanded and defended the Toungoo Empire.

Laygyun Mibaya was the chief queen of Viceroy Minkhaung II of Toungoo. Self-proclaimed kings of Toungoo Minye Thihathu II and Natshinnaung were her son and grandson, respectively. 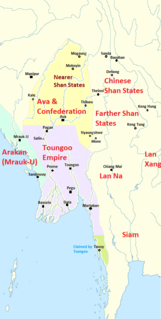 The Toungoo–Ava War (1538–1545) was a military conflict that took place in present-day Lower and Central Burma (Myanmar) between the Toungoo Dynasty, and the Ava-led Confederation of Shan States, Hanthawaddy Pegu and Arakan (Mrauk-U). Toungoo's decisive victory gave the upstart kingdom control of all of central Burma, and cemented its emergence as the largest polity in Burma since the fall of Pagan Empire in 1287.

Atula Thiri Maha Yaza Dewi of Ava was the chief queen consort of King Narapati I of Ava from 1442 to 1468. She was the mother of King Thihathura of Ava and King Thado Minsaw of Prome, and a maternal aunt of King Leik Munhtaw of Hanthawaddy. King Alaungpaya, the founder of Konbaung Dynasty, was a tenth generation descendant of the queen.

U Kala is a Burmese historian and chronicler best known for compiling the Maha Yazawin, the first extensive national chronicle of Burma. U Kala single-handedly revolutionized secular Burmese historiography and ushered in a new generation of private chroniclers, including Buddhist monks and laymen.