Sasaki was born in Hiroshima Prefecture and studied at Shudo Junior and Senior High School. He graduated from the 26th class of Imperial Japanese Army Academy in 1914 and served as a junior officer wth the IJA 5th Cavalry Regiment. He graduated from the 35th class of the Army Staff College in 1923, and subsequently served in administrative positions within the Imperial Japanese Army General Staff. He was sent as a military attaché to the Soviet Union and Poland in the 1920s, returning to the General Staff afterwards. He was promoted to colonel in August 1937 and to major general in August 1939, when he was attached to the Army Ordnance Headquarters.

In October 1939, Sasaki became commander of the IJA 4th Cavalry Brigade, which was active in the Second Sino-Japanese War. In December 1940, he became Chief of Staff of the IJA 6th Army. Assigned to Hailar, in Inner Mongolia which was also the site of an extensive Japanese static military fortification system, it was primarily a reserve and training garrison force. He returned to Japan in July 1942 to the staff of the Armored Warfare Department within the Army Ministry, and promoted the development of tanks and armored warfare within the Japanese military. [1]

However, as the war situation continued to deteriorate for the Japanese military in the Solomon Islands, Sasaki was reassigned to command the Southern Detachment in May 1943. He led the Japanese forces during the Battle of New Georgia from June 1943 to August 1943. After fighting an effective, but ultimately unsuccessful delaying campaign, his forces retreated to Kolombangara, only to be bypassed and left to starve, with little chance of reinforcement or resupply. He and his surviving forces managed to successfully escape by barge to Choiseul and Bougainville and then to Rabaul. In the Battle of New Georgia his outnumbered forces stood off nearly four Allied divisions and successfully evacuated 9,400 men to fight again. In the official history of the United States Army, Sasaki was evaluated with uncharacteristic effusiveness that "the obstinate General Sasaki, who disappears from these pages at this point, deserved his country's gratitude for his gallant and able conduct of the defense." [2]

From November 1943, he was on the staff of the IJA 8th Area Army at Rabaul, where he remained to the end of the war. Sasaki was promoted to lieutenant general in October 1944. [3] Sasaki died in 1961.

Operation Cartwheel (1943–1944) was a major military operation for the Allies in the Pacific theatre of World War II. Cartwheel was an operation aimed at neutralising the major Japanese base at Rabaul. The operation was directed by the Supreme Allied Commander in the South West Pacific Area (SWPA), General Douglas MacArthur, whose forces had advanced along the northeast coast of New Guinea and occupied nearby islands. Allied forces from the Pacific Ocean Areas command, under Admiral Chester W. Nimitz, advanced through the Solomon Islands toward Bougainville. The Allied forces involved were from Australia, the Netherlands, New Zealand, the US and various Pacific Islands.

The New Georgia campaign was a series of land and naval battles of the Pacific campaign of World War II between Allied forces and the Empire of Japan. It was part of Operation Cartwheel, the Allied strategy in the South Pacific to isolate the Japanese base around Rabaul. The campaign took place in the New Georgia group of islands, in the central Solomon Islands and followed the Allied capture of the Russell Islands. The main fighting took place on New Georgia island itself, although significant actions also took place around the island chain throughout the campaign.

Hatazō Adachi was a general in the Imperial Japanese Army during World War II. 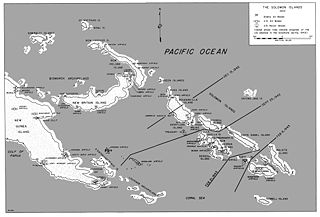 Jinichi Kusaka, was an admiral in the Imperial Japanese Navy during World War II. Fellow Admiral Ryūnosuke Kusaka was his cousin.

AirSols was a combined, joint command of Allied air units in the Solomon Islands campaign of World War II, from April 1943 to June 1944. It was subordinate to the Allied but U.S.-led Commander, South Pacific Area, itself part of Pacific Ocean Areas. AirSols superseded and absorbed the Cactus Air Force, which controlled Allied air units in the Solomons during 1942–43. AirSols was made up of United States Navy (USN), United States Marine Corps (USMC), the Royal New Zealand Air Force (RNZAF) and the Thirteenth Air Force, United States Army Air Forces (USAAF) forces. 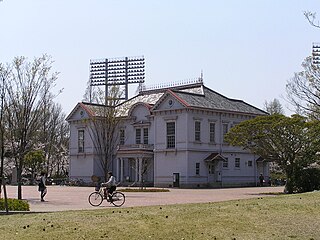 The 17th Division was an infantry division in the Imperial Japanese Army. Its tsūshōgō code name was the Moon Division. The 17th Division was one of two infantry divisions raised by the Imperial Japanese Army immediately after the Russo-Japanese War (1904–1905). The division received its colors on 13 November 1907. Its original headquarters was in a suburb of the city of Okayama, and its troops were recruited primarily from communities in the three prefectures of Okayama, Hiroshima, and Shimane. The first commander of the division was Lieutenant General Ichinohe Hyoe.

Masatane Kanda, was a lieutenant general in the Imperial Japanese Army during World War II. 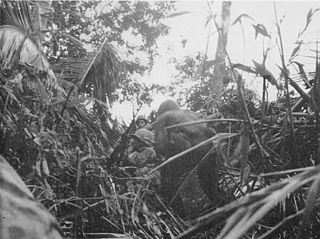 The Battle of the Koromokina Lagoon was fought between the United States Marine Corps and Imperial Japanese Army forces on Bougainville Island. It took place on 7–8 November 1943 during the Bougainville campaign.

The Battle of Wickham Anchorage took place during the New Georgia campaign in the Solomon Islands during the Pacific War from 30 June – 3 July 1943. During the operation US Marines and US Army troops landed by ship around Oleana Bay on Vangunu Island and advanced overland towards the anchorage where they attacked a garrison of Imperial Japanese Navy and Army troops. The purpose of the attack by the U.S. was to secure the lines of communication and supply between Allied forces involved in the New Georgia campaign and Allied bases in the southern Solomons. The U.S. forces were successful in driving the Japanese garrison from the area and securing the anchorage, which would later be used to stage landing craft for subsequent operations.

The Drive on Munda Point was an offensive by mainly United States Army forces against Imperial Japanese forces on New Georgia in the Solomon Islands from 2–17 July 1943. The Japanese forces, mainly from the Imperial Japanese Army, were guarding an airfield at Munda Point on the western coast of the island that the U.S. wished to capture as one of the key objectives of the New Georgia campaign. After landing around Zanana on 2 July from Rendova, U.S. troops began a westward advance towards the airfield at Munda. Held up by difficult terrain and stubborn Japanese defense, elements of three U.S. regiments advanced slowly along the Munda trail over the course of two weeks. The slow progress resulted in a reorganization of the U.S. forces assigned to the drive, and preparations were made for a corps-level offensive, but before this could be launched, the Japanese launched a counterattack on 17 July. 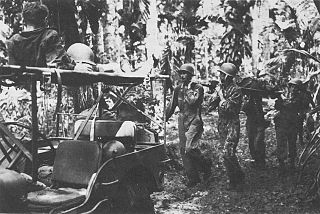 The New Georgia counterattack was a counterattack on 17–18 July 1943 by mainly Imperial Japanese Army troops against United States Army forces during the New Georgia campaign in the Solomon Islands. The U.S. and its allies were attempting to capture an airfield constructed by the Japanese at Munda Point on New Georgia with which to support further advances towards the main Japanese base around Rabaul as part of Operation Cartwheel. 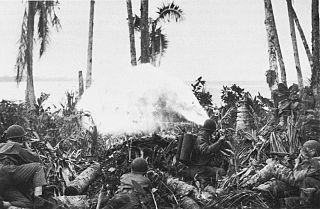 The Battle of Munda Point was a battle, from 22 July – 5 August 1943, between primarily United States Army and Imperial Japanese Army forces during the New Georgia Campaign in the Solomon Islands in the Pacific War. The battle took place following a landing by U.S. troops on the western coast of New Georgia from Rendova, as part of an effort to capture the Japanese airfield that had been constructed at Munda Point. This advance had become bogged down and while the Allies brought forward reinforcements and supplies, the Japanese had launched a counterattack on 17–18 July. This effort was ultimately unsuccessful and afterwards U.S. forces launched a corps-level assault to reinvigorate their effort to capture the airfield. Against this drive, Japanese defenders from three infantry regiments offered stubborn resistance, but were ultimately forced to withdraw, allowing U.S. forces to capture the airfield on 5 August. The airfield later played an important role in supporting the Allied campaign on Bougainville in late 1943.

Tsutomu Akinaga was a general in the Imperial Japanese Army, commanding the Japanese ground forces on Bougainville of 1945 in the closing months of the war.

Iwao Matsuda was a general in the Imperial Japanese Army, commanding Japanese ground forces in the Southwest Pacific during the closing months of World War Two.

Kesao Kijima was a general in the Imperial Japanese Army, commanding Japanese ground forces on Bougainville of 1945 in the closing months of the war.

Shun Iwasa was a general in the Imperial Japanese Army, commanding Japanese ground forces on Bougainville of 1945 in the closing months of the war.