Miquelon Airport (French : Aéroport de Miquelon) ( IATA : MQC, ICAO : LFVM) is a regional airport on Miquelon Island that the commune (municipality) of Miquelon-Langlade, in the French overseas community ( collectivité d'outre-mer ) of Saint Pierre and Miquelon, off the eastern coast of North America at the edge of the Grand Banks of Newfoundland.

There are no direct flights from mainland France. Connecting flights (with Air Canada, Air France, Air Transat or Corsair International) to mainland France required a transfer via Saint-Pierre onroute to Montréal–Trudeau airport, or catch a seasonal flight once weekly from Saint-Pierre to Paris.

The airport's runways are capable of handling turboprop or small jet aircraft only.

Saint Pierre and Miquelon, officially the Territorial Collectivity of Saint-Pierre and Miquelon, is a self-governing territorial overseas collectivity of France in the North-western Atlantic Ocean near the Canadian province of Newfoundland and Labrador. It is the only remaining vestige of French sovereignty in North America. Its residents are French citizens; the collectivity is a full member of the National Assembly and participates in senatorial and presidential elections. It covers 242 km2 (93 sq mi) of land and shores and has a population of 6,008 as of the March 2016 census. 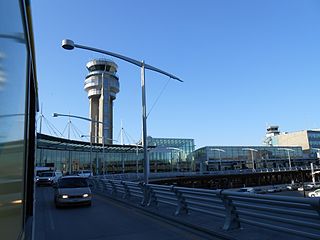 Montréal–Trudeau International Airport or Montréal–Trudeau, formerly known and still commonly referred to as Montréal–Dorval International Airport, is an international airport in Dorval, Quebec, Canada. It is the only Transport Canada designated international airport serving Montreal and is situated 20 km (12 mi) from Downtown Montreal. The airport terminals are located entirely in the suburb of Dorval, while one runway is located in the Montreal borough of Saint-Laurent. Air Canada, the country's flag carrier, also has its corporate headquarters complex on the Saint-Laurent side of the airport. It also serves Greater Montreal and adjacent regions in Quebec and eastern Ontario, as well as the states of Vermont and northern New York in the United States. The airport is named in honour of Pierre Elliott Trudeau, the 15th Prime Minister of Canada and father of current Prime Minister Justin Trudeau.

Miquelon-Langlade is the larger and less populated of the two communes (municipalities) making up the French overseas collectivity of Saint Pierre and Miquelon, located to the south of Newfoundland in the Gulf of St. Lawrence. It consists of three geological islands: Miquelon, Langlade and Le Cap, connected with tombolos. The communal seat is the settlement of Miquelon, on the northern tip, where the entire island's permanent population of 591 is located. Miquelon Airport provides flights to Montreal and to nearby Saint-Pierre.

Kapalua Airport, also known as Kapalua–West Maui Airport, is a regional private use airport on the west side of the island of Maui in Hawaii. It is located five nautical miles north of Lahaina, in Maui County. Most flights to Kapalua Airport originate from commuter airports on the other Hawaiian islands by commercial commuter services, unscheduled air taxis, and general aviation.

Air Saint-Pierre is a French airline based in Saint-Pierre, Saint Pierre and Miquelon, a French overseas collectivity. The airline operates scheduled services between the islands of Saint-Pierre and Miquelon-Langlade and to Canada. Its main base is Saint-Pierre Airport, from which it serves six destinations. In addition to the collectivity's other airport, Miquelon Airport, it serves five airports in Canada. The airline operates a fleet of an ATR 42 for international services and a Reims-Cessna F406 on the inter-island service. 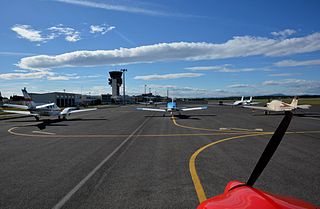 Bordeaux–Mérignac Airport is the international airport of Bordeaux, in south-western France. It is situated in the commune of Mérignac, 12 km (7.5 mi) west of Bordeaux, within the département of the Gironde. It mainly features flights to metropolitan and leisure destinations in Europe and Northern Africa and serves as a base for easyJet, Ryanair and Volotea airlines.

Cherbourg – Maupertus Airport or Aéroport de Cherbourg - Maupertus is an airport located 11 km east of Cherbourg-en-Cotentin, between Maupertus-sur-Mer and Gonneville. These are all communes of the Manche département in the Normandy région of France. The airport is managed by SNC-Lavalin Airports since 1 October 2009. 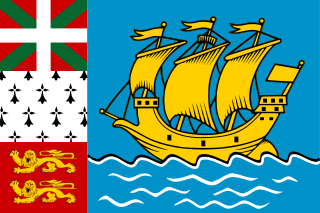 The following outline is provided as an overview of and topical guide to Saint Pierre and Miquelon:

The following is an alphabetical list of topics related to the French territorial collectivity of Saint Pierre and Miquelon. 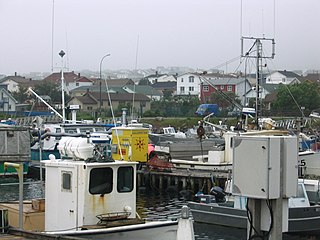 While Saint Pierre and Miquelon has no railway, it has 114 km (71 mi) of highways plus 45 km (28 mi) of unpaved roads. Its only major harbour is at Saint-Pierre although there is a smaller harbour at Miquelon. The dependency has no merchant marine but has two airports; the runway at Saint-Pierre Airport is 1,800 metres (5,910 ft) long, and at Miquelon Airport, 1,000 metres (3,280 ft).

Nikolai Airport is a state-owned public-use airport located one nautical mile (1.85 km) northeast of the central business district of Nikolai, a city in the Yukon-Koyukuk Census Area of the U.S. state of Alaska.

Overseas France consists of all the French-administered territories outside Europe, mostly remains of the French colonial empire. It includes island territories in the Atlantic, Pacific and Indian Oceans, French Guiana on the South American continent, and several peri-Antarctic islands as well as a claim in Antarctica. Excluding the district of Adélie Land, where French sovereignty is effective de jure by French law, but where the French exclusive claim on this part of Antarctica is frozen by the Antarctic Treaty, overseas France covers a land area of 119,396 km2 (46,099 sq mi) and accounts for 18.0% of the French Republic's land territory. Its exclusive economic zone (EEZ) of 9,825,538 km2 (3,793,661 sq mi) accounts for 96.7% of the EEZ of the French Republic. 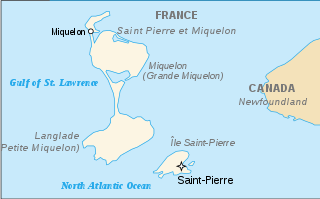