The Miraculous Medal (French : Médaille miraculeuse), also known as the Medal of Our Lady of Graces, is a devotional medal, the design of which was originated by Saint Catherine Labouré following her apparitions of the Blessed Virgin Mary [2] [3] in Rue du Bac, Paris, France, and made by goldsmith Adrien Vachette.

According to the teaching of the Catholic Church, the use of sacramentals such as this medal [4] prepares people to receive grace and disposes them to cooperate with it. [5]

Catherine Labouré stated that on 19 July 1830, the eve of the feast of Saint Vincent de Paul, she woke up after hearing the voice of one child calling her to the chapel, where she heard the Virgin Mary say to her, "God wishes to charge you with a mission. You will be contradicted, but do not fear; you will have the grace to do what is necessary. Tell your spiritual director all that passes within you. Times are evil in France and in the world." [6]

On 27 November 1830 Catherine reported that the Blessed Mother returned during evening meditations. She displayed herself inside an oval frame, standing upon a globe. She wore many rings set with gems [7] that shone rays of light over the globe. Around the margin of the frame appeared the words Ô Marie, conçue sans péché, priez pour nous qui avons recours à vous ("O Mary, conceived without sin, pray for us who have recourse to thee"). As Catherine watched, the frame seemed to rotate, showing a circle of twelve stars, a large letter M surmounted by a cross, and the stylized Sacred Heart of Jesus crowned with thorns and Immaculate Heart of Mary pierced with a sword. Asked why some of the gems did not shed light, Mary reportedly replied, "Those are the graces for which people forget to ask." Sister Catherine then heard the Virgin Mary ask her to take these images to her father confessor, telling him that they should be put on medallions, and saying "All who wear them will receive great graces." [8]

Sister Catherine did so, and after two years of investigation and observation of Catherine's ordinary daily behavior, the priest took the information to his archbishop without revealing Catherine's identity. The request was approved and medallions were designed and produced through goldsmith Adrien Vachette. [9] [10]

The chapel in which Saint Catherine experienced her visions is located at the mother house of the Daughters of Charity in Rue du Bac, Paris. [11] The incorrupt bodies of Saint Catherine Labouré and Saint Louise de Marillac, a co-founder of the Congregation of the Daughters of Charity of Saint Vincent de Paul, are interred in the chapel, which continues to receive daily visits from Catholic pilgrims today.

Pope John Paul II used a slight variation of the reverse image as his coat of arms, the Marian Cross, a plain cross with an M underneath the right-hand bar (which signified the Blessed Virgin at the foot of the Cross when Jesus was being crucified).

Properties of the medal

The elements of the design encapsulate major Marian tenets and of the Catholic faith. 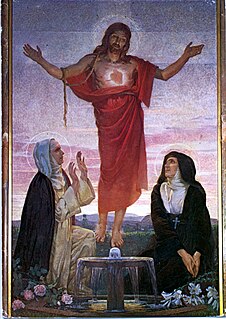 The devotion to the Sacred Heart is one of the most widely practiced and well-known Catholic devotions, wherein the heart of Jesus is viewed as a symbol of "God's boundless and passionate love for mankind". 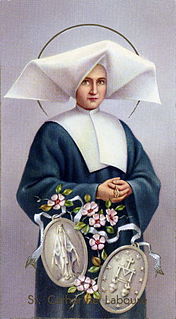 Saint Catherine Labouré, D.C.. was a French member of the Daughters of Charity of Saint Vincent de Paul and is a Marian visionary. She is believed to have relayed the request from the Blessed Virgin Mary to create the famous Miraculous Medal of Our Lady of Graces worn by millions of people around the world. 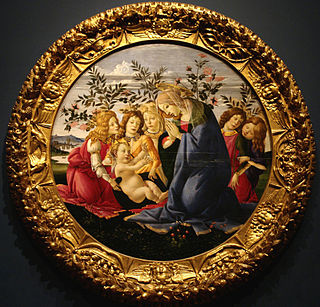 Marian devotions are external pious practices directed to the person of Mary, mother of Jesus, by members of certain Christian traditions. They are performed in Catholicism, Anglo-Catholicism, and Eastern Orthodoxy, Oriental Orthodoxy, but generally rejected in most Protestant denominations. 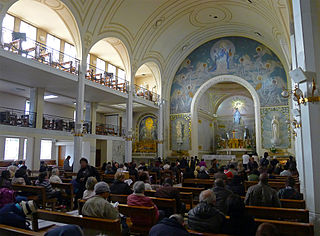 The Chapel of Our Lady of the Miraculous Medal in Paris, France, is the chapel where the Blessed Virgin Mary appeared to Saint Catherine Labouré in 1830 and requested the creation of the medal which came to be known as the Miraculous Medal. The Chapel was part of the mother house of the Daughters of Charity of Saint Vincent de Paul. Catherine Labouré was a seminary sister (novice) there when she had her apparitions. 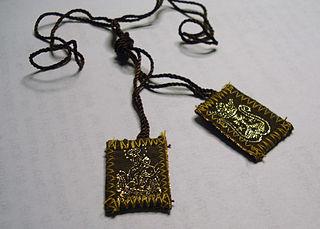 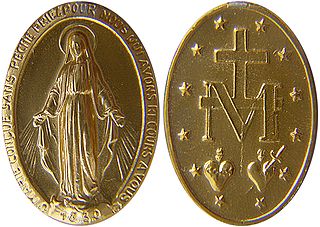 A Marian Cross is a term to describe a symbolic representation of the close connection of Mary, with the redemptive mission of Jesus. The letter "M" below the cross indicates Mary's presence at the foot of the cross.

Saint-Étienne-le-Laus is a commune in the Hautes-Alpes department in southeastern France.

In Catholic Mariology, the title Mediatrix refers to the intercessory role of the Blessed Virgin Mary as a mediator in the salvific redemption by her son Jesus Christ and that he bestows graces through her. Mediatrix is an ancient title that has been used by many saints since at least the 5th century. Its use grew during the Middle Ages and reached its height in the writings of saints Louis de Montfort and Alphonsus Liguori in the 18th century. 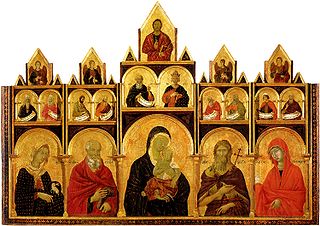 The Green Scapular is a Roman Catholic devotional article approved by Pope Pius IX in 1870. It is called a scapular due to its appearance, but is not descended from the scapulars that form part of the habit worn by religious orders. It can be more accurately described as a "cloth medal".

The Blue Scapular of the Immaculate Conception is a devotional scapular that traces its roots to Venerable Ursula Benincasa, who founded the Roman Catholic religious order of the Theatine Nuns. This scapular must have a blue woollen cloth and on one side bears a symbolization of the mystery of the Immaculate Conception of Our Lady and on the other the name of the Blessed Virgin Mary.

Stabat Mater is a feature in the Crucifixion of Jesus in art in which the Virgin Mary is depicted under the cross during the Crucifixion of Christ. In these depictions, the Virgin Mary is almost always standing to the right hand side of the body of her son Jesus on the Cross, with Saint John the Apostle standing to the left. It contrasts with the swoon of the Virgin, where she is seen fainting. This is only seen from the late medieval period onwards. 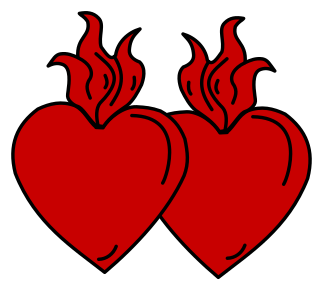 Adrien-Jean-Maximilien Vachette was a French goldsmith best known for the production of ornate gold boxes and the use of unusual and natural materials like tortoise shell.

Emma C. de Guzman is a Filipino Roman Catholic widow, laywoman, stigmatist and claimed Marian visionary. She is the co-founder, along with the late Sister Soledad Gaviola, of the Catholic lay group association La Pieta, dedicated to a Marian devotion under the title Mother of Love, Peace and Joy. Guzman claims to have first seen the Virgin Mary on the Feast of the Nativity of Mary in 1991.