Houston is a city in Texas County, Missouri, United States. The population was 2,081 at the 2010 census. It is the county seat of Texas County. 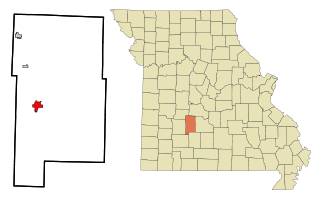 Buffalo is a city in Dallas County, Missouri, United States. The population was 3,084 at the 2010 census. It is the county seat of Dallas County.

Interstate 57 (I-57) is an Interstate Highway in Missouri and Illinois that parallels the old Illinois Central rail line for much of its route. It goes from Sikeston, Missouri, at Interstate 55 to Chicago, Illinois, at Interstate 94. I-57 essentially serves as a shortcut route for travelers headed between the south and Chicago, bypassing St. Louis, Missouri. Between the junction of I-55 and I-57 in Sikeston, Missouri and the junction of I-55 and I-90/94 in Chicago, I-55 travels for 436 miles (702 km), while the combination of I-57 and I-94 is only 396 miles (637 km) long between the same two points. In fact, both the control cities on the overhead signs, as well as destination mileage signs, reference Memphis along southbound I-57, even as far north as its northern origin at I-94 in Chicago. Likewise, at its southern end, Chicago is the control city listed for I-57 on signs on northbound I-55 south of Sikeston, Missouri, even though I-55 also goes to Chicago. 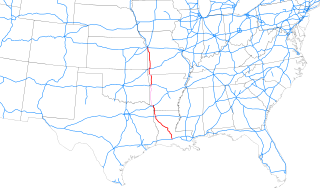 Interstate 49 (I-49) is a north–south Interstate Highway that exists in multiple segments: the original portion entirely within the state of Louisiana with an additional signed portion extending from Interstate 220 (I-220) in Shreveport to the Arkansas state line, four newer sections in Arkansas, and a new section that opened in Missouri. Its southern terminus is in Lafayette, Louisiana, at Interstate 10 while its northern terminus is in Kansas City, Missouri at Interstate 435 and Interstate 470. Portions of the remaining roadway in Louisiana, Arkansas, Missouri, and Texas, which will link Kansas City with New Orleans, are in various stages of planning or construction.

Interstate 72 (I-72) is an Interstate Highway in the midwestern United States. Its western terminus is in Hannibal, Missouri, at an intersection with U.S. Route 61; its eastern terminus is at Country Fair Drive in Champaign, Illinois. The route runs through the major cities of Decatur, Illinois and Springfield, Illinois. In 2006, the Illinois General Assembly dedicated all of Interstate 72 as Purple Heart Memorial Highway. The stretch between Springfield and Decatur is also called Penny Severns Memorial Expressway, and the section between Mile 35 and the Mississippi River is known as the Free Frank McWorter Historic Highway. 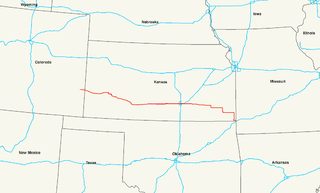 U.S. Route 400 (US 400) is a 481.306-mile-long (774.587 km) mostly east–west U.S. Highway, commissioned in 1994. The highway's western terminus is in Granada, Colorado, at an intersection with US 385. The highway's eastern terminus is southwest of Joplin, Missouri, near Loma Linda, at an interchange with Interstate 44, with which it shares with US 166. It originally ended in Garden City, Kansas; in 1996 it was extended to its current western terminus. Its route number is a "violation" of the usual AASHTO numbering scheme, as there is no "parent" US 0.

Route 39 is a two-lane highway in southwest Missouri. Its northern terminus is at U.S. Route 54 between Collins and El Dorado Springs at the community of Cedar Springs; its southern terminus is at the Arkansas state line where it continues as Highway 221.

Route 158 is a short highway in Butler County, Missouri. The eastern terminus is at Route 142 and the road runs straight west for 6 miles (10 km). The western terminus is at the intersection of U.S. Route 67 and U.S. Route 160 about 10 miles (16 km) southwest of Poplar Bluff. The town of Harviell is the only town on the highway. 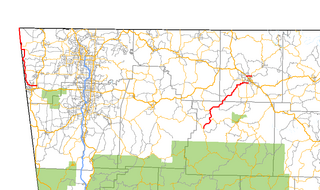 Highway 43 is a designation for three north–south state highways in northwest Arkansas. One segment of 27.1 miles (43.6 km) runs from Highway 59 in Siloam Springs north into Delaware County, Oklahoma along Oklahoma State Highway 20 (SH-20) to terminate at Missouri Route 43 (Route 43) at the Missouri/Oklahoma/Arkansas tri-point near Southwest City, Missouri. A second segment of 20.0 miles (32.2 km) runs northeast from Highway 21 at Boxley to Highway 7 in Harrison. The third segment runs 1.8 miles (2.9 km) north in Harrison from US Route 65 (US 65) to Highway 7.

Route 102 is a highway in southeastern Missouri. The route starts at Route 105 near East Prairie. It travels southeastwards through farmland to Big Oak Tree State Park. The road then turns east past the entrance to the park, and ends at its eastern terminus at Route 77 in Dorena. The route was designated in 1940, as a road from the state park to a supplemental route. Route 102 replaced a large section of the supplemental route in 1961, and then was extended eastwards to a new terminus at Route 77 in 1994. 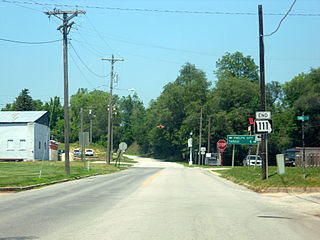 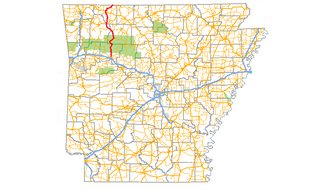 Highway 21 is a north–south state highway in north central Arkansas. The route of 99.14 miles (159.55 km) runs from US Route 64 (US 64) in Clarksville north across US 62 to Missouri Route 13 at the Missouri state line The route is entirely a two-lane route with the exception of a brief concurrency with US 62 in Berryville. 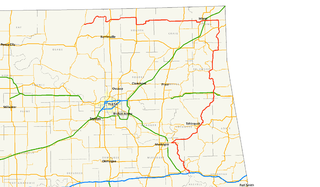 State Highway 10 is a state highway in northeastern Oklahoma. It makes a 233.1 miles (375.1 km) crescent through the northeast corner of the state, running from SH-99 in Osage County to Interstate 40 (I-40) near Gore. It has two lettered spur routes. 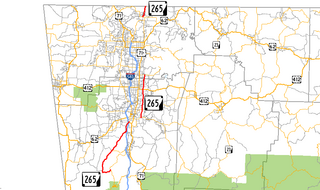