Mladost (Bulgarian : Младост, meaning "Youth") is a district [1] of Sofia. It is one of the most modern and fast developing areas in the city. As of 2012 [update] it has 114,887 inhabitants which makes it the second-most-populous district in the capital, situated in the south-east end of Sofia, between Druzhba  [ bg ] and Vitosha mountain. The largest business complex in Bulgaria is situated in the south end: Business Park Sofia. Mladost is among the safest and cleanest districts of Sofia. In May 2011 it became one of the first neighbourhoods of Sofia to have a complete cycling route of more than 8 km.

The service sector is very important. There are 11 hypermarkets (Metro, Kaufland, Billa, Praktiker, Fantastico, COMO, Technopolis, Technomarket and others); several trade centres; many office buildings, supermarkets and different automobile dealerships such as Toyota, BMW, Volvo, Opel; 3,268 trade shops. Several business centres are planned or under construction. The unemployment in the district is 4,2%, some of the lowest in the country.

The roads on the territory of the district are generally in good condition. The public transport includes bus and trolley lines as well as fixed route taxis. A great improvement to the transport system has been made, due to the Sofia Metro (Mladost 1, Mladost 3, Aleksandar Malinov, Akad. Aleksandar Teodorov - Balan and Business Park Sofia), which eases the communication with the central and western neighbourhoods of the city. There are five bus lines and two trolley line connecting the different parts of the quarter to the center of Sofia. T 5 Mladost 1 - zh.k. Nadezhda T 8 Hospital "St. Anna" - zh.k. Goce Delchev

The district has 4 polyclinics and the Metropolitan Oncology Dispensary. The most important hospital is "Sveta Anna" (Saint Anna) with around 900 beds. 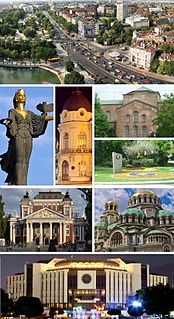 Sofia is the capital and largest city of Bulgaria. It is situated in the eponymous valley at the foot of the Vitosha mountain in the western parts of the country. The city is built west of the Iskar river, and has many mineral springs, such as the Sofia Central Mineral Baths. It has a humid continental climate. Being in the centre of the Balkans, it is midway between the Black Sea and the Adriatic Sea, and closest to the Aegean Sea. 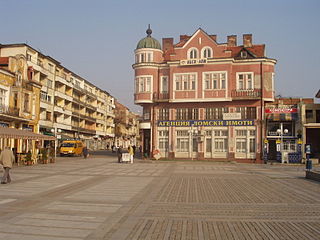 Lom is a town in northwestern Bulgaria, part of Montana Province, situated on the right bank of the Danube, close to the estuary of the Lom River. It is the administrative centre of the eponymous Lom Municipality. The town is 162 km (101 mi) north of Sofia, 56 km (35 mi) southeast of Vidin, 50 km (31 mi) north of Montana and 42 km (26 mi) west of Kozloduy. It is the second most important Bulgarian port on the Danube after Rousse. As of December 2009, the town has a population of 24,300. 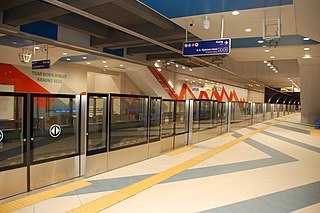 Lyulin is the largest residential complex in the capital of Bulgaria - Sofia. It is located in the western outskirts of city and is divided into 10 microdistricts. The complex has a population of 114,813 and is at the disposal of all means of public transport. 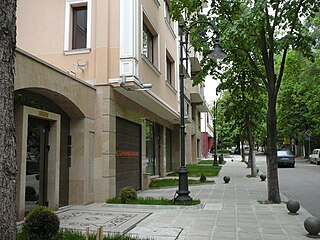 Izgrev is one of the 24 districts of Sofia. It has an area of about 4.2 km2 The population as of 2006 is 33,611. It includes three neighbourhoods: "Iztok", "Dianabad" (14,000) and "Izgrev" (3,100). There are many parks and green spaces which cover around 42% of the municipal area making it one of the environmentally friendliest urban areas in Sofia. There are 17 foreign embassies.

Triaditsa is a district located in the southern parts of Sofia. As of 2006 the population is 65,000. The district has an area of 9,8 km². It includes three neighbourhoods: "Ivan Vazov", "Strelbishte" and "Gotse Delchev".

Oborishte is an urban district located in the centre of the Bulgarian capital Sofia. As of 2006 the population is 36,000. It has an area of 3.07 km², of which streets and squares encompass 59 ha, parks and gardens 47 ha, schools and kindergartens 9 ha, hospitals and polyclinics 5 ha, embassies 1.5 ha, theatres 1 ha, petrol stations and parkings 2.5 ha, churches 1 ha, administrative buildings 16 ha and residential areas 164 ha.

Serdika or Serdica is the historical Roman name of Sofia, now the capital of Bulgaria, and is also the name of a district located in the center of the city. It includes four neighbourhoods: "Fondovi zhilishta"; "Banishora", "Orlandovtsi" and "Malashevtsi" as well as the central parts of "Draz mahala". It has an area of 17.53 km² that counts for 1,3% of the total Capital Municipality area and 8,8% of the city proper. As of 2006 Serdica has a population of 52,918. 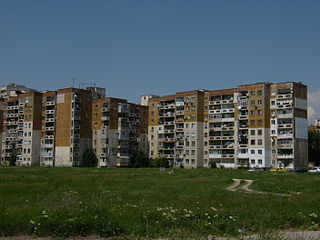 Trakiya is the largest neighbourhood of Plovdiv as well as one of the six districts of the city located in its south-eastern parts. It has 61,920 inhabitants. Its construction began in 1973, in 1976 it was inaugurated as a neighbourhoods and in 1983 it became a district. Trakiya is one of the largest area with blocks of flats in Bulgaria.

The city of Plovdiv is the second only to Bulgaria's capital Sofia in economic importance and output. It is a major industrial, commercial, financial and shopping centre.

Aleksandar Stoyanov Teodorov-Balan was a Bulgarian linguist, historian and bibliographer.

Vasil Levski Boulevard is a major boulevard in Sofia, the capital of Bulgaria. It lies between the Freight Station Square at the Slivnitsa and Danail Nikolaev Boulevards and the area of the National Palace of Culture. It is named after Bulgaria's national hero Vasil Levski. 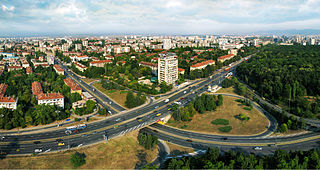 Mladost 1 Metro Station is a station on the Sofia Metro in Bulgaria. It opened on May 8, 2009. The station is served by M1 and M4 lines. M1 line continues towards Business Park, while M4 line continues to Sofia Airport.

Business Park Sofia Metro Station is a station on the Sofia Metro in Bulgaria. It started operation on 8 May 2015.

Akademik Aleksandar Teodorov - Balan Metro Station is a station on the Sofia Metro in Bulgaria. It started operation on 8 May 2015.