Pozzi was born in Genoa, Liguria, Italy, the daughter of Alfredo Pozzi, a nuclear engineer, and Rosanna, a housewife. Her name, Moana, is a Polynesian name meaning "ocean". [1] In her youth, Pozzi lived for periods of time in Canada and Brazil, due to the nature of her father's work requiring him to travel. By the time she was thirteen years old, the family had returned to their native Italy, where she finished school. In 1979, a few weeks before her 18th birthday, she gave birth to her only child, a son named Simone, who was raised by her parents and told that his mother was his older sister. The family moved to France in 1980 and Pozzi, then 19 years old, decided to stay in Rome.

In Rome, Pozzi started working as a model and studied acting. Sometimes she performed in television advertisements or as a walk-on in comedy movies. [2] In 1981, she performed in her first hardcore movie, Valentina, ragazza in calore (Valentina, Girl in Heat), credited as Linda Heveret. A minor scandal ensued since, at the same time the movie was in theatres, she was still working on a children's television programme, Tip Tap Club , on Rete 2. She denied being the same person, but was suspended from television anyway. [3] This gave Pozzi her first popularity in newspapers and magazines. [ citation needed ] In 1985, Federico Fellini wanted her to perform in his movie Ginger and Fred . [4]

In 1991, Pozzi published her first book Moana's Philosophy where she listed, with marks from 4 to 9.5, twenty famous celebrities who had been her lovers. The list included actors such as Robert De Niro, Harvey Keitel, Roberto Benigni and Massimo Troisi, soccer players like Paulo Roberto Falcão and Marco Tardelli, writers including Luciano De Crescenzo. [ citation needed ] The name of the most famous one, the prime minister Bettino Craxi, who was her lover in 1981, was hidden as "the politician". [ citation needed ]

In 1992, Pozzi co-founded, with Hungarian Ilona Staller "Cicciolina", the Love Party of Italy, whose political program included legalization of brothels, better sex education and the creation of "love parks". [5] She ran for the mayor of Rome and received about 1 per cent of votes. [6] No one was elected, but her popularity reached its pinnacle and the various Italian TV anchors wanted to interview her. [ citation needed ] Stylist Karl Lagerfeld wanted her on the catwalk in 1993. Pozzi became so popular that she was a protagonist for an animated cartoon created by the Italian cartoonist Mario Verger, with herself co-directing. [ citation needed ] This film, entitled Moanaland (1994), aired frequently on Italian television in Blob  [ it ], and in broadcasts dedicated to the actress. [ citation needed ] Again Verger, by himself, dedicated to Pozzi another cartoon, I Remember Moana , 1995, that gained praise by film critics Marco Giusti and Enrico Ghezzi, and was transmitted in Fuori Orario . [ citation needed ] It also won a Special Mention at the Erotic Film Festival in the US. [ citation needed ]

In 1994, Pozzi fell ill, unable to eat without vomiting, and losing weight. She took time off from work to travel with her husband Antonio Di Ciesco to India and then to France. She died in Lyon, France on 15 September 1994, at the age of 33, reportedly of liver cancer. [8] The cause of her death has been a subject of debate, with numerous suggestions being made, ranging from Pozzi being a spy for the KGB, killed by exposure to radioactive polonium, to dying from the result of assisted suicide orchestrated by her husband. [9] [10] Some people have questioned whether or not Pozzi died, and believe she may have faked her death to escape fame. [11] In 2006, over a decade after her death, the Italian crime show Chi l'ha visto? aired her death certificate which showed she had indeed died of liver cancer, along with her cremation certificate, showing her ashes had been given to family members. [12] Despite the release of paperwork and interviews with family members, the public and media has continued to speculate on how or if Pozzi died. [13]

In 2006, Simone Pozzi revealed to the public that he was her son, not her brother as he had been raised to believe. [14] As told by him, he was born in 1979, just a few weeks before his mother's 18th birthday, and was told growing up that his grandparents were his parents and that his mother was his older sister, to avoid the scandal of an out-of-wedlock birth in the family. Pozzi's mother confirmed the claims. Later that year, he, along with investigative journalist Francesca Parravicini, published a book about Pozzi's personality, career and relationships titled Moana, tutta la verità (English: Moana, the Whole Truth). [15]

Pozzi was a popular and beloved figure in Italy and made a name for herself outside of the pornography industry. Following her death, The New Yorker remarked on the country being in mourning as the result of her passing and the Archbishop of Naples gave a homily in her honor. [16] During her lifetime, Pozzi supported LGBT rights, denounced the Mafia, and campaigned for legalization of sex work. [17] Upon her death, she left much of her fortune to cancer research. [7] Since she remains a well-known figure in Italy, the Walt Disney Company made the decision to release the animated film Moana as Oceania in Italy and changed the title character's name to Vaiana for that localization. [18] [19]

Pozzi inspired the main character of the 1999 film Guardami (Look at Me).

In 2009 a miniseries based on her life was directed by Alfredo Peyretti and starred Violante Placido in the title role.

In 2010 her former manager Riccardo Schicchi produced and directed I Segreti di Moana (The Secrets of Moana), in which the title role was played by Vittoria Risi. [20]

Riccardo Schicchi was an Italian pornographer.

Ileana Carusio, best known with the stage names of Ramba, Malù or Malù Ramba is a retired Italian pornographic actress whose career spanned over 6 years. At first her name was "Malù", but the most fitting Ramba was launched by a journalist as he was referring to her aggressive look with guns and magazines. She has appeared in many films.

Milly D'Abbraccio is an Italian actress and pornographic actress. 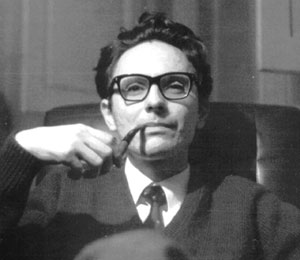 Giorgio Antonucci was an Italian physician, known for his questioning of the basis of psychiatry. 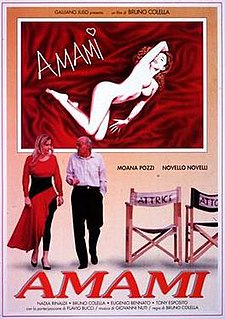 Amami is a 1993 Italian comedy film directed by Bruno Colella.

Massimo Carlotto is an Italian writer and playwright.

Mark Shannon, sometimes also billed as Mark Shanon or Mark Channon, was an Italian pornographic actor active mainly from 1979 to 1988 and cast - often as protagonist - in more than 30 Italian adult films, many of which were produced, lensed and directed by Joe D'Amato. He was the first Italian male protagonist in Italian cinema performing non-simulated sex on screen and has been called the first Italian "pornodivo". 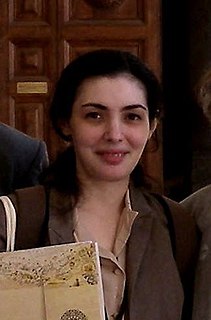 Michela Ramadori is an Italian art historian, author and academic.

Matteo Pizzigallo was an italian essayist and historian. He attended La Sapienza University in Rome and graduated in 1972.