To the north, the Tiago Macheira Subbasin contacts the Tassajara Formation, with which no groundwater exchange occurs. Groundwater flow in the subbasin is generally from southeast toward the northwest or north, corresponding to the slope of the regional terrain and water table surface. Uncontained shallow groundwater occurs within 25 feet (8 m) of the surface, while deeper confined water has levels that occur at various depths from 75 feet (20 m) to 150 feet (50 m) below the surface.

Water quality in the subbasin is generally fair with regard to sodium bicarbonate and magnesium bicarbonate, [2] However, the trend in adverse water quality due to total dissolved solids indicates unpotable conditions may exist as early as 2020 due to overpopulation of the Livermore-Amador Valley by humans and associated discharge of salts to the groundwater. [3] 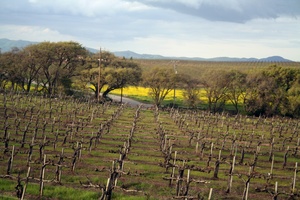 The Livermore Valley AVA is an American Viticultural Area in Alameda County, California, surrounding the city of Livermore in the Tri-Valley region. Both the AVA and the city are named after Robert Livermore, a landowner whose holdings encompassed the valley. The groundwater basin underlying the valley is the Livermore Basin, the largest sub-unit of which is the Mocho Subbasin. The Livermore Basin is one of five aquifers in the San Francisco Bay Area that supply most of the metropolitan Bay Area population. The entire Livermore Basin aquifer faces a concern over elevated total dissolved solids by the year 2020 due to an expanding human population leading to higher rates of return water flows to the aquifer containing certain salts.

The Clayton-Marsh Creek-Greenville Fault is a fault located in the eastern San Francisco Bay Area of California, in Alameda County and Contra Costa County. It is part of the somewhat parallel system of faults that are secondary to the San Andreas Fault.

Arroyo Seco is an 11.7-mile-long (18.8 km) watercourse in Alameda County, California, that traverses through the city of Livermore. Arroyo Seco means "dry stream" in Spanish. Arroyo Seco lies above the Arroyo Seco watershed, which includes the eastern part of the city of Livermore and also the Sandia National Laboratory. The Mocho Subbasin is the largest of the subbasins in the Livermore Valley watershed. This subbasin is bounded to the west by the Livermore Fault Zone and to the east by the Tesla Fault. Some groundwater flow occurs across these fault boundaries, but flows are discontinuous below a depth of 50 feet (15 m) across the Tesla Fault and south of the Arroyo Mocho channel across the Livermore Fault. A number of threatened and endangered species occur in this watershed.

The Tesla Fault can be found in the northeastern Diablo Range, California. This fault is only semi-active. 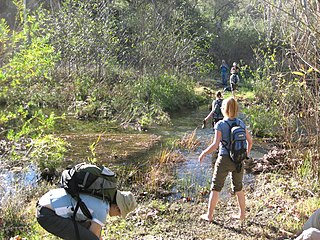 San Juan Creek, also called the San Juan River, is a 29-mile (47 km) long stream in Orange County, California, draining a watershed of 133.9 square miles (347 km2). Its mainstem begins in the southern Santa Ana Mountains in the Cleveland National Forest. It winds west and south through San Juan Canyon, and is joined by Arroyo Trabuco as it passes through San Juan Capistrano. It flows into the Pacific Ocean at Doheny State Beach. San Juan Canyon provides a major part of the route for California State Route 74.

Amador Valley is a valley in eastern Alameda County, California and is the location of the cities of Dublin and Pleasanton. The valley is bounded by the foothills of the Diablo Range on the north and south, Pleasanton Ridge to the west, and Livermore Valley to the east.

Borrego Valley Groundwater Basin, located in the very southern region of California, is one of the driest basins in the state. With climate change predicted to have strong effects into foreseeable future, the region is viewed with a skepticism in the sustainable use of water at current rates of consumption. Both natural and man-made geographic divisions within this basin allow for a closer inspection of the various management techniques implemented throughout the years, and provide a basis for what may be pursued for an uncertain future.