Kusumaatmadja was born on 17 February 1929 in Batavia, (now Jakarta). Kusumaatmadja joined the Union of Youth Students in Indonesia after independence in 1945 and fought in the Indonesian National Revolution as a member of the Student Army and the People's Security Army. After the revolution ended, Kusumaatmadja attended the Law Faculty of the University of Indonesia and pursued a double degree program from the Yale Law School. He graduated in 1955 with an undergraduate degree from the University of Indonesia and a Master of Laws degree from Yale Law School. [2] . He attended further university education at Padjadjaran University and obtained a doctorate in 1962. [3]

According to Ronald and June Katz, Kusumaatmadja's study in the United States widened his interpretation of the Indonesian law system, which was influenced by the Dutch legal system during the colonial era. One particular idea was the concept of law as a tool of social engineering by Roscoe Pound. The concept was altered by Kusumaatmadja to fit in the Indonesian legal environment and became a recurring theme in his writings. [4] However, the concept contradicted the government's view on law, and Kusumaatmadja was forced to reside overseas. [5]

Kusumaatmadja worked briefly at Bank Indonesia's Foreign Exchange Institute before becoming a lecturer at Padjadjaran University. He taught international law in the university, with a specialty in the field of the law of the sea. He also taught in other academic institutions, including the University of Indonesia and the Indonesian Army Command and General Staff College. Although he had already been made a professor by the time he obtained a doctorate, the professorship was not made official until 1966 due to the aforementioned conflict with the government. [6]

Aside from his job as a lecturer, Kusumaatmadja acted for the defense in several legal cases. Two notable cases he handled in the 1960s were the Bremen Tobacco case and the MacDonald House bombing incident. He also became the conceptor for various statutes such as the law on Indonesia's waters and the country's doctrine regarding the continental shelf. [7] The latter was produced after his tenure as the chief law-of-the-sea negotiator for Indonesia. [5]

After the end of Sukarno's rule and the beginning of Suharto's rule in Indonesia, Kusumaatmadja was tasked to reform the law education curriculum in Indonesia. The new curriculum, which was introduced in 1972, gave more degrees of freedom to law students. Kusumaatmadja himself hoped that the curriculum could produce lawyers that improve the legal system of Indonesia instead of accepting it as it is. Inside his own university, Kusumaatmadja established a research institute for the law faculty. Several works that the institute has produced was the criteria of a "minimum law library" for law schools all over Indonesia to support the newly introduced curriculum and inventorying cases from the West Java Supreme Court that would later be used for case study and legal review. [8]

Kusumaatmadja was made Minister of Justice in a reshuffle of the Second Development Cabinet on 22 January 1974. [9] One of his first actions was reviving the Institute of National Law Reform. Previously, the institute was largely dormant and had little to no operational budget. Kusumaatmadja renamed the institute, increased the amount of budget allocated from the institute, and altered the organizational structure. The re-organization, in particular, sought to bring legal academics closer to the lawmaking and law reform processes. [10]

The revival of the Institute of National Law Reform managed to bear fruit in the form of an increase in legal research, workshops, and meetings in Indonesia. A workshop to coordinate legal research was held in September 1974, while a workshop aimed to document and index legal information was held in December 1974. Another significant result was in the form of agreed-upon legal terms, which Kusumaatmadja described as important to make the legal language "uniform, usable, and understandable to the people". [11]

After serving as Minister of Justice for about four years, Kusumaatmadja was appointed Minister of Foreign Affairs in the Third Development Cabinet in 1978. He was re-appointed as Foreign Minister in the next cabinet for the period 1983-1988, thus serving a total of ten years as foreign minister. During his period in office, Kusumaatmadja promoted the concept of "archipelagic state" to describe Indonesia. The concept was later recognized by the United Nations through the United Nations Convention on the Law of the Sea in 1982. [12]

Aside from the archipelago state, one of his hallmarks as foreign minister was his support for cultural diplomacy, a concept aimed at improving Indonesia's image overseas. Nevertheless, his concept failed to emphasize proprietary issues that were rampant at that time. His focus instead was to present Indonesia as a civil country and dismiss its image as a militaristic and cronyistic country. [12] The concept was promoted in various ways, such as the First International [Gamelan]] Festival which was held in conjunction with the Expo 86 in Vancouver. [13] However, other efforts to promote this concept, such as the exhibition of the Asmat tribe art in London and a dance performance by the Mangkunegaran troupe in the same city, were less successful. The former, in particular, was criticized due to the disrespectful treatment by Indonesian academics to the Asmat culture in the exhibition. [14]

The Crescent Star Party is a political party in Indonesia. 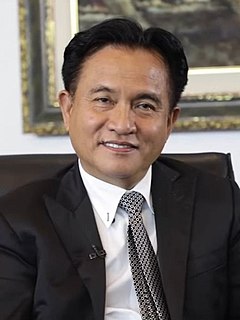 Yusril Ihza Mahendra is an Indonesian lawyer and politician. Yusril currently is the chairman of the Crescent Star Party (PBB), and had also been its chair between 1998 and 2005.

Malem Sambat Ka'ban is an Indonesian politician who served as the Forestry Minister of Indonesia from 2004 to 2009. On 1 May 2005, he was appointed as the chairman of the Crescent Star Party (PBB).

The Third Development Cabinet was the Indonesian Cabinet which served under President Suharto and Vice President Adam Malik. The Cabinet was formed after Suharto was elected to a third term as president by the People's Consultative Assembly (MPR).

Manggar is a town in the Indonesian province of Bangka-Belitung, Indonesia which is the seat of the East Belitung Regency. The town was founded as a tin mining town in the 19th century.

Baharuddin Lopa was an Indonesian Minister of Justice and Human Rights and later Attorney General of Indonesia.

Jakob Oetama was an Indonesian senior journalist and businessman who was one of the co-founders and owners of Kompas Gramedia Group, the largest media group in Indonesia. Together with P.K. Ojong in 1965 he established the Kompas daily, the leading national broadsheet newspaper in Indonesia, where he was editor-in-chief until 2000.

Umar Seno Aji (1915–1984) was the fifth Chief Justice of the Supreme Court of Indonesia as well as the fourteenth Indonesian Minister of Law and Human Rights.

Achmad Dimyati Natakusumah is an Indonesian politician who is a member of the People's Representative Council since 2019, and previously between 2009 and 2018. Natakusumah was also the regent of Pandeglang Regency between 2000 and 2009. 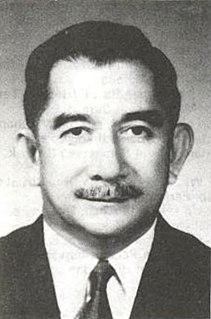 PanditaRoos Telaumbanua was an Indonesian Nias priest, politician and bureaucrat, who served as the Regent of Nias, acting Mayor of Medan, acting Governor of Sumatra, and the member of People's Representative Council.

Sadjarwo Djarwonagoro was a Javanese politician who served as the Minister of Agriculture, Minister of Agrarian Affairs, and Member of the People's Representative Council and People's Consultative Assembly. He was also the rector of the Untag in Jakarta. 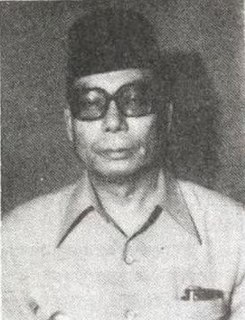 Edward Wellington Pahala "Tam" Tambunan was an Indonesian military figure and politician who became the Governor of North Sumatra from 1978 until 1983.

Agus Subekti was an Indonesian admiral who served as the first commander of the Indonesian Marine Corps and as the Vice Governor of West Irian from 1964 until 1965.

Muhammad Ali Taher Parasong was an Indonesian politician from the National Mandate Party who was the member of the People's Representative Council from the Banten III electoral district from the 2014 Indonesian legislative election until his death.

Jalaluddin Rakhmat, also known by the nickname of Kang Jalal, was an Indonesian academician and politician from the Indonesian Democratic Party of Struggle who became the member of the People's Representative Council from 2014 until 2019.

Ayatullah Saleh was an Indonesian kyai and politician who became the member of the Jakarta Regional People's Representative for fourteen years, the council's deputy speaker from 1966 until 1971, and as the member of the People's Consultative Assembly from 1972 until 1977. 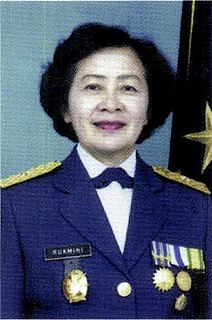 Rukmini was an Indonesian air force officer who became the member of the People's Representative Council from 1997 until 2002. She was the first female to hold a flag officer post in the Indonesian Air Force. 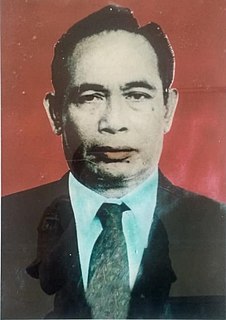 Albertus Maruli Tambunan was an Indonesian armed forces officer and politician who served as the Governor of Central Sulawesi from 1973 until 1978.