Modena Football Club 2018, commonly referred to as Modena, is an Italian football club based in Modena, Emilia-Romagna. The club was founded in 1912, and refounded in 2018, and had spent the majority of its existence playing in Serie B. It currently competes in Serie C, the third tier of Italian football.

Modena Football Club was formed in on 5 April 1912 as the result of a merging between existing Modenese clubs, Football Club Audax Modena and l' Associazione Studentesca del Calcio Modena. The new colours were to be yellow and blue. Modena's first friendly match was played on 3 November 1912 in the Piazza d'Armi against Venezia. [1] [2]

Modena first took part Italian football league in 1912–13, where they competed in the top division. These early years saw the purchase of Attilio Fresia, perhaps the greatest player in the club's history. During the period of the first world war, the team won the 1916 Coppa Federale. [3] [4]

In 1920–21, Modena lost 4–0 in the championship semi-finals to Alessandria. In the years following, there was a period of disorganization in Italian football and Modena found itself at odds with the Italian Football Federation (FIGC) and moved to the CI Comitato Calcistico Italiano along with Internazionale, Venezia, Torino, Genoa and others. In 1929–30, their first in Serie A (then a single round consisting of 18 teams), the club finished in 12th place with 30 points. [5] [6]

In 1931–32 came the club's first relegation to Serie B, where they remained until 1937. The 1936–37 season featured the inauguration of Modena's new stadium, dedicated to Cesare Marzari, a former gialloblu played killed in the war in Africa. During these years, the name was changed to Modena Calcio following directives of the regime aimed at eliminating all foreign words in the sports lexicon. In the 1937–38 season, there was a return to Serie A led by the Hungarian player/coach János Nehadoma. The following season, Modena escaped relegation by just one point. The 1939–40 campaign was the year when the numbers first appeared on the shirts of players, but at the end of the season, the yellow and blue were relegated to Serie B. [7] [8]

In 1940–41, Modena returned to Serie A despite World War II considerably reducing the workforce. The following year, they fell back to Serie B. At the end of the War, however, Modena finished third in Serie A, just behind Torino and Juventus. Following the resignation of both the president and coach in 1948–49, however, the squad was relegated back Serie B. [9] [10]

The club remained in Serie B throughout the 1950s. Tenor Luciano Pavarotti played on the team, making several appearances as a winger. [11] In 1957–58, Zenit became the sponsor of the team, providing 100 million lira for promotion to Serie A, but the team finished only in seventh place. In 1959–60, the sponsor withdrew and the team relegated for the first time to Serie C. [12] [13]

The 1960s began with Modena in Serie C. In 1960–61, with the coach Malagoli, the team was promoted to Serie B and the next year on the back of striker Enrico Pagliari (26 goals in 2 seasons) found Modena back in the top flight. The following year, thanks mainly to the Brazilian Chinesinho, Modena achieved safety in Serie A, but in 1963–64, despite the return of Sergio Brighenti (who scored goals), Modena went back to Serie B after a playoff defeat to Sampdoria played in Milan. For the remainder of the 1960s, the club played in Serie B. [14] [15]

In 1971–72, after changing three coaches, Modena again fell down to Serie C. Following consecutive seventh-place finishes in Serie C, Modena finally was promoted back to Serie B in 1974–75. In 1976–77, Modena achieved safety in Serie B only by beating Monza on the last day of the season. 1977–78 saw a corporate crisis in which the club was relegated to Serie C. In the following season, it was relegated even further down to Serie C2, its lowest point since the club was founded. [16] [17]

The beginning of the 1980s saw Modena back to Serie C1 and out of its economic crisis. Modena even won the Anglo-Italian Cup in 1981 and 1982. In 1985–86, they returned to Serie B behind the 21 goals scored by Sauro Frutti. In the following season, the club was dramatically saved from relegation on the final day, beating local rivals Bologna in the derby. But in 1987–88, Modena were again relegated to Serie C1. [18] [19]

The 1989–90 season saw Modena promoted back to Serie B, led by their manager Renzo Ulivieri and goalkeeper Marco Ballotta who allowed a record low 9 goals conceded in 34 games. In 1991–92, following the departure of Ulivieri for Vicenza, Modena was again saved from relegation on the final day, beating Messina 2–1. The rest of the decade saw the club in tumultuous financial and sporting position, as in 1993–94 the team was relegated to C1. A year later, Modena was surprisingly relegated to C2 after losing a play-out with Massese, however the club was rescued by the FIGC due to another team's penalty, ensuring Modena's status in C1. The following year, only a loss to Lumezzane in the play-offs denied the club's promotion. [20] [21]

In 2000–01, despite the death of the chairman Luigi Montagnani in the summer, the team begins a cycle of two great years: first promoted from Serie C1 to Serie B and the following year the club returned to Serie A for the first time in 38 years. Modena begin their stint back in the top flight with a humbling 0–3 defeat at the hand of Milan, but followed it up with a historic 2–1 victory against Roma at the Stadio Olimpico. The rest of the season was difficult, however, Modena secured its Serie A status on the last day of the season. The following season saw the club finish third from bottom on 30 points to be sent back to Serie B where they remained until their relegation to the third division at the end of the 2015-16 season.

On 5 November 2017, Modena was declared bankrupt after failing to pay player wages or stadium bills which brought about a player strike and a stadium lockout. [22] The club had not attended the previous three Serie C matches, including not attending the match against Santarcangelo Calcio; with a total of four matches not attended, the club were officially excluded from "Lega Pro" on 6 November. [23]

Following that, Modena Mayor Gian Carlo Muzzarelli issued a public manifestation of interest to entrepreneurs interested in reviving football in Modena by forming a new club which will take the vacancy left by the dissolution of the Canarini. Such task was then successively assigned to former club president Romano Amadei, who re-founded the club and registered it in time for the 2018–19 Serie D. [24]

Modena ended the season in first place, together with Pergolettese; this forced a one-legged playoff to be hold, which ended in a 1–2 loss for the Canarini. [25] Modena were however readmitted to Serie C in July 2019 to fill a league vacancy.

Bologna Football Club 1909, commonly referred to as Bologna, is an Italian football club based in Bologna, Emilia-Romagna. The club are nicknamed the Rossoblù due to the red-and-blue striped shirts which they wear, which are also the official colours of the city.

Reggina 1914 S.r.l., commonly referred to as Reggina, is an Italian football club based in Reggio Calabria. Founded in 1914, they currently play in Serie C, and play their home matches at the 27,763 seater Stadio Oreste Granillo. They are nicknamed the amaranto (amaranth) after their official colours. The club was formerly known as Reggina Calcio before declaring bankruptcy in 2015, as well as A.S.D. Reggio Calabria in 2015–16 season and Urbs Reggina 1914 from 2016 to 2019.

Associazioni Calcio Riunite Messina S.S.D. a r.l. is an Italian football club based in Messina, Sicily. It currently plays in Serie D.

L.R. Vicenza Virtus, commonly referred to as Vicenza, is an Italian football club based in Vicenza, Veneto. Founded in 1902 as Associazione del Calcio in Vicenza, they became Lanerossi Vicenza in 1953, then Vicenza Calcio from 1990 to 2018, a year which saw the club going bankrupt and being put under controlled administration in order to preserve the Serie C spot at the end of the 2017–18 season. Renzo Rosso, owner of Diesel, merged its Bassano Virtus and some of the assets of Vicenza Calcio into one team, which will play in Vicenza, while the two sides will preserve their distinct youth teams. Vicenza is the oldest team in Veneto; officially founded on 9 March 1902 by the then dean of Liceo Lioy, Tito Buy, and the physical education teacher of the same school, Libero Antonio Scarpa.

Ternana Calcio, commonly referred to as Ternana, is an Italian football club based in Terni, Umbria. In 2017 the club was bought by Unicusano, thus adding the name of the private university to the club. The word "Unicusano" was also added to the crest in 2017–18 season, but was removed in May 2018. 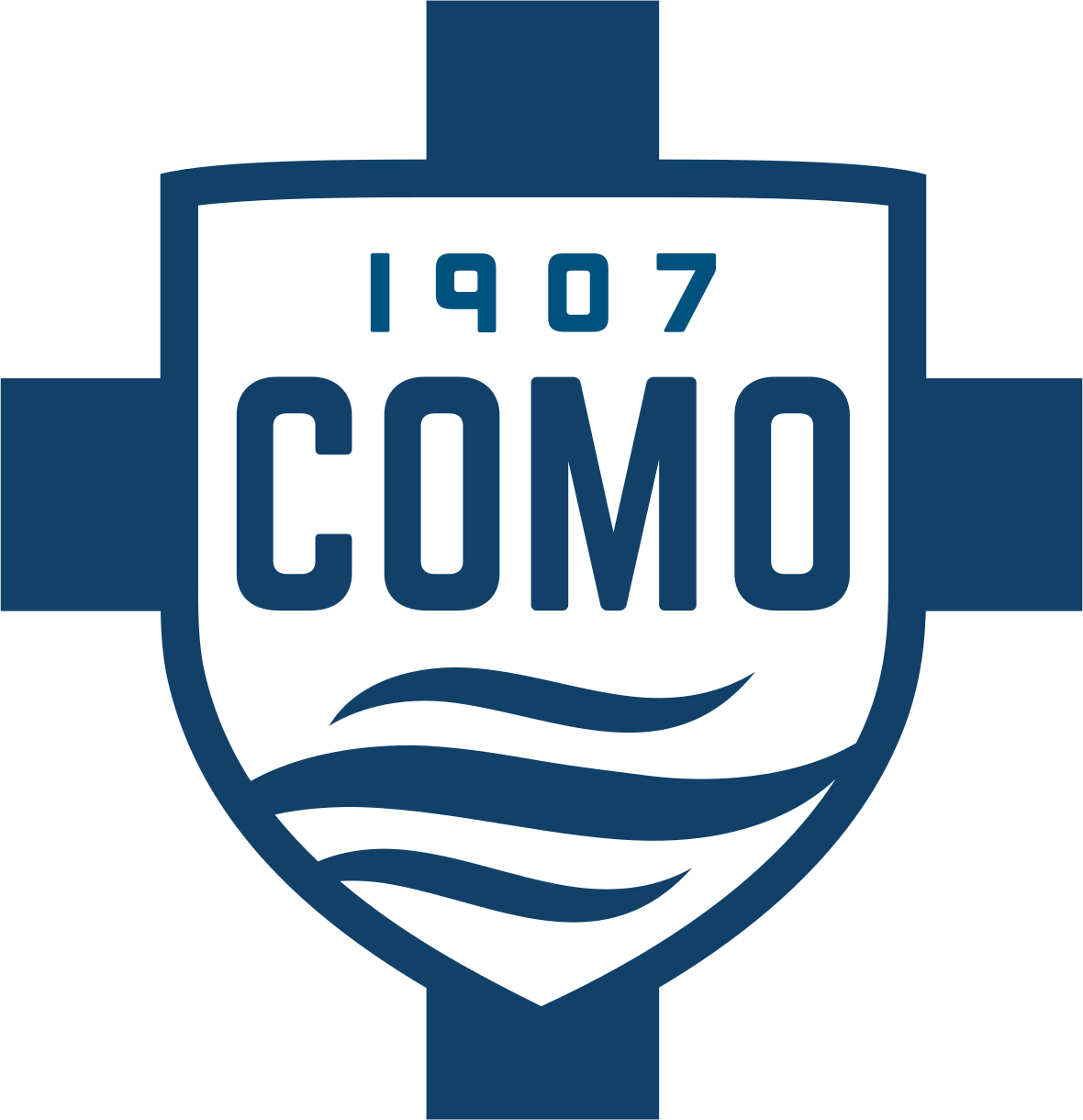 Como 1907, commonly referred to as Como, is an Italian football club based in Como, Lombardy, currently playing in Serie C. The club was founded in 1907, and the team's color is royal blue.

Unione Sportiva Sassuolo Calcio, commonly referred to as Sassuolo, is an Italian football club based in Sassuolo, Emilia-Romagna. Their colours are black and green, hence the nickname Neroverdi. 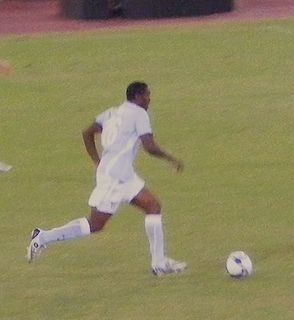 Stephen Ayodele Makinwa is a retired Nigerian footballer who played as a striker. Makinwa also played for the Nigerian national team. His name, Ayodele, means "Joy has come home".

Luigi Apolloni is an Italian football manager and former player, who played as a centre-back. At club level, Apolloni is mainly remembered for his time with Italian side Parma Calcio 1913, where he won several titles during his 13 seasons with the club. At international level, he was a member of the Italy national football team that reached the final of the 1994 FIFA World Cup.

Cristian Bucchi is an Italian football manager and former forward. He was best known for his goal-scoring ability in Serie B during the peak of his career.

Carpi Football Club 1909 is an Italian professional football club based in Carpi in the province of Modena. The club was founded in 1909 and re-founded in 2000. 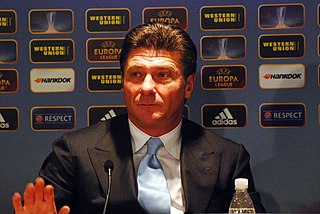 Walter Mazzarri is an Italian former footballer and head coach.

Renzo Ulivieri is an Italian association football manager. He is the current chairman of the Associazione Italiana Allenatori Calcio.

Matteo Centurioni is an Italian football coach and a former player. Centurioni played over 200 matches at Serie B. 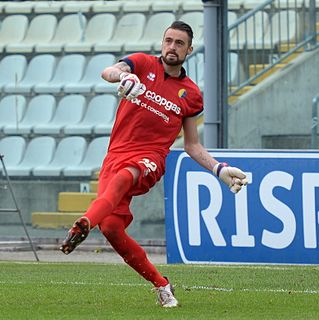 Carlo Pinsoglio is an Italian professional footballer who plays as a goalkeeper for Serie A club Juventus.

The Derby dell'Emilia, is the name given in football to any match between Bologna F.C. 1909 and Parma Calcio 1913 Emilia is a region that approximately corresponds to the western and north-eastern portions of today’s Emilia-Romagna. The region takes its name from the Via Aemilia, a Roman road in 187 BCE. It is contested twice a year when the two clubs participate in the same league competition, such as Serie A, and more often if the clubs meet in other competitions. Other matches between Emilian teams may also be referred to under the name Derby dell'Emilia. From the 2018–19 edition, with the return of Parma in Serie A three years after bankruptcy, the Derby dell'Emilia is again played.

The 2015–16 Serie B was the 84th season since its establishment in 1929. A total of 22 teams contested the league: 16 returning from the 2014–15 season, 4 promoted from Lega Pro, and 2 relegated from Serie A. Vacancies created by the bankruptcy of Serie A-relegated Parma and the demotion of Catania to Lega Pro due to match fixing allowed Brescia to remain in the league despite being relegated. Furthermore, Teramo was due to participate to Serie B but due to the allegations for match-fixing, the Courts decided to relegate Teramo in the last place of Lega Pro of the previous season. After the demotion of Catania, Virtus Entella was readmitted into Serie B as the best team of the relegated teams from the previous season. Furthermore, Ascoli was promoted into the championship after finishing second in Lega Pro Group B, second after Teramo before being stripped of the title for the match-fixing scandal.