The Moesi ( /ˈmiːsaɪ/ or /ˈmiːzaɪ/ ; Ancient Greek : Μοισοί, Moisoí or Μυσοί, Mysoí; Latin : Moesi or Moesae) were a Paleo-Balkan tribe inhabiting the region around the River Timok to the south of the Danube, [1] between present-day north-western Bulgaria and south-eastern Serbia. Strabo considered them to be of Thracian origin and related to the Mysians, who inhabited the region of Mysia in northwest Anatolia. [2] [3]

The Moesi were the eponymous people of the Roman province of Moesia, after their defeat in 29 BC. Moesia was first established as a separate province in 45–46 AD. [4] [5] The province also included other Paleo-Balkan tribes, notably Dardani, Scordisci and Triballi. [5] In the time of Pliny and Ptolemy the civitas of the Moesi was located around Ratiaria. [6]

The Moesi were recorded in ancient sources from the 1st century BC onwards. [1] Strabo mentioned the Moesi considering them to be of the same origin as the Homeric Mysi of northwest Anatolia. According to him the people that remained in their original territory in Europe were later called Moesi and were of Thracian descent. [2] [3] However the subsequent development of the Moesi and of the Mysi was completely different. In Appian's Illyrica the people living in Europe are always referred to as the Mysians. [2] The Roman province of Moesia was named after the Moesi. [5]

The ethnic name of the Balkan Μοισοί Moesi, as well as of the Anatolian Μυσοί Mysoi , seems to be based on the root Masa, from the Paleo-Balkan word for 'horse', *me(n)za-; also the ethnic name Muška seems to be a suffixal derivative holding some kind of semantic distinction from the original root. They have been connected with the Albanian word for 'mule' mushk(ë) (virtually identical to Muška/i), Romanian muşcoiu and Aromanian musca, as well as in almost all Slavic languages (cf. Old Church Slavonic мьзгъ or мьскъ, Serbo-Croatian mazak or maz(a)g, Old Czech mesh, mzha, mezek, mezk 'hinny', Old Russian москъ, мъскъ or мьскъ etc.). The root is generally considered to have originated in the Balkans and thereafter spreading into the Slavic zone. [7]

Already in the 19th century German linguist Gustav Meyer suggested a link between Μυσοί and Albanian mushk. He perceived mushk as a suffixal formation *mus-k-o-, noting the phonetic similarity between the terms. [8] Furthermore he provided the evidence of a fragment written by Anacreon mentioning the Mysians of Anatolia as 'inventors' of the interbreeding between jacks and mares. Also according to Mayer the northern parts of Anatolia might have been the homeland of the mules. A connection of Mysians with mules is also present already in Homer's Iliad . [9] Further relevant Paleo-Balkan evidence can be seen in Iuppiter Menzanas, mentioned in a passage written by Festus in relation to a Messapian horse sacrifice, and in ΜΕΖΗΝΑ̣Ι from a Thracian inscription on the Duvanli gold ring also bearing the image of a horseman. Both these attestations might indicate that *me(n)zana- means 'horseman' and consequently that the root *me(n)za- means 'horse'. The term has been further compared with Albanian mëz or mâz 'foal', which also finds a correlation with Romanian mînz. [10] [note 1]

With the formation of the Bulgarian ethnicity in the mid-10th century, [11] [12] the Byzantines usually called the Bulgarians Moesi, and their lands, Moesia. [13]

The Moesi were formed out of the 14th century BC Brnjica culture. [14] Thracologists suggest that the Moesi may have spoken a language or dialect intermediary between Dacian and Thracian.[ citation needed ] Little is known about them prior to 29 BC. [4] During the "Wars of Augustus" the Romans under Crassus chased an army of the Bastarnae and marched towards the Moesi, successfully overtaking their stronghold and subduing the majority of the tribe by 29 BC.

The large number of davae (town names end in '-dava' or '-deva') across Moesia, parts of Thrace and Dalmatia, indicates a much closer linguistic affinity between Dacian and Moesian languages, than between Moesian and Thracian, hinting to a much closer connection between Dacians and Moesians. The distinctly Thracian -para and -bria endings for town names are mostly present south of Moesia, making the Balkan Mountains (Haemus Mons) the linguistic border between Daco-Moesian and Thracian languages and cultures. [15]

The close Dacian-Moesian connection is further emphasized by the fact that significant areas of Moesia were part of Burebista's Dacian kingdom formed by creating a union of related Geto-Dacian, Moesian and Thracian tribes. Additionally, after the Roman conquest of Moesia, the Geto-Dacians constantly raided across the Danube, under kings like Duras and Diurpaneus, harassing Roman troops and attempting to regain lost territory.[ citation needed ]

From the Moesian language or dialect, only a few items are recorded; their ethnonym (Moesoi, Moesi), some toponyms and anthroponyms, and a phytonym: Mendruta, the Moesian name for the False helleborine (L. Veratrum nigrum ) or the Beet (L. Beta vulgaris ).[ citation needed ]

Moesia was an ancient region and later Roman province situated in the Balkans south of the Danube River, which included most of the territory of modern-day Central Serbia, Kosovo, the north-eastern parts of Albania and the northern parts of North Macedonia, the whole of Northern Bulgaria, Romanian Dobruja and small parts of Southern Ukraine.

The Dacians were the ancient Indo-European inhabitants of the cultural region of Dacia, located in the area near the Carpathian Mountains and west of the Black Sea. They are often considered a subgroup of the Thracians. This area includes mainly the present-day countries of Romania and Moldova, as well as parts of Ukraine, Eastern Serbia, Northern Bulgaria, Slovakia, Hungary and Southern Poland. The Dacians spoke the Dacian language, which has a debated relationships with the neighbouring Thracian language and may be a subgroup of it. Dacians were somewhat culturally influenced by the neighbouring Scythians and by the Celtic invaders of the 4th century BC.

The Scordisci were a Celtic Iron Age cultural group centered in the territory of present-day Serbia, at the confluence of the Savus (Sava), Dravus (Drava), Margus (Morava) and Danube rivers. They were historically notable from the beginning of the third century BC until the turn of the common era, and consolidated into a tribal state. At their zenith, their core territory stretched over regions comprising parts of present-day Serbia, Croatia, Bulgaria and Romania, while their influence spread even further. After the Roman conquest in the 1st century AD, their territories were included into the Roman provinces of Pannonia, Moesia and Dacia. 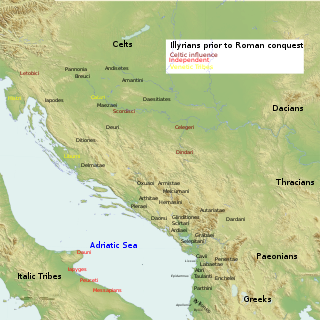 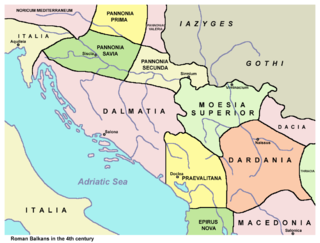 Paleo-Balkan mythology is the group of religious beliefs held by Paleo-Balkan-speaking peoples in ancient times, including Illyrian, Thracian and Dacian mythologies.

The Eneti or Enetoi were an Illyrian people dwelling inland of Illyria, in an area located to the north or north-west of Macedonia in classical antiquity. They were neighbors of the Dardani and the Triballi.