Mohamad Moin studied at the Higher Institute of Science in Tehran and obtained his BA in literature and philosophy in 1934. He subsequently went to Belgium and graduated in applied psychology, anthropology and cognitive science under Elmer Knowles. On returning to Iran he carried out his doctoral research under Ebrahim Pourdavoud at the University of Tehran, culminating in a thesis with the title "Mazdayasna and its Influence on Persian Literature" for which he received a PhD with honours in Persian literature and linguistics. He is the first doctoral graduate in Persian literature from the University of Tehran.

He was later appointed full professor at University of Tehran, from which position he was subsequently promoted as Distinguished Professor to the Chair of Literary Criticism and Research in Literary Texts at the same university. He is best known for his famous Mo'in Dictionary as well as his contributions to The Dehkhoda Dictionary , a work he did in collaboration with Ali-Akbar Dehkhoda himself.

Mo'in was President of the literature commission of the International Congress of Iranian Studies and Director of the Dehkhoda Dictionary Institute.

Mohammad Mo'in died in 1971 in Tehran. He is buried in Astaneh Ashrafiyeh, Gilan, Iran. His burial chamber was vandalized in 1981 by vigilantes, thought to be due to Mo'in's ties to the political elite of the Pahlavi Era.

University of Tehran is the oldest modern university located in Tehran, Iran. It is also one of the most prestigious universities in the Middle East. Based on its historical, socio-cultural, and political pedigree, as well as its research and teaching profile, UT has been nicknamed "The Mother University of Iran". It has been ranked as one of the best universities in the Middle East in national and international rankings and among the top universities in the world. It is also the premier knowledge producing institute among all OIC countries. The university offers 111 bachelor's degree programs, 177 master's degree programs, and 156 Ph.D. programs. Many of the departments were absorbed into the University of Tehran from the Dar al-Funun established in 1851 and the Tehran School of Political Sciences established in 1899. 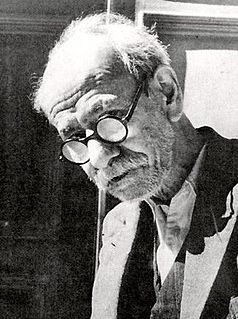 Allameh Ali Akbar Dehkhodā was a prominent Iranian linguist. He was also the author of Dehkhoda dictionary, the most extensive dictionary of the Persian language published to date.

Persian literature comprises oral compositions and written texts in the Persian language and is one of the world's oldest literatures. It spans over two-and-a-half millennia. Its sources have been within Greater Iran including present-day Iran, Iraq, Afghanistan, the Caucasus, and Turkey, regions of Central Asia and South Asia where the Persian language has historically been either the native or official language. For example, Rumi, one of the best-loved Persian poets, born in Balkh or Wakhsh, wrote in Persian and lived in Konya, at that time the capital of the Seljuks in Anatolia. The Ghaznavids conquered large territories in Central and South Asia and adopted Persian as their court language. There is thus Persian literature from Iran, Mesopotamia, Azerbaijan, the wider Caucasus, Turkey, Pakistan, Bangladesh, India, Tajikistan and other parts of Central Asia. Not all Persian literature is written in Persian, as some consider works written by ethnic Persians or Iranians in other languages, such as Greek and Arabic, to be included. At the same time, not all literature written in Persian is written by ethnic Persians or Iranians, as Turkic, Caucasian, and Indic poets and writers have also used the Persian language in the environment of Persianate cultures.

Mohammad-Taqi Bahar, widely known as Malek osh-Sho'arā and Malek osh-Sho'arā Bahār, was a renowned Iranian poet, scholar, politician, journalist, historian and Professor of Literature. Although he was a 20th-century poet, his poems are fairly traditional and strongly nationalistic in character.

Mostafa Moeen is an Iranian politician, professor of pediatrics, and a human rights activist who is currently founder and president of Center for Human Rights and Democracy in Iran. He was a presidential candidate for the 2005 Iranian presidential election. His campaign enjoyed the support of some reformist parties and organizations, headed by the Islamic Iran Participation Front (IIPF). 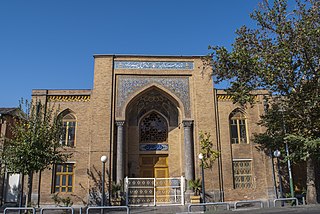 The Dehkhoda Dictionary is the largest comprehensive Persian dictionary ever published, comprising 200 volumes. It is published by the Tehran University Press (UTP) under the supervision of the Dehkhoda Dictionary Institute. It was first published in 1931. It traces the historical development of the Persian language, providing a comprehensive resource to scholars and academic researchers, as well as describing usage in its many variations throughout the world.

Badiozzaman Forouzanfar or Badi'ozzamān Forūzānfar was a scholar of Persian literature, Iranian linguistics and culture, and an expert on Rumi and his works. He was a distinguished professor of literature at Tehran University.

The Tehran School of Political Science, is one of the first modern institutions of higher education in Iran at the turn of the twentieth century. Most of the nation's political elite graduated from the school.

The Dehkhoda Dictionary Institute or International Center for Persian Studies: ICPS is the main official international center for teaching the Persian language and literature in Iran. It was founded in 1945 and is now part of the University of Tehran. It is named after Mirza Ali Akbar Ghazvini, known as Dehkhoda, a prominent Iranian literary scholar, poet, and author.

Mohsen Hashtroodi was an Iranian mathematician. His father, Shaikh Esmāeel Mojtahed was an advisor to Shaikh Mohammad Khiābāni, who played a significant role in the establishment of the parliamentary democracy in Iran during and after the Iranian Constitutional Revolution.

Mohammad Reza Bateni is a prominent Iranian linguist and scholar. He was born in 1934 in Isfahan, Iran. He graduated as bachelor in English language and literature from Daneshsara-ye Aali in Tehran. He obtained his Master and Doctoral degrees, in linguistics, from University of Leeds and University College London, respectively. Bateni has also formerly worked at MIT and University of California, Berkeley, as a researcher and professor. He is currently retired from Tehran University.

Mohammad Jafar Yahaghi is a celebrated Persian writer, literary critic, editor and translator and distinguished professor of literature at Ferdowsi University of Mashad. He is currently the head of Center of Excellence in Researches about Ferdowsi and Khorasan literature.

Mohammad-Amin Riahi was a prominent Iranian literary scholar of Persian literature, a historian, writer and statesman. Apart from being one of the authors of Dehkhoda Dictionary and Encyclopædia Iranica, he was the author and editor of several well-known scholarly books. Mohammad-Amin Riahi received his PHD on Persian literature from Tehran University under the supervision of Badiozzaman Forouzanfar. Riahi is best known for his scholarly works on Shahnameh and Ferdowsi, Hafiz, and the ancient iranian languages. He has produced critical editions of some of the major classical Persian texts such as Mersad-al-ebad and Nozhat-al-majalis. During a course of 60 years he published numerous scholarly articles, a selection of which are gathered in a volume titled Forty essays on language, literature and history of Iran.

Kayvan is a Persian masculine given name meaning Saturn. It is related to the word for Saturn in several old languages, including "Kaimanu" in Sumerian, "Kayamanu" in Akkadian, "Kion" in Syriac, and "Kewan" (kywʾn') in Middle Persian. That a 16th-century high priest of Estakhr was named Azar Kayvan suggests that "Kayvan" was used as a name for a person in Iran as early as that time, particularly among followers of Zoroastrianism. To date "Kayvan" is a popular name among families following Zoroastrianism. "Kayvan" is distinct from the similar Persian word "Kayhan", meaning "universe", also used as a masculine given name. To English speakers, the spelling Kayvon is closest to the Persian pronunciation, [keivɒːn].