In the anthropological study of kinship, a moiety ( /ˈmɔɪəti/ ) is a descent group that coexists with only one other descent group within a society. In such cases, the community usually has unilineal descent, either patri- or matri- lineal so that any individual belongs to one of the two moiety groups by birth, and all marriages take place between members of opposite moieties. It is an exogamous clan system with only two clans.[ dubious – discuss ]

A society is a group of individuals involved in persistent social interaction, or a large social group sharing the same geographical or social territory, typically subject to the same political authority and dominant cultural expectations. Societies are characterized by patterns of relationships between individuals who share a distinctive culture and institutions; a given society may be described as the sum total of such relationships among its constituent of members. In the social sciences, a larger society often exhibits stratification or dominance patterns in subgroups.

In the case of a patrilineal descent system, this can be interpreted as a system in which women are exchanged between the two moieties. Moiety societies are found particularly among the indigenous peoples of North America and Australia. [1] [2] [3]

Indigenous peoples, also known as first peoples, aboriginal peoples or native peoples, are ethnic groups who are the original settlers of a given region, in contrast to groups that have settled, occupied or colonized the area more recently. Groups are usually described as indigenous when they maintain traditions or other aspects of an early culture that is associated with a given region. Not all indigenous peoples share this characteristic, as many have adopted substantial elements of a colonizing culture, such as dress, religion or language. Indigenous peoples may be settled in a given region (sedentary) or exhibit a nomadic lifestyle across a large territory, but they are generally historically associated with a specific territory on which they depend. Indigenous societies are found in every inhabited climate zone and continent of the world. 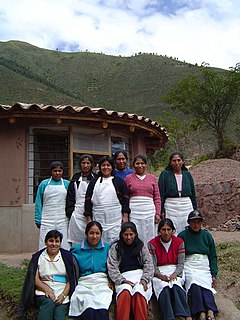 Moiety may refer to: 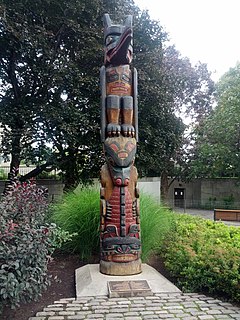 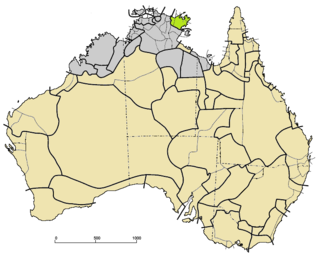 The Yolngu or Yolŋu are an aggregation of indigenous Australian people inhabiting north-eastern Arnhem Land in the Northern Territory of Australia. Yolngu means "person" in the Yolŋu languages. The terms Murngin and Wulamba were formerly used by some anthropologists for the Yolngu. All Yolngu clans are affiliated with either the Dhuwa (Dua) or the Yirritja moiety.

There are several hundred Indigenous peoples of Australia; many are groupings that existed before the British colonisation of Australia in 1788. Within each country, people lived in clan groups: extended families defined by various forms of Australian Aboriginal kinship. Inter-clan contact was common, as was inter-country contact, but there were strict protocols around this contact.

An overview of Australian Aboriginal kinship groupings within Western Australia, 1979. Tribal Boundaries map based on Norman Tindales 1974 map. It was published in Western Australia: An Atlas of Human Endeavour by the State Government, given to every school aged child in Western Australia, in commemoration of the 150th anniversary of the settlement of the Swan River Colony by a small English military force and several hundred free colonists in 1829.

The Karieri people were an Indigenous Australian people of the Pilbara, who once lived around the coastal and inland area around and east of Port Hedland.

The Nunggubuyu are an indigenous Australian people of eastern Arnhem Land in the Northern Territory.

The Tjial were an indigenous Australian people of the Northern Territory who are now extinct.

The Bingongina or Pinkangarna are a possible indigenous Australian people of the Northern Territory. However, the name may simply be a former alternative term for Mudburra.