Moimenta's history is fairly recent: Alfonso III of Asturias conquered Lamego from the Moors, when the first settlements along the Douro began by remnants of Visigothic tribes. [4] "And there they entered into power, becoming absolute masters of everything that the force of arms would take", from the writings of the Scribe Santa Rosa Viterbo. [4]

These bands created rural villages and homes that received in their local dialects the names Leomil, Baldos, Alvite, Toitam, Mileu, Segões, Sever and Ariz. [4] The inhabitants of the mountains and castros, such as Pêra, Caria and São Félix, began to descend into the valleys, abandoning the rudimentary and fragile fortifications to work in the towns for the signeurial masters. [4]

During this epoch, one of these lands (actually insignificant), whose name was implied to the localities ceremonial and funerary importance; it served as a place of homage and worship of the dead, and its name Moimenta (English: monument) was in reference to its mausoleum in honour of the dead. [4]

By the 12th century all the civil parishes that now exist were already part of the Moimenta administration, although Leomil (Couto) and Caria (Honra) had their own magistrate until 1258. [4]

One hundred years later, in the 14th century, the lands of the municipality of Moimenta da Beira, had three ecclesiastical parishes: Santa Maria de Caria, Santa Maria de Lobozaim and São Tiago de Leomil. Sever and Alvite were part of the Couto de São João de Tarouca (a military administration) created in 1140, while Vilar was part of the Honra de Fonte Arcada (an honorific title bestowed to nobility). [4] After the 14th century, as the management of rural territories necessitated an administrative authority, eight municipalities were established in the region, which extended into the 19th century: Paçô; Nagosa e Castelo; Sever e Alvite; Pêra e Peravelha; Ariz e Peva; and Moimenta (then known as Moimenta de São João Baptista de Leomil), were formed at the expense of Leomil. Meanwhile, the parishes of Paradinha, Cabaços e Baldos, were separated from Leomil (resulting in this municipality only retaining the parishes of Sarzedo and Paraduça). [4] Finally, the municipality of Caria, already a municipal seat with pillory in the Vila da Rua, included the small parishes of Arcozelos, Aldeia de Nacomba, Faia, Penso, Carregal, Lamosa, Quintela da Lapa and Segões. [4]

On 21 May 1896, Caria and Rua were transferred from Sernancelhe to Moimenta da Beira. In the short span of 21 yeast, the small municipality of Moimenta, which included only Moimenta, Paradinha, Cabaços and Baldos, in 1834, grew to 19 by 1855. [4] It was only in 1896 when the geographic limits were finally settled.

The municipality is bounded by Tabuaço the northeast, Sernancelhe in the southeast, Sátão in the south, Vila Nova de Paiva in the west and Tarouca and Armamar in the northwest.

Administratively, the municipality is divided into 16 civil parishes ( freguesias ): [5]

Paradinha is a former civil parish in the municipality (concelho) of Moimenta da Beira, Portugal. In 2013, the parish merged into the new parish Paradinha e Nagosa. The population in 2011 was 125, in an area of 5.72 km².

Vilar may refer to:

Pêra Velha is a former civil parish in the municipality (concelho) of Moimenta da Beira, Portugal. In 2013, the parish merged into the new parish Pêra Velha, Aldeia de Nacomba e Ariz. The population in 2011 was 214, in an area of 15.73 km2. 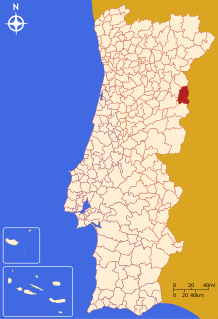 Almeida is a fortified village and a municipality in the sub-region of Beira Interior Norte and the District of Guarda, Portugal. The town proper has a population of 1,300 people (2011). The municipality population in 2011 was 7,242, in an area of 517.98 square kilometres. It is located in Riba-Côa river valley. The present Mayor is António Baptista Ribeiro, elected by the Social Democratic Party. The municipal holiday is July 2.

The Castle of Vilar Maior is a well-preserved medieval castle located in the civil parish of Aldeia da Ribeira, Vilar Maior e Badamalos, in the municipality of Sabugal, Portuguese Guarda.