Mokgweetsi Masisi is the son of Edison Masisi (1923–2003), the long-time MP for Moshupa and many-time cabinet member. [6] The younger Masisi grew up in Gaborone, attending Thornhill Primary School and Maru A Pula School. [6] One of his three brothers, Tshelang, was the MP for Francistown West for many years, while another is a retired army general. He also has a sister, Phadi. [6]

In school, Masisi competed in soccer and tennis, [6] but ultimately found acting to be his calling. In 1984, he won acclaim for his portrayal of the lead role in a Gaborone production of Cry the Beloved Country. [7] He has taken part in several South African films. [1]

In 1989, he went to Florida State University to obtain a Master's degree in social sciences education, after Masisi met some FSU faculty members working in Botswana for the Junior Secondary Education Improvement Project. [8] Following graduation, he was employed by UNICEF in Botswana. [9]

President Khama appointed Masisi as the Chancellor of the University of Botswana on July 5, 2017. The appointment, which was in consonance with Section 7 of the University of Botswana Act of 2008, was for a period of five years. It followed the death of former President Quett Masire, who served as the Chancellor until he died on June 22, 2017. [13]

On April 1, 2018, he was sworn in as the 5th President of Botswana. [1] After he ascended to the presidency, Khama left the ruling Botswana Democratic Party (BDP) to found the Botswana Patriotic Front (BPF). Khama criticized Masisi for lifting the ban on elephant hunting and called his decision to appoint Masisi as his successor a "mistake". [14]

On October 13, 2018, Masisi received an honorary doctorate from the University of Botswana. Some commentators have criticized this decision, and claimed that the correct process was not followed. [15]

In October 2019, Masisi was re-elected as Botswana's president after the BDP faced the biggest threat to its unity in more than five decades, following Khama's move to the opposition and accusing Masisi of authoritarianism. [16] In the 2019 Botswana general election, Masisi received a 52.65% majority of the vote and received a majority of seats in the National Assembly. The Botswana 2019 Elections were highly contested for, and the main opposition, the Umbrella for Democratic Change lodged a litany of court challenges alleging irregularities and electoral fraud. [17]

Amongst his election pledges, he proposed lifting the ban on elephant hunting and decriminalising homosexuality. [18]

The COVID-19 pandemic occurred during Masisi's time in office. The President responded to the pandemic by declaring a state of emergency on March 11, 2020. [19] After the declaration, emergency powers allowed Masisi to rule by decree for a period of 18 months to September 2021, despite protests from some opposition parties. [20] In December, Botswana found evidence of a new strain, leading to a curfew being enforced from December 24, 2020 to January 3, 2021. [21]

Masisi has been accused by some of having authoritarian views, and contributing to undermining democracy in Botswana. [22] Khama said that Masisi "stifled dissent". In an interview with the Financial Times , and that Botswana's reputation was being undermined locally and internationally, and that democracy was in decline. [23]

Masisi is in support of elephant hunting in Botswana, and believes that allowing some ivory trading would allow more funding for conservation. In 2019, he presented stools made from elephant feet to the national leaders of Namibia, Zambia and Zimbabwe, a move that received some criticism from international media outlets. [24] [25] [26] Masisi reversed the ban on elephant hunting put in place by his predecessor, and removed Botswana's "Shoot to Kill" anti-poaching policy. [27]

In 2021, the Chinese Embassy to the United Kingdom indicated that Masisi supported the One China policy. [28] [29]

In 2002 Masisi married Neo Maswabi, an accountant who later worked for the United Nations in New York and in Addis Ababa. They have a daughter. [30]

Masisi is colloquially referred to as "Sisiboy" among the population, a play of words on his family name. [31] 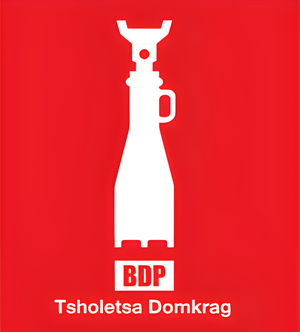 The Botswana Democratic Party is the governing party in Botswana. Its chairman is the Vice-President of Botswana, Slumber Tsogwane, and its symbol is a lift jack. The party has ruled Botswana continuously since gaining independence from the United Kingdom in 1966. Despite being classified as a paternalistic conservative party, the BDP is a consultative member of the Socialist International since 2014, which is a group including many worldwide social-democratic parties.

Moshupa is a large village in the Southern District of Botswana with a population of 20016 per the 2011 census. The people of Moshupa are called the Bakgatla-ba-ga Mmanaana, a group also found in Thamaga. Along with the related Bakgatla-ba-ga Kgafela of Mochudi, they arrived to the region from the Transvaal region in South Africa throughout the eighteenth century.

Mompati Sebogodi Merafhe was a Botswana politician who was Vice-President of Botswana from 2008 to 2012. He was a retired Lieutenant-General and served as Minister of Foreign Affairs from 1994 to 2008.

Edison Setlhomo K. Masisi was a politician and diplomat in Botswana and he is the father of the current President of Botswana, Mokgweetsi Masisi. He served as member of parliament of Mosopa between 1965 and 1999. Masisi attended Tiger Kloof along with future president Quett Masire. After qualifying as a teacher, he taught at Moshupa (1950-1964), which he served as head teacher (1957-1964). In 1964, he resigned to contest the Moshupa seat on the BDP ticket. The following year, he won in the election and was appointed as assistant Minister of Education, Labour and Social Services. He served as the second minister of state for Foreign Affairs in the Office of the President from 1969–1971. He was moved to the Ministry of Education in 1972 and later or Ministry of Health (1978-1979). In 1989, he was elected as the deputy speaker of the National Assembly, where remained in the position until 1999. In 1993, he was appointed as assistant Minister of Finance and Development Planning. He retired from active politics in 1999. 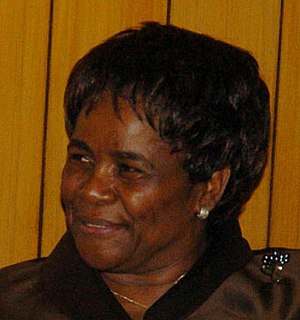 Pelonomi Venson-Moitoi is a Motswana journalist and politician who served as Minister of Foreign Affairs of Botswana from 2014 until December 2018. She was appointed to the National Assembly of Botswana in 1999 as one of the four specially selected members and was re-elected in the 2004 general elections. 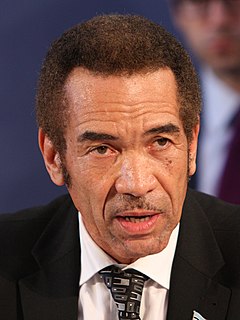 General elections were held in Botswana on 16 October 2009, alongside local elections, with early voting in 26 polling stations abroad taking place 3 October. The result was a tenth successive victory for the Botswana Democratic Party, which won 45 of the 57 elected seats in the National Assembly.

Tshekedi Stanford Khama is a Botswana politician. He is currently Member of Parliament for Serowe West, representing the Botswana Patriotic Front. 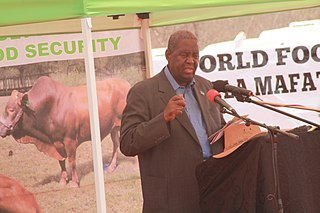 Ponatshego Honorius Kefaeng Kedikilwe is a Botswana politician who was Vice-President of Botswana from 2012 to 2014. A member of the ruling Botswana Democratic Party (BDP), he has also served as Minister of Minerals, Energy, and Water Resources since 2007.

Margaret Nnananyana Nasha is a Botswana politician who served as the Speaker of the National Assembly from 2009 to 2014. She was the first woman to hold the position.

Gladys Kokorwe is a Botswana politician who was the Speaker of the National Assembly from 2014 to 2019. She is a member of the Botswana Democratic Party (BDP).

Adv. Duma Gideon Boko is a Motswana politician. He is a lawyer and jurist. He is the president of the main opposition party in Botswana.

Slumber Tsogwane is the current Vice President of Botswana. He took office on 4 April 2018, succeeding Mokgweetsi Masisi. He is a member of the Botswana Democratic Party. 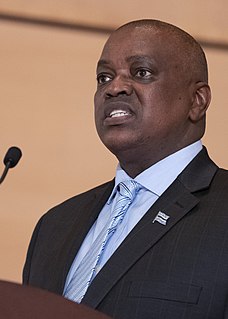 General elections were held in Botswana on 23 October 2019 to elect MPs and local government councillors. Despite a high profile split from the ruling Botswana Democratic Party (BDP) in May 2019 when former President Ian Khama left the party and switched his support to the new Botswana Patriotic Front, the BDP's vote share increased to almost 53% as the party won 38 of the 57 elected seats in the National Assembly, a gain of one compared to the 2014 elections. The elections were a twelfth straight victory for the BDP. 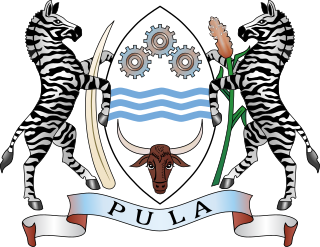 The Botswana Patriotic Front (BPF) is a populist political party in Botswana.

Thapelo Matsheka is a Motswana politician and economist who has been serving as the Minister of Finance and Economic Development since November 2019. He was elected as the Member of the National Assembly for Lobatse in October 2019. He is a member of the Botswana Democratic Party. Matsheka is the former Managing Director of Fiducia Services.

Anna Maria Mokgethi is a Motswana politician serving as the Minister of Nationality, Immigration and Gender Affairs since November 2019. She is the Member of Parliament for Gaborone Bonnington North. Mokgethi is a member of the Botswana Democratic Party.