The region is split into two provinces, named after their respective capitals Campobasso and Isernia. Campobasso also serves as the regional capital.

Molise is bordered by Abruzzo to the north, Apulia to the east, Lazio to the west, and Campania to the south. It has 35 kilometres (22 miles) of sandy coastline to the northeast, lying on the Adriatic Sea looking out towards the Tremiti islands. The countryside of Molise is mostly mountainous, with 55% covered by mountains and most of the rest by hills that go down to the sea.

Agriculture, involving small and micro holdings, is currently offering high-quality products. The agricultural holdings produce wine, cereals, olive oil, vegetables, fruits and dairy products. Traditional products are Grass Pea (cicerchia) and Farro. Molise's autochthonous grape is Tintilia which has been rediscovered during the last ten years, and many other PDO (DOP) wines, both red and white.

Though there is a large Fiat plant (Termoli), the industrial sector is dominated by the farming industry with small and medium-sized farms spread widely throughout the region. Another important industry is food processing: pasta, meat, milk products, oil and wine are the traditional products of the region. In the services sector the most important industries are distribution, hotels and catering, followed by transport and communications, banking and insurance. With few exceptions, in all sectors firms are small, and this explains the difficulties encountered when marketing products on a national scale. [8]

International tourism is growing largely as a result of the recent opening of international flights from other European countries to Pescara Airport, which is not far to the north in Abruzzo and connected to Molise by the A14 highway (the only highway passing through Molise, by Termoli).

The density of the population in Molise is well below the national average. In 2008, Molise registered 72.3 inhabitants per km2, compared to a national figure of 198.8. The region is subdivided into two provinces: Campobasso and Isernia, which together cover 1.5% of Italy's territory and less than 1% of its population. The larger province in terms of area is Campobasso at 2,909 km2, while the smaller is Isernia at 1,529 km2. The province of Campobasso is the more densely populated of the two provinces, with 79.4 inhabitants per km2, whereas Isernia registers 58.9 inhabitants per km2. [10] At the end of 2008 the most populous towns were Campobasso (51,247 inhabitants), Termoli (32,420) and Isernia (21,811).

In the period 1951–71, large-scale emigration to other countries of the European Union, to other parts of Italy and overseas led to a significant decline in the population of Molise. Negative net migration persisted until 1981. Large-scale emigration has caused many of the smaller towns and villages to lose over 60% of their population, while only a small number of larger towns have recorded significant gains. From 1982 to 1994, net migration has been positive, then followed by a negative trend until 2001. Between 1991 (330,900 inhabitants) and 2001 (320,601 inhabitants), the population of the region decreased by 3.1%; [10] since 2001 the population remained stable.

The region is home to two main ethnic minorities: the Molisan Croats (20,000 people who speak an old Dalmatian dialect of Croatian alongside Italian), and those who speak the "arbereshe" dialect of Albanian in five towns of "basso Molise" in the province of Campobasso. Molise has much tradition from the religious to the pagans, many museum, archeological sites, musical and food events.

The cuisine of Molise is similar to the cuisine of Abruzzo, though there are some differences in the dishes and ingredients. The flavors of Molise are dominated by the many aromatic herbs that grow there. Some of the characteristic foods include spicy salami, a variety of locally produced cheeses, dishes using lamb or goat, pasta dishes with hearty sauces, and vegetables that grow in the region.

In addition to bruschetta, a typical antipasto will consist of any of several meat dishes, such as the sausages capocollo, the fennel-seasoned salsiccie al finocchio, soppressata, ventricina, frascateglie or sanguinaccio. In addition to these sausages, a variety of ham is available, such as smoked prosciutto. Frequently, the sausages are enjoyed with polenta.

Main dishes of the region include:

Typical vegetable dishes may include:

Fish dishes include red mullet soup, and spaghetti with cuttlefish. Trout from the Biferno river is notable for its flavor, and is cooked with a simple but tasty sauce of aromatic herbs. Zuppa di pesce, a fish stew, is a specialty of Termoli.

Sweets and desserts have an ancient tradition here and are linked to the history of the territory and to religious and family festivities. Most common are:

Molise is twinned with:

Abruzzo is a region of Southern Italy with an area of 10,763 square km and a population of 1.3 million. It is divided into four provinces: L'Aquila, Teramo, Pescara, and Chieti. Its western border lies 80 km (50 mi) east of Rome. Abruzzo borders the region of Marche to the north, Lazio to the west and north-west, Molise to the south and the Adriatic Sea to the east. Geographically, Abruzzo is divided into a mountainous area in the west, which includes the highest massifs of the Apennines, such as the Gran Sasso d'Italia and the Maiella, and a coastal area in the east with beaches on the Adriatic Sea. 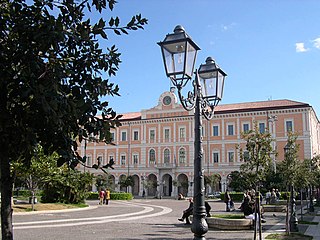 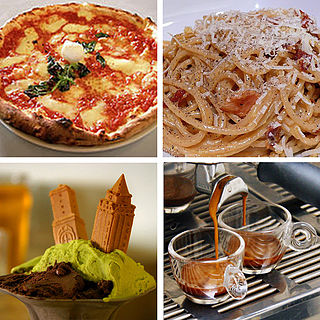 Italian cuisine is a Mediterranean cuisine consisting of the ingredients, recipes and cooking techniques developed across the Italian Peninsula since antiquity, and later spread around the world together with waves of Italian diaspora. Significant changes occurred with the colonization of the Americas and the introduction of potatoes, tomatoes, capsicums, maize and sugar beet — the latter introduced in quantity in the 18th century. It is one of the best known and most appreciated gastronomies worldwide. 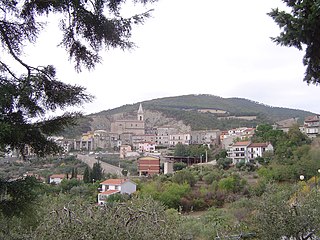 Guardialfiera is a comune (municipality) in the Province of Campobasso in the Italian region Molise, located about 30 kilometres (19 mi) northeast of Campobasso. It sits on a hilltop overlooking Lake Guardialfiera, which was created as a result of the damming of the Biferno river. 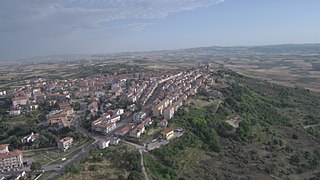 San Martino in Pensilis is a comune (municipality) in the Province of Campobasso in the Italian region Molise, located about 45 kilometres (28 mi) northeast of Campobasso.The settlement was formerly inhabited by an Arbëreshë community, who have since assimilated.

Ururi is an Arbëreshë comune in the Province of Campobasso, in the Italian region Molise, located about 40 kilometres (25 mi) northeast of Campobasso. Ururi developed in the late 16th century settlement when Albanian military captain Teodoro Crescia gained a feud for the annual sum of 300 ducats in a depopulated area near Larino. Until 1583, it was repopulated with many Albanian families.

Filignano is an Italian comune (municipality) of the Province of Isernia, in the region Molise.

Poggio Sannita is a comune (municipality) in the Province of Isernia in the Italian region Molise, located about 30 kilometres (19 mi) northwest of Campobasso and about 25 kilometres (16 mi) northeast of Isernia. Poggio Sannita is on a promontory surrounded by the Verrino and Sente rivers, both mostly torrential in character, especially the latter, which dries up completely during the summer.

Pozzilli is an Italian comune (municipality) of the Province of Isernia, in the region Molise, located about 50 kilometres (31 mi) west of Campobasso and about 15 kilometres (9 mi) southwest of Isernia.

Eccellenza Molise is the regional Eccellenza football division for clubs in the southern Italian region of Molise. It consists of 16 teams competing in one group. The winning team is promoted to Serie D, the top level of Italian amateur football. The club that finishes second may also gain promotion by taking part in a two-round national play-off. 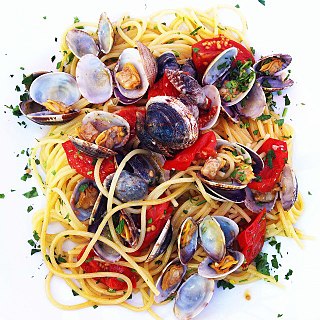 The cuisine of Sardinia is the traditional cuisine of the island of Sardinia, and the expression of its culinary art. It is characterised by its own variety, and by the fact of having been enriched through a number of interactions with the other Mediterranean cultures while retaining its own identity. Sardinia's food culture is strictly divided into food from the land and food from the sea, reflecting the island's historical vicissitudes and especially its geographic landscapes, spacing from the coastline to the ragged mountains of the interior. The Sardinian cuisine is considered part of the Mediterranean diet, a nutritional model that was proclaimed by UNESCO as an intangible cultural heritage.

Roman cuisine comes from the Italian city of Rome. It features fresh, seasonal and simply-prepared ingredients from the Roman Campagna. These include peas, globe artichokes and fava beans, shellfish, milk-fed lamb and goat, and cheeses such as Pecorino Romano and ricotta. Olive oil is used mostly to dress raw vegetables, while strutto and fat from prosciutto are preferred for frying. The most popular sweets in Rome are small individual pastries called pasticcini, gelato and handmade chocolates and candies. Special dishes are often reserved for different days of the week; for example, gnocchi is eaten on Thursdays, baccalà on Fridays, and trippa on Saturdays.

Molisan is a group of dialects of the Neapolitan language spoken in Molise, a region of Southern Italy. 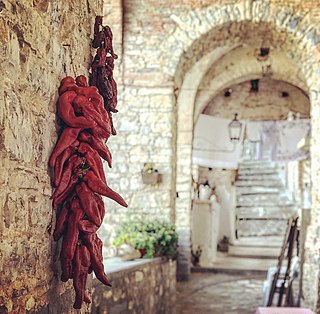 The cuisine of Basilicata, or Lucanian cuisine, is the cuisine of the Basilicata region of Italy. It is mainly based on the use of pork and sheep meat, legumes, cereals and vegetables, with the addition of aromas such as hot peppers, powdered raw peppers and horseradish. The local gastronomy is, for historical-cultural reasons, typically peasant, based on simple recipes and on the culture of reuse, in particular of meat and bread.