The RRAB-3 (Russian :ротативно-рассеивающая авиационная бомба, "rotationally dispersing aviation bomb"), nicknamed the Molotov bread basket (Finnish :Molotovin leipäkori), was a Soviet-made droppable bomb dispenser that combined a large high-explosive charge with a cluster of incendiary bombs. It was used against the cities of Finland during the Winter War of 1939–1940. The bomb consisted of a cylinder 2.25 metres (7.4 ft) long and 0.9 metres (3.0 ft) in diameter.

Described by journalist John Langdon-Davies in 1940:

As it fell from an aircraft, a small turbine on the nose turned to release a spring loaded casing which, on opening, scattered 100 or more incendiary bombs; the main HE charge in the tail of the weapon continued to fall as a conventional bomb. [1]

Other descriptions make no mention of a main charge and instead describe a large cylinder with vanes at the back that open out when the weapon is dropped. The vanes cause the bomb to spin and this has the effect of opening the sides and scattering the submunitions by centrifugal force. [2]

In 1939, the Soviet Foreign Minister, Vyacheslav Molotov, claimed the Soviet Union was not dropping bombs on Finland, but merely airlifting food to starving Finns. The Finns were not starving, and they dubbed the RRAB-3 cluster bomb "Molotov's bread basket." They also named the improvised incendiary device that they used to counter Soviet tanks, commonly known as the Molotov cocktail, "a drink to go with the food." [3] [ unreliable source? ]

This description seems to have become common currency among the British public in 1940. [4] During the Bristol Blitz, the locals dubbed a similar German device "Goering's bread basket". [5]

The Soviets had several versions: RRAB-1, RRAB-2, RRAB-3, with capacities of 1000, 500, and 250 kg respectively, each capable of holding various types of submunitions including HE, incendiary, and chemical.

Napalm is an incendiary mixture of a gelling agent and a volatile petrochemical. The name is a portmanteau of two of the constituents of the original thickening and gelling agents: co-precipitated aluminium salts of naphthenic acid and palmitic acid. Napalm B is the more modern version of napalm and, although distinctly different in its chemical composition, is often referred to simply as "napalm". 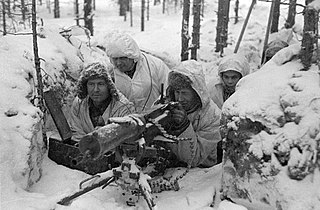 The Winter War also known as First Soviet-Finnish War was a war between the Soviet Union (USSR) and Finland. It began with a Soviet invasion of Finland on 30 November 1939, three months after the outbreak of World War II, and ended three and a half months later with the Moscow Peace Treaty on 13 March 1940. Despite superior military strength, especially in tanks and aircraft, the Soviet Union suffered severe losses and initially made little headway. The League of Nations deemed the attack illegal and expelled the Soviet Union from the organisation.

Vyacheslav Mikhailovich Molotov was a Russian politician and diplomat, an Old Bolshevik, and a leading figure in the Soviet government from the 1920s onward. He served as Chairman of the Council of People's Commissars from 1930 to 1941 and as Minister of Foreign Affairs from 1939 to 1949 and from 1953 to 1956. 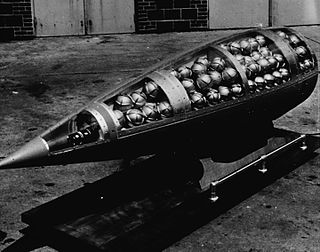 A cluster munition is a form of air-dropped or ground-launched explosive weapon that releases or ejects smaller submunitions. Commonly, this is a cluster bomb that ejects explosive bomblets that are designed to kill personnel and destroy vehicles. Other cluster munitions are designed to destroy runways or electric power transmission lines, disperse chemical or biological weapons, or to scatter land mines. Some submunition-based weapons can disperse non-munitions, such as leaflets. 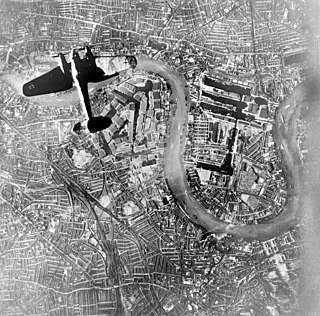 The Blitz was a German bombing campaign against the United Kingdom in 1940 and 1941, during the Second World War. The term was first used by the British press and originated from the term "Blitzkrieg", the German word for 'lightning war'. 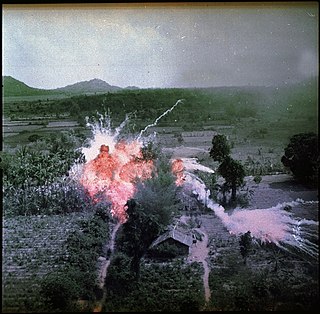 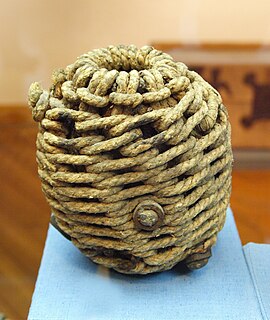 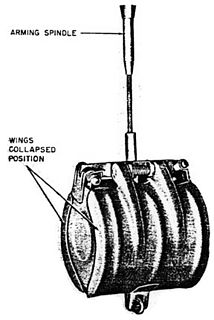 A Butterfly Bomb was a German 2 kilogram anti-personnel submunition used by the Luftwaffe during the Second World War. It was so named because the thin cylindrical metal outer shell which hinged open when the bomblet deployed gave it the superficial appearance of a large butterfly. The design was very distinctive and easy to recognise. SD 2 bomblets were not dropped individually, but were packed into containers holding between 6 and 108 submunitions e.g. the AB 23 SD 2 and AB 250-3 submunition dispensers. The SD 2 submunitions were released after the container was released from the aircraft and had burst open. Because SD 2s were always dropped in groups the discovery of one unexploded SD 2 was a reliable indication that others had been dropped nearby. This bomb type was one of the first cluster bombs ever used in combat and it proved to be a highly effective weapon. The bomb containers that carried the SD 2 bomblets and released them in the air were nicknamed the "Devil's Eggs" by Luftwaffe air and ground crew.

A blockbuster bomb or cookie was any of several of the largest conventional bombs used in World War II by the Royal Air Force (RAF). The term blockbuster was originally a name coined by the press and referred to a bomb which had enough explosive power to destroy an entire street or large building through the effects of blast in conjunction with incendiary bombs.

BL755 is a cluster bomb developed by Hunting Aircraft that contains 147 parachute-retarded high explosive anti-tank (HEAT) submunitions. Its primary targets are armoured vehicles and tanks with secondary soft target capabilities. It entered service with the Royal Air Force (RAF) in 1973.

George Lowther Steer was a South African-born British journalist, author and war correspondent who reported on wars preceding World War II, especially the Second Italo-Abyssinian War and the Spanish Civil War. During those wars he was employed by The Times, and his eye-witness reports did much to alert western nations of war crimes committed by the Italians in Ethiopia and by the Germans in Spain, although little was done to prevent them by the League of Nations. He returned to Ethiopia after the world war started and helped the campaign defeat the Italians and restore Hailie Selassie to the throne.

The Coventry Blitz was a series of bombing raids that took place on the English city of Coventry. The city was bombed many times during the Second World War by the German Air Force (Luftwaffe). The most devastating of these attacks occurred on the evening of 14 November 1940 and continued into the morning of 15 November.

The Bristol Blitz was the heavy bombing of Bristol, England, by the Nazi German Luftwaffe during the Second World War. Due to the presence of Bristol Harbour and the Bristol Aeroplane Company the city was a target for bombing, and was easily found as enemy bombers were able to trace a course up the River Avon from Avonmouth using reflected moonlight on the waters into the heart of the city. Bristol was the fifth most heavily bombed British city of World War II.

The CBU-87 Combined Effects Munition (CEM) is a cluster bomb used by the United States Air Force, developed by Aerojet General/Honeywell and introduced in 1986 to replace the earlier cluster bombs used in the Vietnam War. CBU stands for Cluster Bomb Unit. When the CBU-87 is used in conjunction with the Wind Corrected Munitions Dispenser guidance tail kit, it becomes much more accurate, and is designated CBU-103.

The BLU-97/B Combined Effects Bomb is the submunition used in several cluster bomb type weapon systems, mainly the CBU-87 and its precision-guided version CBU-103. When the bomblets fall, they separate from the main bomb and independently free fall to the ground. They contain an inflatable bag (ballute) on the top of them, which slows them down and spreads them out. Once the bomblets reach a force of 6 Gs they arm themselves. As the bomblets fall, they are also spinning. Arming takes about 2.6 seconds. They have a combined shaped charge, fragmentation and incendiary effect on the target. It is very effective against and mainly used for anti-personnel, anti-materiel, and anti-armor.

Starfish sites were large-scale night-time decoys created during the Blitz to simulate burning British cities. The aim was to divert German night bombers from their intended targets so they would drop their ordnance over the countryside. The sites were an extension of Colonel John Turner's decoy programme for airfields and factories. Following the bombing, and near destruction, of Coventry in November 1940, Turner was tasked with creating decoys for seven major cities.

This is a timeline of events that stretched over the period of World War II.

The Type-90, also known as the MZD-2, is a Chinese submunition used in the 122 mm Type-81 cluster rocket. It is made by Norinco. Type-81 rockets with Type-90 submunitions were used by Hezbollah against Israel in the 2006 Lebanon War, and they have been used in the Syrian Civil War as bombs dropped by weaponized Hezbollah quadcopters.

An improvised weapon is an object that was not designed to be used as a weapon but can be put to that use. They are generally used for self-defence or if the person is otherwise unarmed. In some cases, improvised weapons are commonly used by attackers in street fights, muggings, murders, gang warfare, during riots, or even during insurgencies, usually when conventional weapons such as firearms are unavailable or inappropriate.