Monbazillac is an Appellation d'Origine Contrôlée (AOC) for sweet white wine produced in the village of Monbazillac on the left bank of the Dordogne River just across from the town of Bergerac in South West France. The appellation covers almost 2,000 hectares (4,900 acres) of vineyards. [1]

The AOC of Monbazillac was first established in 1936, but the area has a long history of sweet wine production. Only wine made from grapes grown in Monbazillac that are affected by the "noble rot" ( Botrytis cinerea ) can be sold under the Monbazillac designation. (Dry white wines from the same area are sold as Bergerac sec.) The grape varieties Sémillon, Sauvignon blanc and Muscadelle are used for Monbazillac, and the permitted base yield is 40 hectoliter per hectare, although actual yields are lower for many producers. [1]

Monbazillac wines are broadly similar to Sauternes, but a difference is that Monbazillac often has a significantly higher proportion of Muscadelle in the blend, which can lead to slightly different aromas. While Monbazillac in former times could be a simpler semi-sweet wine, the style in more recent years has been that of a fully botrytized wine, since 1993 no mechanical harvesting is allowed and harvesting in several tries is required. [1]

Graves is an important subregion of the Bordeaux wine region. Graves is situated on the left bank of the Garonne River, in the upstream part of the region, southeast of the city Bordeaux and stretches over 50 kilometres (31 mi). Graves is the only Bordeaux subregion which is famed for all three of Bordeaux' three main wine types—reds, dry whites and sweet wines—although red wines dominate the total production. Graves AOC is also the name of one Appellation d'origine contrôlée (AOC) which covers most, but not all of the Graves subregion. 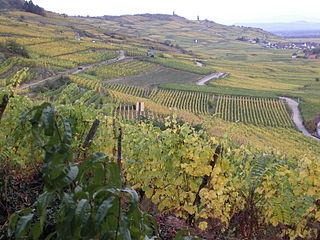 Alsace wine or Alsatian wine is produced in the Alsace region in France and is primarily white wine. Because of its Germanic influence, it is the only Appellation d'Origine Contrôlée region in France to produce mostly varietal wines, typically from similar grape varieties to those used in German wine. Along with Austria and Germany, it produces some of the most noted dry Rieslings in the world as well as highly aromatic Gewürztraminer wines. Wines are produced under three different AOCs: Alsace AOC for white, rosé and red wines, Alsace Grand Cru AOC for white wines from certain classified vineyards and Crémant d'Alsace AOC for sparkling wines. Both dry and sweet white wines are produced.

Collioure is an Appellation d'Origine Contrôlée (AOC) for French wines situated around the town of Collioure in the Roussillon wine region of France. Red, rosé and a few white wines are produced-the reds from Grenache noir, Mourvèdre, Syrah, Carignan and Cinsaut grapes; the white are made from a blend of from Grenache blanc and Grenache gris. The boundaries of the AOC are identical with the Banyuls AOC as many of the grapes grown in Collioure are destined for use in the fortified Vins doux naturels of the region. The grapes that do not get used for Banyuls are then produced as non-fortified still wines under the Collioure AOC.

Condrieu is a French wine-growing Appellation d'Origine Contrôlée (AOC) located in the northern Rhône, near Vienne and to the south of the Côte-Rôtie AOC. The vineyards are situated in the seven communes of Limony, Chavanay, Malleval, Saint-Michel-sur-Rhône, Saint-Pierre-de Boeuf, Vérin, and Condrieu. These communes are in the French departments of Ardèche, Rhône and Loire on the steep slopes of the foothills of the Massif Central on the right bank of the Rhône. The four southernmost communes can also produce wine under the Saint-Joseph AOC. The wines made in this AOC are exclusively white, from the Viognier grape, which may have originated in the region. Within Condrieu is the enclave AOC of Château-Grillet, producing wines that are also 100% Viognier. The Condrieu AOC was officially created in 1940.

Côtes du Rhône is a wine-growing Appellation d'Origine Contrôlée (AOC) for the Rhône wine region of France, which may be used throughout the region, also in those areas which are covered by other AOCs. In a limited part of the region, the Côtes-du-Rhône Villages AOC may be used, in some cases together with the name of the commune.

A Bordeaux wine is any wine produced in the Bordeaux region of southwest France. Bordeaux is centered on the city of Bordeaux, on the Garonne River. To the north of the city the Dordogne River joins the Garonne forming the broad estuary called the Gironde and covering the whole area of the Gironde department, with a total vineyard area of over 120,000 hectares, making it the largest wine growing area in France. Average vintages produce over 700 million bottles of Bordeaux wine, ranging from large quantities of everyday table wine, to some of the most expensive and prestigious wines in the world. The vast majority of wine produced in Bordeaux is red, with sweet white wines, dry whites, and rosé and sparkling wines collectively making up the remainder. Bordeaux wine is made by more than 8,500 producers or châteaux. There are 54 appellations of Bordeaux wine. 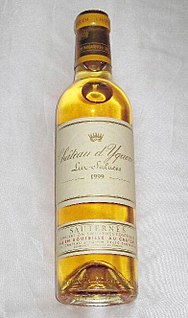 Sauternes is a French sweet wine from the Sauternais region of the Graves section in Bordeaux. Sauternes is made from Sémillon, Sauvignon blanc, and Muscadelle grapes that have been affected by Botrytis cinerea, also known as noble rot. This causes the grapes to become partially raisined, resulting in concentrated and distinctively flavored wines. Due to its climate, Sauternes is one of the few wine regions where infection with noble rot is a frequent occurrence. Even so, production is a hit-or-miss proposition, with widely varying harvests from vintage to vintage. Wines from Sauternes, especially the Premier Cru Supérieur estate Château d'Yquem, can be very expensive, largely due to the very high cost of production. Barsac lies within Sauternes and is entitled to use either name. Somewhat similar but less expensive and typically less-distinguished wines are produced in the neighboring regions of Monbazillac, Cérons, Loupiac and Cadillac. In the United States, there is a semi-generic label for sweet white dessert wines known as sauterne without the "s" at the end and uncapitalized.

Saussignac is a wine appellation in South West France. The Saussignac AOC is used exclusively for a sweet white dessert wine, similar to Monbazillac but a little drier. The grapes used are generally Sémillon grapes which have been affected by Botrytis cinerea. To qualify for the appellation, the grapes must be grown, and the wine produced, in the four communes of Saussignac, Razac-de-Saussignac, Monestier and Gageac-Rouillac. A fundamental difference between Saussignac and all other sweet or late-harvest wines is that Chaptalization, or the addition of sugar, is forbidden under the rules of the AOC.

The wine regions of Bordeaux are a large number of wine growing areas, differing widely in size and sometimes overlapping, which lie within the overarching wine region of Bordeaux, centred on the city of Bordeaux and covering the whole area of the Gironde department of Aquitaine. 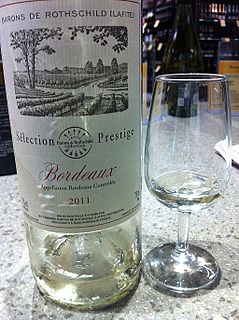 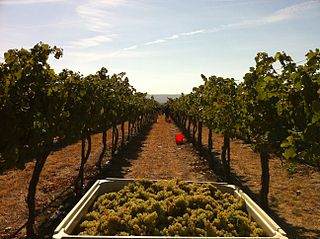 In viticulture, the yield is a measure of the amount of grapes or wine that is produced per unit surface of vineyard, and is therefore a type of crop yield. Two different types of yield measures are commonly used, mass of grapes per vineyard surface, or volume of wine per vineyard surface. 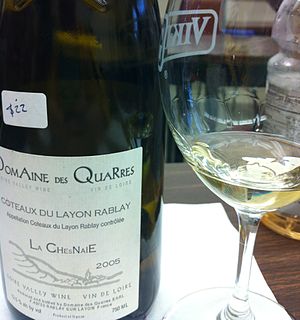 Coteaux du Layon is an Appellation d'origine contrôlée (AOC) for sweet white wine in the Loire Valley wine region of France. Coteaux du Layon is situated in the Anjou district of the region, along the river Layon, which is a tributary of the Loire River. Six of the villages (communes), namely Beaulieu-sur-Layon, Faye-d'Anjou, Rablay-sur-Layon, Rochefort-sur-Loire, Saint-Aubin-de-Luigné and Saint-Lambert-du-Lattay are allowed to add their name to that of the appellation. Usually, the "de" or "sur" part is dropped, to give names like Coteaux du Layon Beaulieu and Coteaux du Layon Saint-Aubin. Furthermore, two villages within the Coteaux du Layon area form their own respective AOC – Bonnezeaux and Chaume. Finally, a favoured enclave within Chaume is a separate AOC under the name Quarts de Chaume. For the geographically delimited AOCs, required grape maturity is higher and allowed yield is lower. The best vineyards are generally located on the north bank of the Layon, where they enjoy a good sun exposure on roughly south-facing slopes. Coteaux du Layon including its enclave appellations cover about 1,400 hectares in the early 2000s.

Anjou wine is produced in the Loire Valley wine region of France near the city of Angers. The wines of region are often grouped together with the wines of nearby Saumur as "Anjou-Saumur". Along with the wines produced further east in Touraine, Anjou-Saumur make what is collectively known as the "Middle Loire" (as opposed to the "Upper Loire" which includes the wine regions of Sancerre and Pouilly-Fumé. Within the Anjou wine region are several Appellation d'origine contrôlées responsible for a broad spectrum of wines including still red, white and rosé produced with varying levels of sweetness. Extending across the Deux-Sèvres, Maine-et-Loire and Vienne départements, the generic Anjou AOC appellation and its various sub-appellations encompasses vineyards across more than 151 communes.

Sainte-Croix-du-Mont is an Appellation d'origine contrôlée (AOC) for sweet white wine from the Bordeaux wine region in France.

The Bergerac wine-growing region, a subregion of South West France around the town of Bergerac in the Dordogne department, comprises 93 communes. Its boundaries correspond more or less with those of the Arrondissement of Bergerac, immediately east of the Bordeaux wine region. 1,200 wine-growers cultivate an area of 12,000 hectares. The Bergerac area contains 13 Appellations d'origine contrôlées (AOCs) for red, white and rosé wines.

Cadillac is an Appellation d'Origine Contrôlée (AOC) for sweet white wine from the Bordeaux wine region in France. It is located within the Entre-Deux-Mers subregion of Bordeaux. It takes its name from the town of Cadillac. 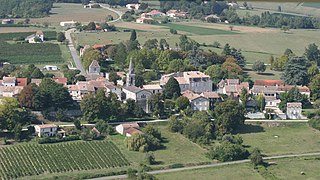 Merlot blanc is a white French wine grape variety that came from a natural crossing of the Bordeaux wine grape Merlot and the Cognac grape Folle blanche. The grape is distinct from Merlot gris which is a pink-skinned color mutation of the red wine grape Merlot and is sometimes used in vin gris and rosé wines. Plantings of Merlot blanc were first discovered in 1891 but cuttings of the vine have not been widely propagated and the variety is very rare. It is not used to make the sweet White Zinfandel-style wine White Merlot that is made by some California wine producers. Those wines are made from a saignee of red Merlot wine.