Monica Sinclair (23 March 1925 –7 May 2002) was a British operatic contralto, who sang many roles with the Royal Opera, Covent Garden during the 1950s and 1960s, and appeared on stage and in recordings with Joan Sutherland, Luciano Pavarotti, Maria Callas, Sir Thomas Beecham, Sir Malcolm Sargent and many others. She had a great gift for comedy, and sang in recordings of many of the Gilbert and Sullivan operettas, as well as in recordings from the standard operatic repertory.

Monica Sinclair was born on 23 March 1925, in Evercreech, Somerset. Her music studies were at the Royal Academy of Music. She made her debut with the Carl Rosa Opera Company in 1948, singing Suzuki in Puccini's Madama Butterfly . Her Covent Garden debut came in 1949, as the Second boy in Mozart's The Magic Flute . Her early Covent Garden roles included Maddalena ( Rigoletto ), Mrs Sedley ( Peter Grimes ), Feodor ( Boris Godunov ), Rosette ( Manon ), Flosshilde ( Das Rheingold ), Siegrune ( Die Walküre ), Azucena ( Il trovatore ), Pauline ( The Queen of Spades ), Mercedes ( Carmen ) and the Voice of Antonia's Mother ( The Tales of Hoffmann ). She can be heard as the voice of Nicklaus in the 1951 Powell and Pressburger film The Tales of Hoffmann . [1]

She made her Glyndebourne debut in 1954 in the comic role of Ragonde in the first British performance of Rossini's Le comte Ory . There she also sang Berta ( The Barber of Seville ), Marcellina ( The Marriage of Figaro ), Dryade ( Ariadne auf Naxos ), and Queen Henrietta ( I puritani , with Joan Sutherland). In 1965 she appeared in a television version of The Rise and Fall of the City of Mahagonny on BBC2 as Mrs Begbick. [2]

Her other international appearances included the title role in Lully's Armide at Bordeaux in 1955. [3]

Monica Sinclair created a number of roles (at Covent Garden unless indicated):

Among Monica Sinclair's recordings are: [5]

Monica Sinclair's marriage to Anthony Tunstall, a former Covent Garden horn player, with whom she had six children, did not survive. [3]

Roy Galbraith Henderson CBE was a leading English baritone in the 1920s, 1930s and 1940s. He later became a teacher of singing, his most notable student being Kathleen Ferrier.

Dame Joan Alston Sutherland, was an Australian coloratura soprano noted for her contribution to the renaissance of the bel canto repertoire from the late 1950s through to the 1980s.

Sir John Michael Pritchard, CBE, born Stanley Frederick Pritchard, was an English conductor. He was known for his interpretations of Mozart operas and for his support of contemporary music. 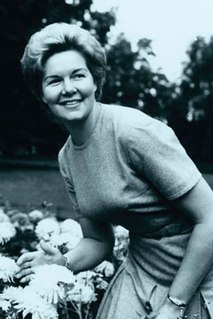 Margreta Elkins AM was an Australian mezzo-soprano. She sang at The Royal Opera and with Opera Australia and other companies, but turned down offers to sing at the Metropolitan Opera, Bayreuth and Glyndebourne. She recorded alongside sopranos such as Maria Callas and Joan Sutherland. 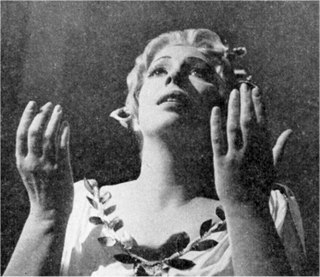 Dennis Noble was a noted British baritone and teacher. He appeared in opera, oratorio, musical comedy and song, from the First World War through to the late 1950s. He was renowned for his enunciation and diction. He became the most prolific radio broadcaster of his time.

Anna Justine Steiger, born February 13, 1960 is a British and American opera singer who has sung leading soprano and mezzo-soprano roles in British, European and North American opera houses. She has sung many recitals at festivals which have been broadcast live on the BBC, Radio France and the Australian Broadcasting Corporation. In 2010, she was invited to participate in the Australian Chamber Music Festival. She is still active as a recitalist and opera singer. She also has a year one Master in Food History from the University François Rabelais de Tours, France.

Murray Dickie OBE was a Scottish tenor opera singer and director, who established his career in England, Austria and Italy during the 1950s. In addition to his extensive stage work he was a prolific recording artist.

Gerald English was an English tenor. He performed operatic and concert repertoire, was a recording artist, and has been an academic.

April Cantelo is an English soprano.

Jeannette Sinclair is an English soprano. She sang a variety of roles as a principal soprano at the Royal Opera House, Covent Garden and at Glyndebourne Festival Opera, during the 1950s and 1960s. Her work for the BBC encompassed opera, oratorio and many recitals of lieder, English song and French chanson, light music and appearances at the BBC Henry Wood Promenade concerts, 1960-9.

Bernadette Eileen Cullen is an Australian Dramatic Mezzo-soprano who has encomposed all the great leading operatic mezzo roles and concert repertoire in Australia and throughout Europe and Asia.

John Ewen Cameron was an Australian baritone singer, who made most of his career in Britain. He became known for his portrayal of characters in modern operas by composers from Australia, Britain and continental Europe, and for his recordings with conductors such as Sir Thomas Beecham, Sir Adrian Boult, the young Colin Davis, and particularly Sir Malcolm Sargent.

Emelie Hooke was an Australian soprano who was notable in opera, oratorio and concert, and sang in Australia, England, Europe and South Africa.