Monieux is a commune in the Vaucluse department in the Provence-Alpes-Côte d'Azur region in southeastern France.

The commune of Monieux is located on the plateau of the Mounts of Vaucluse, near to the commune of Sault. It shelters on its territory part of the classified as sites “Reserve of Biosphere” of the Ventoux Mount.

The commune is located in the zone of influence of the Mediterranean climate. The summers are hot and dry, related to the increase in altitude of the subtropical anticyclones, intersected with stormy episodes sometimes violent one. The winters are soft. Precipitations are not very frequent and rare snow. It there 275 days of sun per year.

It primarily confines in an activity of medium mountains of the type of Provence with a production of lavender, of lavandin, of old variety of wheat and of the derivative products. Sheep breeding and the production of honey holds also an important place.

The town of Monieux is the site of a medieval pogrom that occurred at the end of the 11th century, as determined by Historian Norman Golb. The evidence of this attack by Crusaders on the community is indicated through the discovery of a manuscript in the Cairo Geniza. When Jacob Mann first translated the beginning portion of the document in 1931, the location of the attack described was misinterpreted as taking place in the province of Anjou. In 1969, however, when Norman Golb retranslated the document, he discovered that the referral to the pogrom’s location as a town did not coincide correctly with Mann’s assessment of the locale as Anjou, which was recognized as a province during the time period. Through further inspection, he found that an improper reading of the Hebrew script had led Mann further astray in his translation; Golb, therefore, ultimately published his translation of the document in its entirety, highlighting that Monieux and not Anjou was the site of the attack. [4]

The document, a vellum-inscribed letter written in Hebrew by Joshua B. Obadiah of Monieux, France, exposes the severe maltreatment of the Jewish people when their small community in southeastern France was attacked during the First Crusade of 1096–1099 CE. The manuscript itself serves a unique purpose in that it was not written in the context of memoirs such as those of Usama Ibn Munqidh [5] and Fulcher of Chartres, [6] but was constructed as a letter of recommendation for a woman of note who was living in the community of Monieux during the time of the pogrom. Obadiah’s writings feature an account of the profound misfortune of a proselytess, a woman who, having left her homeland after converting to Judaism, first took refuge in Narbonnne, France. There, she married R. David, a member of a well-respected family in the region. When she began to fear that her relatives would find her via the established Christian authority in Narbonne, she left the city and settled in the remote village of Monieux, France, roughly six years prior to the arrival of the Crusaders. [7]

Obadiah writes of the harrowing fate of the proselytess during the severe attack on the Jews by the French Crusaders, in which her husband was murdered in the synagogue and her two young children, a boy and a girl, were taken captive—likely to be converted to Christianity by the enemy. Left to care for her infant son, Obadiah describes the woman as penurious and “in thirst and nakedness, lacking all provisions, and with no fund to pay for her (daily needs) and (those of) her son.” [8] With only a small number of Jews remaining after the pogrom, “a few from many,” [9] the residents of Monieux no longer had the means to care for the widowed proselytess. This letter, therefore, written by a literate community member in Monieux, provides a full breadth of the woman’s hardships in hopes that she could present it to members of another Jewish community and be taken in there. The discovery of the letter in Egypt suggests that the woman may have travelled far eastward from Monieux after the pogrom, ultimately settling in the flourishing Jewish community of Cairo, where she could be cared for effectively. [10] 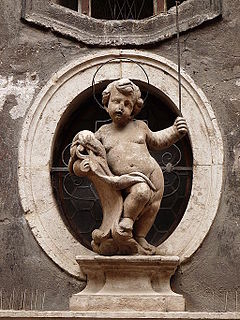 Blood libel or ritual murder libel is an antisemitic canard which falsely accuses Jews of murdering Christian children in order to use their blood as part of religious rituals. Historically, these claims—alongside those of well poisoning and host desecration—have been a major theme of the persecution of Jews in Europe. 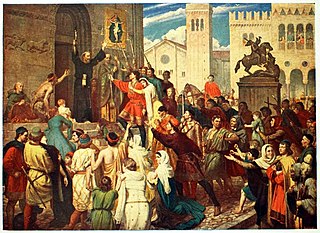 Year 1096 (MXCVI) was a leap year starting on Tuesday of the Julian calendar. 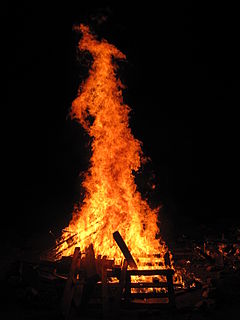 Iyar is the eighth month of the civil year and the second month of the Jewish religious year on the Hebrew calendar. The name is Babylonian in origin. It is a month of 29 days. Iyar usually falls in April–May on the Gregorian calendar.

Count Emicho was a count in the Rhineland in the late 11th century. He is also commonly referred to as Emicho of Leiningen or Emich of Flonheim. In 1096 he was the leader of the Rhineland massacres which were a series of mass murders of Jews that took place during the People's Crusade.

The history of antisemitism, defined as hostile actions or discrimination against Jews as a religious or ethnic group, goes back many centuries, with antisemitism being called "the longest hatred". Jerome Chanes identifies six stages in the historical development of antisemitism: 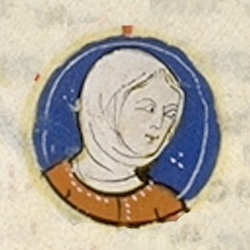 Adela of Normandy, of Blois, or of England, also known as Saint Adela in Roman Catholicism, was a daughter of William the Conqueror and Matilda of Flanders who later became the countess of Blois, Chartres, and Meaux by marriage to Stephen II of Blois. Her husband greatly benefited from the increased social status and prestige that came with such a marriage. She brought with her not only her bloodline, but a dowry of money and other movable goods from the prodigious store of Anglo-Norman wealth. She was regent of Blois during the absence of her spouse in 1096–1100 and 1101–02, and during the minority of her son from 1102 until 1120. Adela was the mother of King Stephen of England and Bishop Henry of Winchester.

Persecution of Jews has been a major part of Jewish history, prompting shifting waves of refugees throughout the diaspora communities. 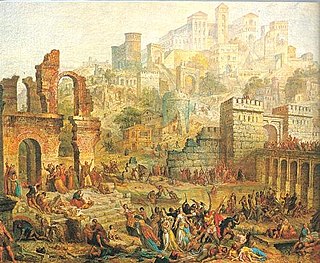 The Rhineland massacres, also known as the persecutions of 1096 or Gzerot Tatnó, were a series of mass murders of Jews perpetrated by mobs of German Christians of the People's Crusade in the year 1096, or 4856 according to the Jewish calendar. The massacre is seen as the first in a sequence of antisemitic events in Europe which culminated in the Holocaust.

Norman Golb was the Ludwig Rosenberger Professor in Jewish History and Civilization at the Oriental Institute of the University of Chicago. He earned his PhD from Johns Hopkins University in 1954. While a student he had fellowships to do studies at Dropsie College in Philadelphia and another that ended up with him spending from 1955-1957 studying at the Hebrew University of Jerusalem.

The history of the Jews and the crusades became a part of the history of antisemitism for the Jews in the Middle Ages. The call for the First Crusade touched off new persecutions of the Jews that would continue on and off for centuries.

The history of the Jews in Europe spans a period of over two thousand years. Some Jews, a Judaean Israelite tribe from the Levant, migrated to Europe just before the rise of the Roman Empire. A notable early event in the history of the Jews in the Roman Empire was Pompey's conquest of the East beginning in 63 BCE, although Alexandrian Jews had migrated to Rome before this event.

Antisemitism in the history of the Jews in the Middle Ages became increasingly prevalent in the Late Middle Ages. Early instances of pogroms against Jews are recorded in the context of the First Crusade. Expulsion of Jews from cities and instances of blood libel become increasingly common in the 13th to 15th centuries. This trend peaked only after the end of the medieval period, and subsided only with Jewish emancipation in the late 18th to 19th century.

Radulphe was a French monk who, without permission from his superiors, left his monastery in France and travelled to the Rhine Valley during the Second Crusade (1147–49) where he preached "that the Jews should be slain as the enemies of the Christian religion." At Cologne Simon "the Pious" was murdered and mutilated; at Speyer a woman was tortured on the rack to persuade her to Christianity. Secular prelates tried to protect the Jews. Arnold, the Archbishop of Cologne gave them a fortified castle as refuge, and allowed them to arm themselves; the Crusaders refrained from attacking the castle, but killed any unconverted Jew that fell into their clutches. Henry I, Archbishop of Mainz admitted into his house some Jews pursued by a mob; the mob forced its way in, and killed them before his eyes.

Who Wrote the Dead Sea Scrolls? The Search for the Secret Of Qumran is a book by Norman Golb which intensifies the debate over the origins of the Dead Sea Scrolls, furthering the opinion that the scrolls were not the work of the Essenes, as other scholars claim, but written in Jerusalem and moved to Qumran in anticipation of the Roman siege in 70 AD. 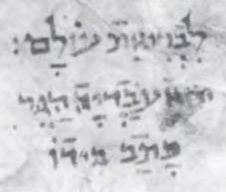 Obadiah the Proselyte was an early-12th-century Italian convert to Judaism. He is best known for his memoirs and the oldest surviving notation of Jewish music, both unique survivals. 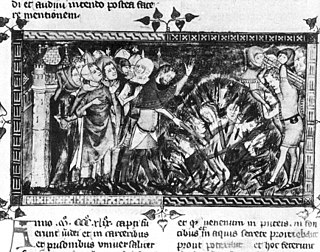 The Black Death persecutions and massacres were a series of violent attacks on Jewish communities falsely blamed for outbreaks of the Black Death in Europe from 1348 to 1351.

Andreas was the Archbishop of Bari from 1062 to at least 1066, and probably somewhat longer. In 1066, he travelled to Constantinople where at some point he converted to Judaism. He then fled to the Muslim-dominated Egypt and remained there until his death in 1078.

The history of the Jews in Alexandria, Egypt, dates back to the founding of the city by Alexander the Great in 332 BCE. Jews in Alexandria played a crucial role in the political, economic, and religious life of Hellenistic and Roman Alexandria, with Jews comprising about 35% of the city's population during the Roman Era. Alexandrian Jewry were the founders of Hellenistic Judaism and the first to translate the Torah from Hebrew to Koine Greek, a document known as the Septuagint. Many important Jewish writers and figures came from or studied in Alexandria, such as Philo, Ben Sira, Tiberius Julius Alexander and Josephus. The position of Alexandria's Jewry began deteriorating during the Roman era, as deep antisemitic sentiment began developing amongst the city's Greek and Egyptian populations. This led to the subsequent Alexandrian pogrom in 38 CE and the Alexandria riot in 66 CE, which was in parallel with the outbreak of the First Jewish–Roman War. Alexandria's Jewry began to diminish, leading to a mass emigration of Alexandrian Jews to Rome, as well as other Mediterranean and North African cities. By the beginning of the Byzantine era, the Jewish population had again increased, but suffered from the persecutions of the Christian Church, and during the subsequent Muslim conquest of Egypt, the number of Jews in Alexandria increased greatly, with some estimates numbering around 400,000. Following the establishment of the State of Israel in 1948, and the ensuing Six-Day War, almost all of Alexandria's Jewish population were expelled from the country and emigrated to Israel.