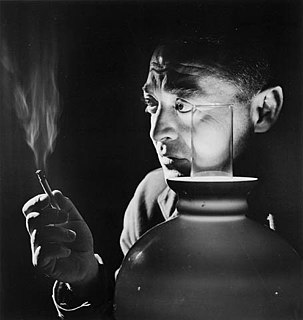 Peter Lorre was a Hungarian-American actor. Lorre began his stage career in Vienna before moving to Germany where he worked first on the stage, then in film in Berlin in the late 1920s and early 1930s. Lorre caused an international sensation in the Weimar Republic-era film M (1931), directed by Fritz Lang, in which he portrayed a serial killer who preys on little girls.

Reinhold Häussermann (1884–1947) was a German-born Austrian stage and film actor. Haussermann appeared in twenty-one films during his career, largely in supporting roles in films such as Karl Leiter's The Missing Wife (1929). He was the father of the actor and director Ernst Haeussermann. His daughter in law was the actress Susi Nicoletti. 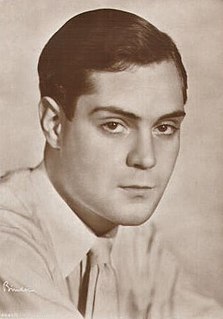 Hans Joachim Schaufuß was a German actor. Schaufuß began as a child actor, appearing in Emil and the Detectives (1931) and The White Demon (1932). From the mid-1930s he began to appear in more mature roles. He was killed in Oryol in the Soviet Union while serving on the Eastern Front during the Second World War.

Heinz Salfner was a German stage and film actor. Salfner appeared in more than sixty films during his career. He played the lead in the 1932 crime film A Shot at Dawn.

Narcotics is a 1932 German drama film directed by Kurt Gerron and Roger Le Bon and starring Jean Murat, Danièle Parola and Jean Worms. It is the French-language version of the 1932 German film The White Demon.

Roger Le Bon (1891–1956) was a French film producer and director. Le Bon co-directed a number of French-language versions of films made by the German studio UFA. In 1932 he co-directed the crime thriller Narcotics.

Danièle Parola was a French film actress. She starred in the 1932 crime film Narcotics. She was married to the actor and producer André Daven.

Jeanne Marie-Laurent was a French film actress. She appeared in more than ninety films during her career, including the 1932 thriller Narcotics.

Gaston Mauger was a French stage and film actor. He made around forty film appearances, including the 1932 thriller Narcotics.

Rudolf Schaad was a Russian-born German film editor. He edited the 1933 film Invisible Opponent and its French-language version The Oil Sharks.

Ery Bos was a German dancer and film actress. She established herself as a star in the cinema of the Weimar Republic, but was forced to flee following the takeover of the Nazi Party due to her Jewish background.

Werner Bohne (1895-1940) was a German cinematographer of the Weimar and Nazi eras. He was killed in 1940, while working on a propaganda documentary during a battle as part of the invasion of Norway.