Last updated September 20, 2020
This article is about the department. For the mountain, see Donnersberg.

Mont-Tonnerre [mɔ̃.tɔ.nɛʁ] was a department of the First French Republic and later the First French Empire in present-day Germany. It was named after the highest point in the Palatinate, the Donnersberg ("Thunder Mountain", possibly referring to Donar, god of thunder). It was the southernmost of four departments formed in 1798 when the west bank of the Rhine was annexed by France. Prior to the French occupation, its territory was divided between the Archbishopric of Mainz, the Bishopric of Speyer, the Bishopric of Worms, Nassau-Weilburg, Hesse-Darmstadt, the Electorate of the Palatinate and the imperial cities of Worms and Speyer. Its territory is now part of the German states of Rhineland-Palatinate and Saarland. Its capital was Mainz (French : Mayence).

The department was subdivided into the following arrondissements and cantons (situation in 1812): [1]

After Napoleon was defeated in 1814, the department was divided between the Kingdom of Bavaria (Palatinate) and the Grand Duchy of Hesse (around Mainz). 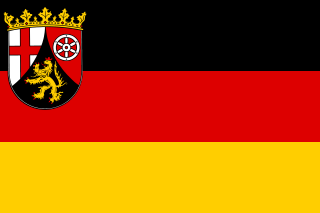 Rhineland-Palatinate is a western state of Germany. It covers 19,846 km2 (7,663 sq mi) and has about 4.05 million residents. It is the ninth largest and sixth most populous of the sixteen states. Mainz is the capital and largest city. Other cities are Ludwigshafen am Rhein, Koblenz, Trier, Kaiserslautern and Worms. It is bordered by North Rhine-Westphalia, Saarland, Baden-Württemberg and Hesse and by the countries France, Luxembourg and Belgium.

Worms is a city in Rhineland-Palatinate, Germany, situated on the Upper Rhine about 60 kilometres (40 mi) south-southwest of Frankfurt-am-Main. It had approximately 82,000 inhabitants as of 2015. 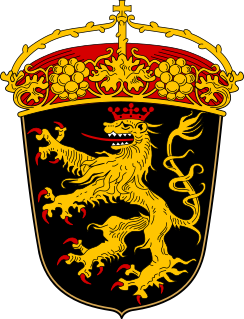 The Palatinate, historically also Rhenish Palatinate or Lower Palatinate (Unterpfalz), is a region in southwestern Germany. It occupies roughly the southernmost quarter of the German federal state of Rhineland-Palatinate (Rheinland-Pfalz), covering an area of 5,451 square kilometres (2,105 sq mi) with about 1.4 million inhabitants. Its residents are known as Palatines. 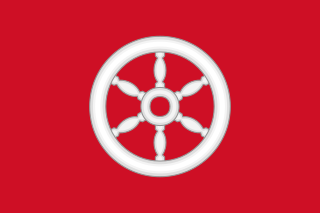 Rhenish Hesse or Rhine-Hesse is a region and a former government district in the German state of Rhineland-Palatinate, made up of those territories west of the Upper Rhine river that from 1816 were part of the Grand Duchy of Hesse and of the People's State of Hesse until 1945. The hilly countryside is largely devoted to vineyards, comprising the Rheinhessen wine region. 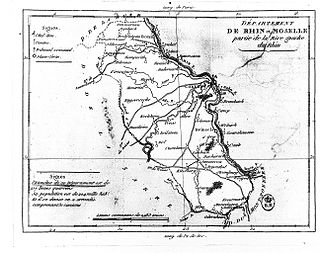 Rhin-et-Moselle was a department of the First French Republic and First French Empire in present-day Germany. It was named after the rivers Rhine and Moselle. It was formed in 1798, when the left bank of the Rhine was annexed by France. Until the French occupation, its territory was divided between the Archbishopric of Cologne, the Archbishopric of Trier, and the Electorate of the Palatinate. Its territory is now part of the German states of Rhineland-Palatinate and North Rhine-Westphalia. Its capital was Koblenz.

Sarre was a department in the First French Republic and First French Empire. Its territory is now part of Germany and Belgium. Named after the river Saar, it was created in 1798 in the aftermath of the Treaty of Campo Formio of 18 October 1797 which ceded the left bank of the Rhine to France.

Pirmasens is an independent town in Rhineland-Palatinate, Germany, near the border with France. It was famous for the manufacture of shoes. The surrounding rural district was called Landkreis Pirmasens from 1818 until 1997, when it was renamed to Südwestpfalz.

The Prince-Bishopric of Speyer, formerly known as Spires in English, was an ecclesiastical principality in what are today the German states of Rhineland-Palatinate and Baden-Württemberg. It was secularized in 1803. The prince-bishop resided in Speyer, a Free Imperial City, until the 14th century when he moved his residence to Uddenheim (Philippsburg), then in 1723 to Bruchsal, in large part due to the tense relationship between successive prince-bishops and the civic authorities of the Free City, officially Protestant since the Reformation. The prince-provostry of Wissemburg in Alsace was ruled by the prince-bishop of Speyer in a personal union. 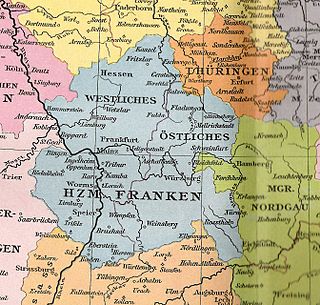 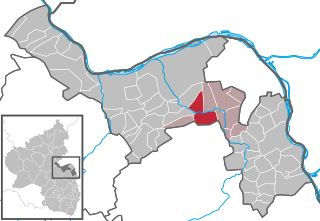 Stadecken-Elsheim is an Ortsgemeinde – a municipality belonging to a Verbandsgemeinde, a kind of collective municipality – in the Mainz-Bingen district in Rhineland-Palatinate, Germany. 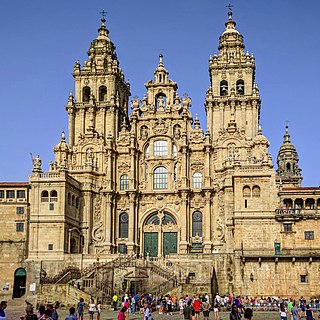 The Palatine Ways of St. James are those sections of the Way of St. James in the Palatinate region of Germany and part of the historic pilgrimage route to the northwest Spanish town of Santiago de Compostela. It was there that, according to Christian tradition, the Apostle Saint James the Greater was buried.

The history of Speyer begins with the establishment of a Roman camp in 10 BCE, making it one of Germany's oldest cities. Its name evolved from Spira, first mentioned in 614. As of 1294 a Free Imperial City, the town became renowned for its Romanesque cathedral, its vibrant Jewish community, its seat of the Imperial Chamber Court, for 50 diets that took place within its walls, most notably 1526 and 1529, and last but not least, for the Protestation at Speyer. For several centuries from the Middle Ages into the early modern period, Speyer was one of the main centres of gravity of the Holy Roman Empire.

The Circle of the Rhine or Rhine Circle, sometimes the Bavarian Rheinkreis, was the name given to the territory on the west bank of the Rhine from 1816 to 1837 which was one of 15 administrative districts of the Kingdom of Bavaria. Before the French revolutionary wars (1792) most of the land had belonged to the Electoral Palatinate. At the Congress of Vienna in 1815 it was initially promised to the Empire of Austria after having been under a provisional joint Austro-Bavarian administration since 1814. However, in the Treaty of Munich (1816), Austria relinquished the territory to Bavaria. 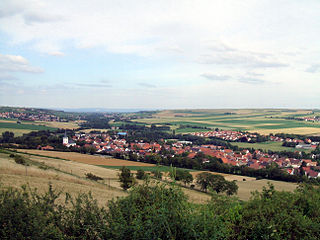 The Zellertal is a valley region in the east of the North Palatine Uplands in the German state of Rhineland-Palatinate. Its western part belongs to Palatine Donnersbergkreis, its eastern part to Rhenish Hessian Alzey-Worms. The valley is named after the old municipality of Zell, which became part of the new Zellertal municipality in 1976.