Mont Sokbaro is located on the border of the Donga Department in Benin and the Kara Region in the country of Togo, close to the source of the Mono River. It is located 58 kilometres (36 mi) from the town of Bassila. [1] The hill is part of the quartzite [2] massif of the Atakora Mountains that continues westward into the latter country, where they are called the Togo Mountains. Some of these have higher altitudes. On the Eastern side into Benin lies lower land with an average elevation of 550 metres (1,800 ft). Close by lie the villages of Tchèmbèré, Aledjo-Koura and Akaradè. [3] Hiking activities occur to the top of the hill, but the area is in need more touristic development. [1]

The geography of Switzerland encompasses the geographical features of Switzerland, a mountainous and landlocked country located in Western and Central Europe. Switzerland is world-famous for the beauty and uniqueness of its landscapes. It is surrounded by 5 countries: Austria and Liechtenstein to the east, France to the west, Italy to the south and Germany to the north. Switzerland has a maximum north–south length of 220 kilometres (140 mi) and an east–west length of about 350 kilometres (220 mi).

Benin, a narrow, key-shaped, north-south strip of land in West Africa, lies between the Equator and the Tropic of Cancer. Benin's latitude ranges from 6°30′ N to 12°30′ N and its longitude from 1° E to 3°40′ E. Benin is bounded by Togo to the west, Burkina Faso and Niger to the north, Nigeria to the east, and the Bight of Benin to the south. 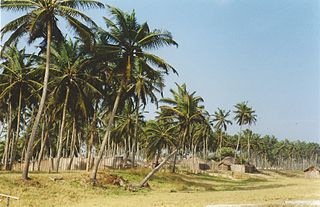 The Pir Panjal Range, also Panchaladeva in Hindu scriptures, is a group of mountains in the Inner Himalayan region, running from east-southeast (ESE) to west-northwest (WNW) across the Indian state of Himachal Pradesh, the Indian Union Territory of Jammu and Kashmir and the Pakistani administered territory of Azad Kashmir, where the average elevation varies from 1,400 m (4,600 ft) to 4,100 m (13,500 ft). The Himalayas show a gradual elevation towards the Dhauladhar and Pir Panjal ranges. Pir Panjal is the largest range of the Lesser Himalayas. Near the bank of the Sutlej River, it dissociates itself from the Himalayas and forms a divide between the Beas and Ravi rivers on one side and the Chenab on the other. The renowned Galyat mountains are also located in this range.

The Togo Mountains is a mountain range which stretches across the central region of the West African country of Togo and across the eastern and western borders of that country into Ghana and Benin. In Ghana, the range is also known as the Akwapim Hills, and in Benin it is also known as the Atakora Mountains. Part of the range is associated with the country of Niger, where the W National Park is found. The African wild dog, Lycaon pictus, was historically found in this region but may now be extirpated from this locale.

Plateau de Beille is a ski resort in the Pyrenees. It is situated in the Ariège department, and in the region of the Occitanie. The winter sports resort lies at a height of 1,790 m (5,870 ft).

Saint-Alexis-des-Monts is a parish municipality in the Mauricie region of the province of Quebec in Canada.

Aledjo-Koura is a village and arrondissement in the commune of Bassila in the Donga Department of western Benin. It is located near the border with Togo, close to Mont Sokbaro, which is widely cited as the highest point of Benin.

Mont-Saint-Bruno National Park is a small national park of Quebec located near the municipality of Saint-Bruno-de-Montarville, 15 kilometres (9.3 mi) to the east of Montréal on the south shore of the Saint Lawrence River. The park, with an area of 8.84 square kilometres (3.41 sq mi), notably includes the Mount Saint-Bruno, one of the Monteregian Hills which peaks at 218 metres (715 ft). The mountain is shared with the Ski Mont Saint-Bruno ski resort, a quarry and a small Canadian Forces training camp. Despite its relatively small size, the mountain is known for its rich fauna and flora. Situated at the heart of the old signory of Montarville, its many lakes have permitted the construction and exploitation of many water mills, contributing to the region's economical success. A building from one of those mills, the "Vieux Moulin", still stands to this day and is used as a rest area for skiers and hikers in different seasons.

The most isolated major summits of Europe are located in the European subcontinent and its tectonic and geographic boundaries. This includes major mountain peaks of fold and fault-block mountains, and also volcanoes, located not only in the European Mainland, but also those located on lands and islands on the limits of Europe, like the North Atlantic Ocean islands of the Azores and Iceland, the Arctic Ocean islands of Jan Mayen, Svalbard archipelago and Novaya Zemlya archipelago, the Mediterranean island of Sicily, the Ural Mountains, and Mount Elbrus. The last mentioned is HP of the transboundary Caucasus Mountains and Greater Caucasus region, but as a geologically separate stratovolcano, it is entirely laying in Europe, 20 km (12 mi) north of the main ridge of the Greater Caucasus, considered as the one that is forming the limits of Europe. The definition excludes island clearly lying on the African Plate and outside the geographic limits of Europe, like the Canaries and Madeira. The active volcano of Mount Etna is somehow on, or just outside the boundaries of the Eurasian Plate, resting on the subduction boundary where the African tectonic plate is being pushed under the Eurasian plate, but geographically is part of Europe, and is also included in the Top 10 lists.

The Sautauriski mountain culminates at 727 metres (2,385 ft) in the southern part of Jacques-Cartier National Park, in the municipality of Stoneham-et-Tewkesbury, in the regional county municipality (MRC) of La Jacques-Cartier, in the administrative region of Capitale-Nationale, in Quebec, Canada.

The rivière du Mont Saint-Étienne is a tributary of the Sainte-Anne river, flowing on the north bank of the Saint Lawrence River, in the unorganized territory of Lac-Jacques-Cartier and the municipality of Saint-Ferréol-les-Neiges, in the La Côte-de-Beaupré Regional County Municipality, in the administrative region of Capitale-Nationale, in the province of Quebec, in Canada.

The Saint-Louis River is a tributary of the Valin River, flowing on the northwest shore of the Saint Lawrence River, in the unorganized territory of Mont-Valin and the municipality of Saint-David-de-Falardeau, in the Le Fjord-du-Saguenay Regional County Municipality, in the administrative region of Saguenay-Lac-Saint-Jean, in the Province of Quebec, in Canada.