Monte Carlo ( /ˌmɒntiˈkɑːrloʊ/ ; Italian:  [ˈmonte ˈkarlo] ; French : Monte-Carlo [mɔ̃te kaʁlo] , or colloquially Monte-Carl [mɔ̃te kaʁl] ; Ligurian : Munte Carlu [ˈmuŋte ˈkaɾlu] ; lit. '"Mount Charles"') is officially an administrative area of the Principality of Monaco, specifically the ward of Monte Carlo/Spélugues, where the Monte Carlo Casino is located. Informally, the name also refers to a larger district, the Monte Carlo Quarter (corresponding to the former municipality of Monte Carlo), which besides Monte Carlo/Spélugues also includes the wards of La Rousse/Saint Roman, Larvotto/Bas Moulins and Saint Michel. The permanent population of the ward of Monte Carlo is about 3,500, while that of the quarter is about 15,000. Monaco has four traditional quarters. From west to east they are: Fontvieille (the newest), Monaco-Ville (the oldest), La Condamine, and Monte Carlo.

Monte Carlo is situated on a prominent escarpment at the base of the Maritime Alps along the French Riviera. Near the quarter's western end is the "world-famous Place du Casino, the gambling center ... that has made Monte Carlo an international byword for the extravagant display and reckless dispersal of wealth". [1] It is also the location of the Hôtel de Paris, Café de Paris and Salle Garnier (the casino theatre which is the home of the Opéra de Monte-Carlo). The quarter's eastern part includes the community of Larvotto with Monaco's only public beach, as well as its new convention center (the Grimaldi Forum), and the Monte-Carlo Bay Hotel & Resort. At the quarter's eastern border, one crosses into the French town of Beausoleil (sometimes referred to as Monte-Carlo-Supérieur), and 8 kilometres (5 mi) to its east is the western border of Italy.

In 1856, Charles III of Monaco granted a concession to Napoleon Langlois and Albert Aubert, to establish a sea-bathing facility for the treatment of various diseases, and to build a German-style casino. [2]

The initial casino opened in La Condamine in 1862, but was unsuccessful. It relocated several times, before reaching its present location in the "Les Spélugues" (The Caves) area of Monte Carlo. Success came slowly, largely because Monaco was inaccessible from much of Europe. The railway, installed in 1868, brought with it an influx of people, and Monte Carlo grew in wealth. [2]

Saint-Charles Church on Monte Carlo's Avenue Sainte-Charles was completed in 1883. It was restored in its centenary year. [3] [4]

The municipality of Monte Carlo was created in 1911, when the Constitution divided the principality of Monaco into three municipalities. Monte Carlo encompassed the existing neighborhoods of La Rousse/Saint Roman, Larvotto/Bas Moulins, and Saint Michel. The municipalities merged in 1917, after accusations that the government used them to "divide and conquer". Since then, they are wards (quartiers). Today, Monaco is divided into 10 wards, with an eleventh planned (but currently postponed) to encompass land reclaimed from the sea (see the "Administrative divisions" section of Monaco for additional details).

The quarter of Monte Carlo was served by tramways from 1898 to 1931. It linked all parts of Monaco (see transportation in Monaco). In 2003 a new cruise ship pier was completed in the harbour at Monte Carlo.

Monte Carlo has an area of 28.14 hectares (or 0.28 square kilometers) and faces the Mediterranean Sea, bordered on the west by Moneghetti and La Condamine, on the north by Saint Michel and on the east by La Rousse and Larvotto.

Monte Carlo has a hot-summer Mediterranean climate (Köppen climate classification: Csa), which is influenced by oceanic climate and humid subtropical climate. As a result, it has warm, dry summers and mild, rainy winters. [5]

Monte Carlo is host to most of the Circuit de Monaco, on which the Formula One Monaco Grand Prix takes place. It also hosts world championship boxing bouts, the European Poker Tour Grand Final and the World Backgammon Championship as well as the Monaco International Auto Show (Fr: Salon International de l'Automobile de Monaco [9] ), fashion shows and other events. Although the Monte Carlo Masters tennis tournament is billed as taking place in the community, its actual location is in the adjacent French commune of Roquebrune-Cap-Martin. The Monte Carlo Rally is one of the longest running and most respected car rallies; from 1973 to 2008 and again from 2012, it marks the start of World Rally Championship season, having also served as the curtain-raiser for the Intercontinental Rally Challenge between 2009 and 2011. The rally, however, takes place outside the Monte Carlo quarter and is run mostly on French roads.

Monte Carlo has been visited by royalty as well as the public and movie stars for decades. Monte Carlo is one of Europe's leading tourist resorts, although many of the key tourist destinations are in other parts of Monaco, including such attractions as Monaco Cathedral, the Napoleon Museum, the Oceanographic Museum and aquarium, and the Prince's Palace, all of which are in Monaco-Ville.

The Opéra de Monte-Carlo or Salle Garnier was built to designs of the architect Charles Garnier, who also designed the Paris opera house now known as the Palais Garnier. Although much smaller, the Salle Garnier is very similar in style with decorations in red and gold, and frescoes and sculptures all around the auditorium. It was inaugurated on 25 January 1879 with a performance by Sarah Bernhardt dressed as a nymph. The first opera performed there was Robert Planquette's Le Chevalier Gaston on 8 February 1879, and that was followed by three more in the first season.

The Hôtel de Paris, established in 1864 by Charles III of Monaco, is located on the west side of the Place du Casino in the heart of Monte Carlo. It belongs to the Société des bains de mer de Monaco (SBM), and is part of the elite Palace Grand Hotels in Monaco with the Hotel Hermitage, the Monte-Carlo Beach Hotel, Monte-Carlo Bay Hotel & Resort, the Hotel Metropole and Fairmont hotel.

Additionally, there are 74 suites and junior suites which are grouped similarly, offering more luxury than the rooms. There are single and double suites as well as courtyard junior suites and Sea/Casino Junior suites. [10] There is also one Presidential suite. [11]

In October 2014, a renovation project began, to create a garden courtyard, add a new spa, fitness and pool area, exceptional suites, and a “rooftop villa” with a private garden and pool. [12]

Monte Carlo has been the setting of many films, books, television shows, and video games.

Monaco, officially the Principality of Monaco, is a sovereign city-state and microstate on the French Riviera a few kilometres west of the Italian region of Liguria, in Western Europe, on the Mediterranean Sea. It is bordered by France to the north, east and west. The principality is home to 38,682 residents, of whom 9,486 are Monégasque nationals; it is widely recognised as one of the most expensive and wealthiest places in the world. The official language of the principality is French. In addition, Monégasque, Italian and English are spoken and understood by many residents. 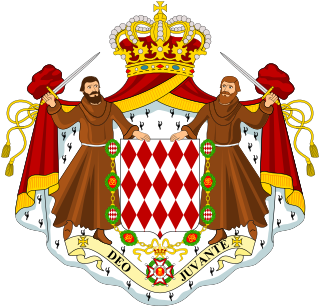 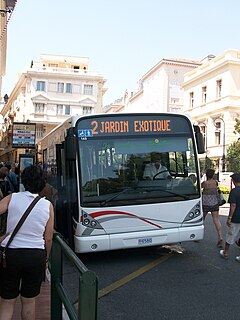 Transport in Monaco is facilitated with road, air (helicopter), rail, and water networks. Rail transport is operated by SNCF with only Monaco Monte Carlo station seeing passenger service and the total length of the line inside the Principality is 1.7 km (1.1 mi). Monaco has five bus routes operated by Compagnie des Autobus de Monaco. There are also two other bus routes which connect Monaco with neighboring regions such as Nice and Menton. 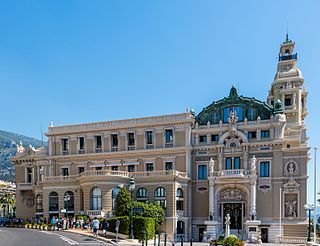 The Opéra de Monte-Carlo is an opera house which is part of the Monte Carlo Casino located in the Principality of Monaco.

La Condamine is the central ward in the Principality of Monaco. Its landmarks include Port Hercules, the Rainier III Nautical Stadium, and the Princess Antoinette Park. Its farmer's market at the Place d'Armes dates from 1880 and is a great source of local pride for its "authentic Monegasque" essence. 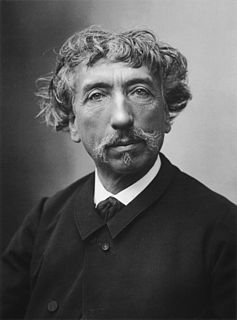 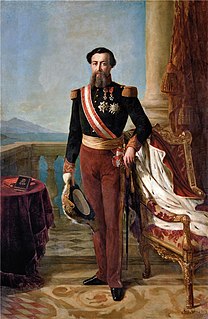 Charles III was Prince of Monaco and Duke of Valentinois from 20 June 1856 to his death. He was the founder of the famous casino in Monte Carlo, as his title in Monegasque and Italian was Carlo III. He was born in Paris, the only son of Florestan, Prince of Monaco, and Maria Caroline Gibert de Lametz.

La Rousse, also formerly known as La Rousse-Saint Roman, is the northernmost ward in the Principality of Monaco. La Rousse is incorporated in the traditional quarter of Monte Carlo. Since 2018, it is home to a police station near the border with France. 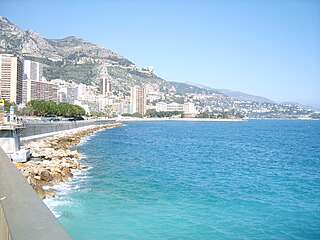 Larvotto is the easternmost ward in the Principality of Monaco. It is part of the quarter of Monte Carlo. It has an estimated surface area of 21 hectares and access to the Mediterranean Sea. In 2008, it had a population of 5,443, making it the most populated ward in Monaco.

The Hôtel de Paris Monte-Carlo is a hotel located in Monaco. It was opened in 1864 as part of the development of Monaco by the Société des bains de mer de Monaco. It has undergone a $280 million and more than four years complete renovation and reopened in March 2019. 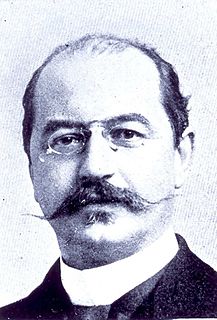 Léon Jehin was a conductor and composer, especially associated with the opera house in Monte Carlo. He composed the national anthem of Monaco.

The Hôtel Hermitage Monte-Carlo is a palace style Belle Époque in the heart of Monaco on the French Riviera. It belongs to the Société des bains de mer de Monaco. It was built in 1890 and 1896 the architect Nicolas Marquet with the participation of Gustave Eiffel.

The Monte-Carlo Bay Hotel & Resort is a resort located in the neighborhood of Larvotto, Monaco. The hotel is part of the Société des bains de mer de Monaco.

The Avenue Princesse Grace is an avenue in the Larvotto ward of Monaco. It is named after Grace Kelly, Princess consort of Monaco. It is the most expensive street in the world according to Engel & Völkers. In other words, property along this street is on average worth $17,750 per square foot and each square metre £73,000. 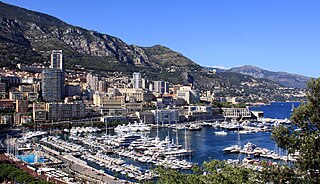 Monaco is known for its wide range of architecture for a small country. The geography of Monaco, which consists of sharp hills and narrow coastline, influences the Monacan architecture. The narrow roads have led to architectural construction being built into the hills in limited amounts of space. This limited space has, more recently, the issue of construction in Monaco has created social disruption.

Marie Charlotte Blanc was a German socialite and businesswoman. She was a prominent member of high society in Monaco and France. After the death of her husband, François Blanc, she operated the Monte Carlo Casino.

The Café de Paris is a coffeehouse and restaurant in the Belle Époque style of the 1900s, located in Monte Carlo and next to the Casino de Monte-Carlo, on the Place du Casino, facing the Hôtel de Paris. It is owned and managed by the Société des bains de mer de Monaco.

Wikivoyage has a travel guide for Monte Carlo .
This page is based on this Wikipedia article
Text is available under the CC BY-SA 4.0 license; additional terms may apply.
Images, videos and audio are available under their respective licenses.