The Montelupich prison, so called from the street in which it is located, the ulica Montelupich ("street of the Montelupi family"), [note 1] is a historic prison in Kraków from early 20th century, which was used by the Gestapo in World War II. It is universally recognized as "one of the most terrible Nazi prisons in [occupied] Poland". [1] The Gestapo took over the facility from the German Sicherheitspolizei at the end of March 1941. One of the Nazi officials responsible for overseeing the Montelupich Prison was Ludwig Hahn. [2]

World War II prisoners at Montelupich were made up predominantly of the ethnically Polish political prisoners and victims of the Gestapo street raids, but also German members of the SS and Security Service (SD) who had been sentenced to jail terms, British and Soviet spies and parachutists, soldiers who had deserted the Waffen-SS, and regular convicts. The number of political prisoners who passed through or ended their lives in the Montelupich in the years 1940–1944 is estimated at 50,000. [3] Kurkiewiczowa (see Bibliography) states that "medieval tortures" constituted the fundamental and principal interrogation method of the Germans.

Although the inscription on the plaque by the (side) door of the prison in the 1939 photograph pictured at right actually reads, "Sicherheits-Polizei-Gefängnis Montelupich", the name "Montelupich Prison" is strictly informal, based on common popular convention, even if it has now passed in that form into history. The Montelupich facility was the detention centre of the first instance used by the Nazis to imprison the Polish professors from the Jagiellonian University arrested in 1939 in the so-called Sonderaktion Krakau , an operation designed to eliminate Polish intelligentsia. In January 1944, 232 prisoners from Montelupich were executed by a Nazi firing squad at Pełkinie. [4] In late January or early February 1944, Wilhelm Koppe issued an order for the execution of 100 Montelupich prisoners as a reprisal for the unsuccessful attempt on the life of Hans Frank. [5] In the locality called Wola Filipowska near Kraków there is a monument commemorating the execution by the Nazis of 42 hostages, all Montelupich prisoners who died on the spot before a firing squad on 23 November 1943.

After World War II, Montelupich became a Soviet prison where NKVD and Urząd Bezpieczeństwa tortured and murdered Polish soldiers of the Home Army. At present, the building serves as a temporary arrest and detention facility for men and women, with 158 jail cells and a prison hospital with additional 22 cells. [6]

History of the property

The building housing the prison was not originally constructed for its purpose, but instead, was a historical property that was redecorated in the Italianate Renaissance style in 1556 by the Italian Montelupi family who introduced the first postal service in Poland for the court of Sigismund III Vasa. [7] Their Kraków manor house, known in Polish as the Kamienica Montelupich (Palazzo Montelupi in Italian), at Number 7 of the street to which it gave the name, was the starting point of the first international postal coach in Poland which departed from here for Venice in 1558. [8] The Jalu Kurek Park (see Park Jalu Kurka ) in Krakow was formerly the palace garden of the palazzo Montelupi.

The prison was the site of the last administration of the death penalty in Poland, performed by hanging on 21 April 1988. [9]

Despite being officially recognized as both a historical monument and a place of martyrdom, the facility continues to be operated to this day as a combination of remand prison and ordinary correctional facility by the Polish Prison Administration (the Służba Więzienna), a unit of the Polish Justice Ministry. Its current official name is Areszt Śledczy w Krakowie. The infamous history of this facility continues to the present day, as evident in the 2008 death of the Romanian detainee, Claudiu Crulic (1975–2008; see Claudiu Crulic), an incident condemned by human rights groups (such as the Human Rights House Foundation of Oslo, Norway) which occasioned the resignation of the Romanian Foreign Affairs Minister, Adrian Cioroianu. [10]

Vincent A. Lapomarda writes in his book on the Nazi terror that

On inquiring about Montelupich, on Montelupi Street, when I was in Krakow on 18 August 1986, I was able to view it from outside and learned that even today, while still operating, it has not lost the evil reputation that it had during the Nazi occupation. [11]

Nazi war criminals executed at Montelupich after the War

On 24 January 1948, twenty-one Nazi German war criminals, including two women, were hanged at the Montelupich Prison as a result of the death sentences handed down in the First Auschwitz Trial. Their names are listed below along with the names of the Nazi war criminals executed at Montelupich at other dates. 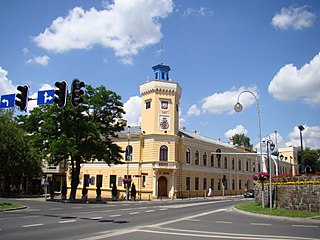 Radomskopronounced [raˈdɔmskɔ] is a town in south-central Poland with 45,843 inhabitants (2019). It is situated on the Radomka river in the Łódź Voivodeship, having previously been in Piotrków Trybunalski Voivodeship (1975–1998). It is the county seat of Radomsko county. 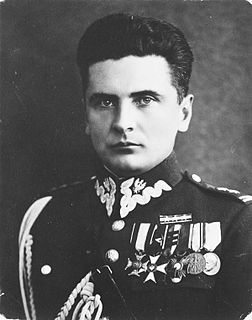 Józef Adam Zygmunt Cyrankiewicz was a Polish Socialist (PPS) and after 1948 Communist politician. He served as premier of the People's Republic of Poland between 1947 and 1952, and again for 16 years between 1954 and 1970. He also served as Chairman of the Polish Council of State from 1970 to 1972. The Kotwica was a World War II emblem of the Polish Underground State and Armia Krajowa. It was created in 1942 by members of the AK Wawer Minor sabotage unit, as an easily usable emblem for the Polish struggle to regain independence. The initial meaning of the initials PW was Pomścimy Wawer. This was a reference to the Wawer massacre, which was considered to be one of the first large scale massacres of Polish civilians by German troops in occupied Poland.

Stanisław Tatarnom de guerre "Stanisław Tabor" was a Polish Army colonel in the interwar period and, during World War II, one of the commanders of Armia Krajowa, Polish resistance movement. He was appointed brigade general in 1943 and half-a-year later flew from occupied Poland to London. 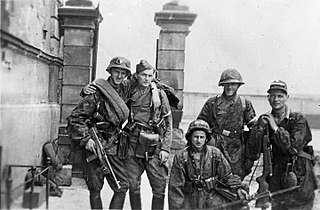 The Polish resistance movement in World War II, with the Polish Home Army at its forefront, was the largest underground resistance movement in all of occupied Europe, covering both German and Soviet zones of occupation. The Polish resistance is most notable for disrupting German supply lines to the Eastern Front, providing intelligence reports to the British intelligence agencies, and for saving more Jewish lives in the Holocaust than any other Western Allied organization or government. It was a part of the Polish Underground State. 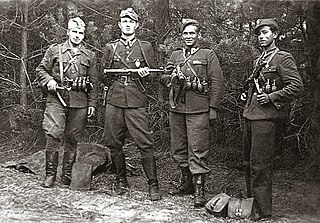 The "cursed soldiers" or "indomitable soldiers" is a term applied to a variety of anti-Soviet and anti-communist Polish resistance movements formed in the later stages of World War II and its aftermath by members of the Polish Underground State. The clandestine organisations continued their armed struggle against the communist regime of Poland well into the 1950s. The guerrilla warfare included an array of military attacks launched against the regime's prisons and state security offices, detention facilities for political prisoners, and concentration camps that were set up across the country. Most of the Polish anti-communist groups ceased to exist in the late 1950s, as they were hunted down by agents of the Ministry of Public Security and Soviet NKVD. The last known "cursed soldier", Józef Franczak, was killed in an ambush in 1963.

Organizacja Wojskowa Związek Jaszczurczy was an organization of Polish resistance in World War II. Created in 1939 and transformed into National Armed Forces in 1942, it represented the far right of the Polish political spectrum and so refused to recognise the internationally-recognised Polish Underground State although there was some uneasy tactical cooperation for practical reasons. It also refused to recognise the Soviet-aligned Polish Committee of National Liberation and continued to resist the new Polish communist regime after the war.

The anti-communist resistance in Poland, also referred to as the Polish anti-Communist insurrection fought between 1944 and 1953, was an armed struggle by the Polish Underground against the Soviet takeover of Poland at the end of World War II in Europe. The guerrilla warfare conducted by the resistance movement formed during the war, included an array of military attacks launched against Communist prisons, state security offices, detention facilities for political prisoners, and prison camps set up across the country by the Stalinist authorities.

Narcyz Wiatr was a Polish political activist, member of the agrarian Polish People's Party (SL), a prisoner at the Bereza Kartuska prison and during World War II a leader of Peasants' Battalions (BCh) an anti-Nazi underground resistance movement, with the rank of colonel,.

Kazimierz Piechowski was a Polish engineer, a Boy Scout during the Second Polish Republic, a political prisoner of the German Nazis at Auschwitz concentration camp, a soldier of the Polish Home Army then a prisoner for seven years of the post war communist government of Poland. 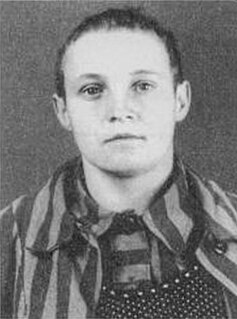 Jadwiga Apostoł-Staniszewska was a Polish teacher in the interwar period, an underground activist during World War II, and a writer in postwar Poland. 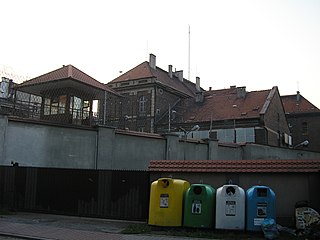 The Kraków-Podgórze Detention Centre is a correctional facility located at ul. Stefana Czarnieckiego 3 in Kraków, Poland, in the municipal district of Podgórze. Originally, it was a turn-of-the-century county court and revenue service, built in 1905, from design by Ferdynand Liebling. At present, it is a community branch of Detention Centre Kraków, with main building located at ul. Montelupich 7 street. The Kraków-Podgórze Detention Centre specializes in drug-and-alcohol-addiction therapy and serves also as a temporary arrest facility. It was created in 1971 as a prison for men with the holding capacity of 207. It was made into a detention facility in 1990. There's a medical clinic and a dentist on-site. Prisoners who completed the recovery program work with mentally and physically disabled clients.

Wiktor Tołkin was a Polish sculptor and architect. A member of the Armia Krajowa resistance during World War II; he was arrested by the Gestapo, and incarcerated at Auschwitz from November 17, 1942 to February 1944. During this period Tołkin survived a death march to Stalag at Sandbostel.

Kazimierz Wojciechowski was a Polish Roman Catholic clergyman, member of the religious institute of the Salesians of Don Bosco involved in the education of the youth, who after the Nazi invasion of Poland was arrested by the Gestapo, imprisoned at Montelupich, and subsequently deported to the Auschwitz concentration camp where he was murdered by two prisoner functionaries the day after arrival.

Kazimierz Dembowski was a Polish Roman Catholic clergyman and member of the Society of Jesus involved in the religious publishing industry, who shortly after the German invasion of Poland was arrested by the Gestapo, imprisoned at several places of detention, and lastly deported to the Dachau concentration camp where he was murdered in a gas chamber. He is among 122 Polish martyrs whose beatification process was advanced in 2003.

Józef Cyrek was a Polish writer and Roman Catholic clergyman, member of the Society of Jesus involved in the religious publishing industry, who shortly after the Nazi invasion of Poland was arrested by the Gestapo, imprisoned at several places of detention, and lastly deported to the Auschwitz concentration camp where he was murdered.

Józef Kowalski was a Polish Roman Catholic priest from the Salesian Society killed at the Auschwitz concentration camp during World War II. He was beatified in Warsaw on June 13, 1999. 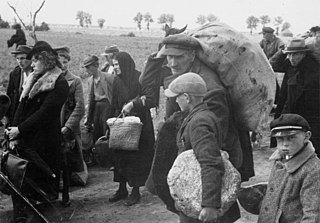 The occupation of Poland by Nazi Germany and the Soviet Union during World War II (1939–1945) began with the German-Soviet invasion of Poland in September 1939, and it was formally concluded with the defeat of Germany by the Allies in May 1945. Throughout the entire course of the occupation, the territory of Poland was divided between Nazi Germany and the Soviet Union (USSR) both of which intended to eradicate Poland's culture and subjugate its people. In the summer-autumn of 1941, the lands which were annexed by the Soviets were overrun by Germany in the course of the initially successful German attack on the USSR. After a few years of fighting, the Red Army drove the German forces out of the USSR and crossed into Poland from the rest of Central and Eastern Europe.