Regional leagues as a lowest-tier competition in Montenegro, were founded in 1968. The format and system of competition has not changed. From 1968 to 2006, it was the fourth or fifth level of competition in SFR Yugoslavia, FR Yugoslavia and Serbia and Montenegro. Following Montenegrin independence (2006), regional leagues became the third tier in the organisation of domestic football competitions. From 1968 until now, the league is divided on three regions - North (clubs from territories of Berane, Bijelo Polje, Gusinje, Mojkovac, Petnjica, Plav, Pljevlja, Rožaje and Žabljak) Center (Podgorica with Golubovci and Tuzi, Danilovgrad, Kolašin, Nikšić, Plužine and Šavnik) and South (Bar, Budva, Cetinje, Herceg Novi, Kotor, Tivat and Ulcinj). At period 1961–2006, winners of three regional leagues were promoted to Montenegrin Republic League (3rd tier) or played Montenegrin football playoffs.

After independence of Montenegro, regional leagues, with the same format and divisions, became Third League, and also a lowest tier of competition. At the end of season, champions of each region qualifies for the playoff. Every season, two top teams from playoff are qualified for the Second League. Below is the list of Montenegrin Third League champions.

Full list of champions of regional leagues before 2006, is available on the page Montenegrin clubs in Yugoslav football competitions (1946-2006).

From 2006, 56 different teams played in Montenegrin Third League. This is the complete list of the clubs that took part in 15 seasons played from 2006-07 to 2020-21, ranked by champion titles won in the Third League.

Following the Montenegrin independence, from the season 2006/07, champions of three regional leagues are participating in the playoffs for Montenegrin Second League promotion. Until 2020, every team is played four matches, and at the end, best-placed are promoted to a higher rank. From 2020, every team is playing two games, and if there is no winner after 90 minutes, penalties are deciding about it. Two teams are gaining promotion to the Second League. Playoffs are playing after the regular season, at the end of May and start of June every year.

During the history, most promotions to Montenegrin Second League gained teams from Central and South region. Representatives of that regions gained promotions via playyofs 10 times. Clubs from North region gained 8 promotions through playoffs.

For the 2020-21 season, Third league is divided in three geographical regions. Eight teams compete in the North, thirteen in the Center, and nine in the South. The Third League - Center is organised by Union of the clubs - Center (Montenegrin: Udruženje klubova - Centar - FSCG). [7] The Central region covers approximately 70% of Montenegrin territory. The municipalities within Central region include: Podgorica, Nikšić, Danilovgrad, Šavnik, Plužine and Kolašin, and Tuzi.

There are 13 clubs competing in Montenegrin Third League - Center during the season 2020-21.

During the season 2020-21, there are nine clubs competing in the South region.

Fudbalski klub Zora is a Montenegrin football club based in Spuž, Danilovgrad Municipality. They currently compete in the Montenegrin Third League.

FK Cetinje is a Montenegrin football club based in Cetinje. They currently compete in the Montenegrin Second League.

FK Grafičar is a Montenegrin football club based in Podgorica. The club was founded in 1948 and during the season 2016-17 was relegated from Montenegrin Second League.

Fudbalski klub Ribnica is a football club from Konik, Podgorica, Montenegro. They currently compete in the Montenegrin Third League - Center.

FK Otrant-Olympic is a Montenegrin football club based in the coastal town of Ulcinj. They compete in the Montenegrin Third League-South.

The Montenegrin Cup is the national football cup played in Montenegro, established in 2006. The winner of the cup is awarded a spot in the second qualifying round of the UEFA Europa League if they have not already gained a spot in the UEFA Champions League.
Most successful participant until now was FK Rudar with four titles, followed by FK Budućnost with three and OFK Titograd who won it twice.

The 2011–12 Montenegrin Second League was the sixth season of the competition as the second top football league in Montenegro. The league played its first games of the season on August 14, 2011 and its final matches were played on May 30, 2012. 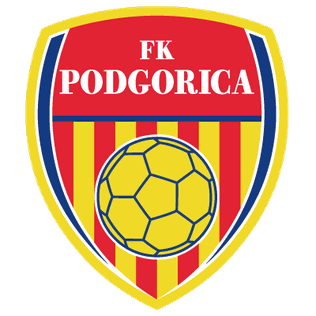 Fudbalski klub Podgorica, formerly known as OFK Mladost 1970, is a football club from the southwestern part of Podgorica, Montenegro. It was founded in 1970, the club was reactivated during 2014. In the summer 2019, the club was renamed to FK Podgorica.

The 2015–16 Montenegrin Cup is the 10 season of the Montenegrin knockout football tournament. The winner of the tournament received a berth in the first qualifying round of the 2016–17 UEFA Europa League. The defending champions are Mladost, who beat Petrovac in the final of the last competition. The competition will feature 30 teams. It started on 16 September 2015 and ended with the final on 2 June 2016.

The 2009–10 Montenegrin Second League was the fourth season since its establishment.

The 2017–18 Montenegrin Cup was the 11th season of the knockout football tournament in Montenegro. This competition began on 23 August 2017 and ended on 30 May 2018. The winners of the competition earned a spot in the 2018–19 UEFA Europa League.

The 2019–20 Montenegrin Cup was the 14th year of the knockout football tournament in Montenegro. The cup began on 28 August 2019, but wasn't finished due to the coronavirus pandemic.

Omladinski fudbalski klub Mladost DG is a football club from the southwestern part of Podgorica, Montenegro. It was founded in 2019, they currently compete in Montenegrin Second League.