The Monumento a los caídos en Malvinas (transl. Monument to the Fallen in the Falklands) is a cenotaph in Plaza San Martín, in Buenos Aires, dedicated to the 649 Argentine soldiers who were killed in the Falklands War. The inscription reads La nación también rinde homenaje a los que guardan en su cuerpo o memoria las huellas del combate. (transl. The nation honors also those who keep traces of the struggle on their bodies or in their memories.)

Retiro is a barrio (district) in Buenos Aires, Argentina. Located in the northeast end of the city, Retiro is bordered on the south by the Puerto Madero and San Nicolás barrios, and on the west by the Recoleta barrio.

San Martín Palace is located facing Plaza San Martín in the Retiro neighbourhood of Buenos Aires, Argentina and serves as the Ceremonial Headquarters for the Ministry of Foreign Relations.

Buenos Aires is a former passenger railway station in the city of Buenos Aires, Argentina. The station was terminus of the Belgrano Sur line that runs trains along Greater Buenos Aires region.

Parque San Martín is a city located in Merlo Partido, Buenos Aires Province, Argentina. Parque San Martín was founded around 1948 by real estate promoters, in the estates belonging to the Etcheverry family. Like many others places in Argentina, the city was named after the Argentine independence hero General José de San Martín.

Saavedra is a barrio (neighbourhood) of Buenos Aires, Argentina. It is located in the Northern end of the city, close to Belgrano and Villa Urquiza. Its northern border is Avenida General Paz. Among the main features of the neighbourhood is the Parque Saavedra, which has large picnic areas and sports facilities. Many inhabitants of Buenos Aires pass through Saavedra en route to their weekends in the country.

Plaza de la República is a city square in Buenos Aires, capital of Argentina. It is located in the San Nicolás quarter, at the intersection of the city's three main arteries: Ninth of July Avenue, Corrientes Avenue, and Diagonal Norte. It derives its name and associations from a church once sited on the square, San Nicolás de Bari, where the country's national flag was hoisted for the first time. 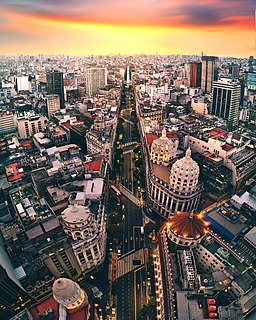 Avenida Roque Sáenz Peña, better known as Diagonal Norte, is an important avenue in the San Nicolás neighborhood of Buenos Aires, Argentina. It is oriented south-east/north-west, diagonally bisecting the city blocks (manzanas) which give the city centre a checkerboard plan. It is named after President Roque Sáenz Peña, who held power from 1910 to 1914 and passed the law which established universal suffrage, secret ballot and an electoral register.

Torre Monumental and before 1982 Torre de los Ingleses is a clock tower located in the barrio (district) of Retiro, Buenos Aires, Argentina. It is situated in the Plaza Fuerza Aérea Argentina next to the Calle San Martín and Avenida del Libertador. It was a gift from the local British community to the city in commemoration of the centennial of the May Revolution of 1810. 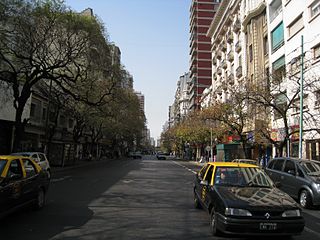 Avenida Rivadavia is one of the principal thoroughfares in Buenos Aires, Argentina, extending 23 miles (37 km) from downtown Buenos Aires to the western suburb of Merlo.

Avenida del Libertador is one of the principal thoroughfares in Buenos Aires, Argentina, and in points north, extending 25 km (16 mi) from the Retiro District of Buenos Aires to the northern suburb of San Fernando. 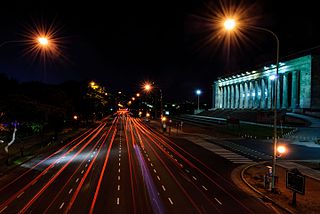 Avenida Figueroa Alcorta is a major thoroughfare in Buenos Aires, Argentina, with a length of over 7 km (4.3 mi) along the city's northside.

The San Martín National Institute is a cultural foundation in Buenos Aires dedicated to the legacy of General José de San Martín, the Liberator of Argentina, Chile, and Perú.

Pitt Point is a promontory, 90 m high, at the south side of the mouth of Victory Glacier on the south coast of Trinity Peninsula, forming the northeast side of the entrance to Chudomir Cove. The promontory was charted by the Falkland Islands Dependencies Survey (FIDS) in 1945, and named for K.A.J. Pitt, master of the 1944-45.

The Museo de Arte Hispanoamericano Isaac Fernández Blanco is a museum of art located in the Retiro ward of Buenos Aires, Argentina. 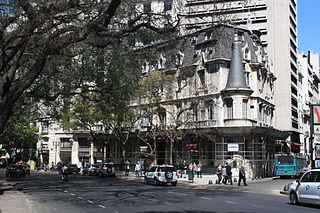 The Palacio Haedo is a 19th-century building on the Avenida Santa Fe in Buenos Aires, Argentina. It is located to the south of the Torre de Los Ingleses and the Plaza San Martín and Monument del libertador Jose de Plaza San Martín, in close proximity to the Consulate of Colombia and the Gran Hotel Buenos Aires. It was built in the late 19th century as a residence for the Haedo family by architects Passeroni and Brizuela in the Neo-Gothic style. 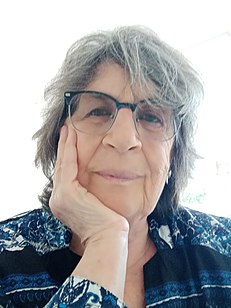 Sonia Berjman is a Doctor of Art History and also Philosophy and Letters. A protector of parks, squares, and statues of the city of Buenos Aires, she is one of the media's main references for these issues.