Last updated April 01, 2020
This article is about the city. For other uses, see Moquegua (disambiguation).
City in Peru

Moquegua (Spanish pronunciation:  [moˈkeɣwa] , founded by the Spanish colonists as Villa de Santa Catalina de Guadalcázar del Valle de Moquegua) is a city in southern Peru, located in the Department of Moquegua, of which it is the capital. It is also capital of Mariscal Nieto Province and Moquegua District. It is located 1144 kilometers south of the capital city of Lima.

This region was occupied for thousands of years by successive cultures of indigenous peoples. The Wari culture built numerous monuments, and developed terraced fields to support crop cultivation on hillsides hundreds of years before the Inca conquered them and expanded their territory into this area. Cerro Baúl is the remains of a Wari monumental site, on top of a hill outside of Moquegua.

Numerous Tiwanaku sites are also in the area. It was an important colonial center for the Tiwanaku state. The valley is the only area of Peru to house both Wari and Tiwanaku ruins.

The Chiribaya culture flourished in the Moquegua area and near the Pacific island coast from about 1000 until 1360.

According to Inca Garcilaso de la Vega, the Inca Emperor Mayta Cápac organized the military expedition that extended the Inca domains to the shore of the Pacific. They overcame other indigenous peoples in the 15th century; in the next century they were conquered by the Spanish.

There is no definite information about the year of the city's founding by the Spanish. Tradition holds that the colonial city was founded on 25 November 1541, by Pedro Cansino and his wife Josefina de Bilbao.

This city is located in the mountains of the region of the same name. It has many gardens and other tourist attractions, which make it a popular destination in Peru.

The Plaza de Armas, is the Main Square and center of the city. It was designed in the 19th century by the French architect, Gustave Eiffel, who designed the Eiffel Tower in Paris. In this main square the Jose Carlos Mariategui Museum and the Contisuyo Museum, are located.

The Casa del Regidor Perpetuo de la Ciudad, is a house built in the 18th century. It has a front of carved stone. Operated as a house museum, it is furnished with high quality antiques.

The district of Torata, located 24 km away from the city, has traditional houses with mojinete roofs. The parish church has beautiful wood carvings.

The Pan-American Highway passes through the city.

Moquegua's economy is largely based on mining. Resources include copper, silver, gold and molybdenum. Cuajone and part of Toquepala Mine are located in the Mcal. Nieto Province. A copper smelter and refinery to treat copper concentrates from those mines is located in Ilo province.

Nazca is a city and system of valleys on the southern coast of Peru. It is also the name of the largest existing town in the Nazca Province. The name is derived from the Nazca culture that flourished in the area between 100 BCE and 800 CE. This culture was responsible for the Nazca Lines and the ceremonial city of Cahuachi; they also constructed an impressive system of underground aqueducts, named Puquios, that still function today. 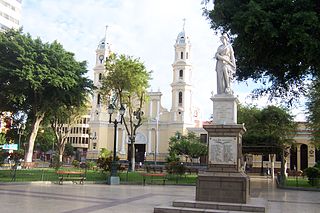 Piura is city in northwestern Peru located in the Sechura Desert on the Piura River. It is the capital of the Piura Region and the Piura Province. Its population was 484,475 as of 2017. 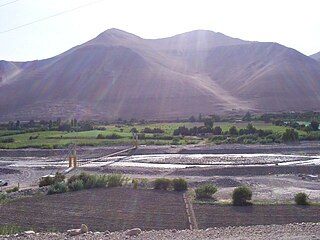 Moquegua is a department in southern Peru that extends from the coast to the highlands. Its capital is the city of Moquegua, which is among the main Peruvian cities for its high rates of GDP and national education.

Ica is the capital of the Department of Ica in southern Peru. While the area was long inhabited by varying cultures of indigenous peoples, the Spanish conquistador Jerónimo Luis de Cabrera claimed its founding in 1563. As of the 2017 census, it had a population of over 282,407. The city suffered extensive damage and loss of life during the 2007 Peru earthquake. 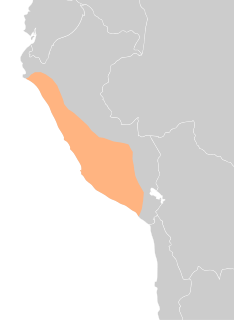 The Wari were a Middle Horizon civilization that flourished in the south-central Andes and coastal area of modern-day Peru, from about 500 to 1000 AD.

Huancayo is the capital of Junín Region, in the central highlands of Peru.

Ilo is a port city in southern Peru, with 66,118 inhabitants. It is the second largest city in the Moquegua Region and capital of the Ilo Province.

Talara is a city in the Talara Province of the Piura Region, in northwestern Peru. It is a port city on the Pacific Ocean with a population of 91,444 as of 2017. Its climate is hot and dry. Due to its oil reserves, and ability to produce aviation fuel, Talara hosted a United States air base during World War II. Talara is also home to a large fishing fleet. The city is served by the Cap. FAP Víctor Montes Arias Airport. 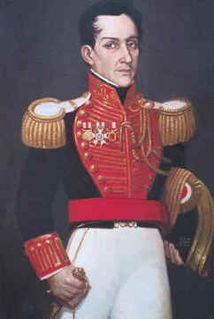 Domingo Nieto was a Peruvian Grand Marshal, forefather of the nation, and politician who served as the 19th President of Peru between 1843 and 1844, officially as the President of the Government Junta and Grand Marshal of Peru.

Andahuaylas is a Peruvian city. It is the capital of the Andahuaylas Province in the Apurímac Region. It is known as the pradera de los celajes. Its approximate population of 42,268 inhabitants makes it the first largest city in the region.

Huamachuco is a town in northern Peru and capital of the province Sánchez Carrión in La Libertad Region. The city is the seat of the Territorial Prelature of Huamachuco. Lake Sausacocha lies to the northeast.

The Andean civilizations were complex societies of many cultures and peoples mainly developed in the river valleys of the coastal deserts of Peru. They stretched from the Andes of Ecuador southward down the Andes to northern Argentina and Chile. Archaeologists believe that Andean civilizations first developed on the narrow coastal plain of the Pacific Ocean. The Caral or Norte Chico civilization of Peru is the oldest civilization in the Americas, dating back to 3200 BCE.

Chancay is a small city located 78 km (48 mi) north of Lima. Its population is 63,378. The Chancay culture was a Pre-Columbian archeological culture, later part of the Inca Empire.

Moche is a Peruvian city, the capital of Moche District in Trujillo Province of La Libertad Region in northern Peru. It is located in the Moche Valley and was the center of development of the ancient Moche or Mochica culture. Now it is a major tourist destination of the Moche Route tourist circuit and It is part of the integrated area of Trujillo city.

Osmore River system flows northeast to southwest in the Moquegua Region of southern coastal Peru. The river has its origin in the snow peaks of the Chuqi Ananta and Arundane mountains, at an elevation of 5,100 metres (16,700 ft). It changes names as it descends from the Andes: From its origin it is called the Moquegua, then Osmore in the middle valley as Rio Coscori and Rio Tumilaca including where the river disappears into subterranean channels, and further down in the lower reaches as Rio Ilo. 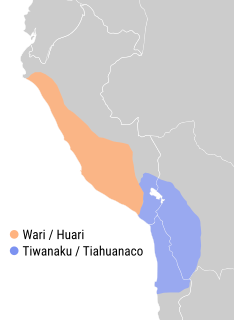 The Tiwanaku state was a Pre-Columbian polity in western Bolivia based in the southern Lake Titicaca Basin. Tiwanaku was one of the most significant Andean civilizations. Its influence extended into present-day Peru and Chile and lasted from around 550 to 1000 AD. Its capital was the monumental city of Tiwanaku, located at the center of the state's core area in the southern Lake Titicaca Basin. This area has clear evidence for large-scale agricultural production on raised fields that probably supported the urban population of the capital. Researchers debate whether these fields were administered by a bureaucratic state (top-down) or through collaboration of a segmented state or federation with local autonomy. One obsolete theory suggests that Tiwanaku was an expansive military empire, based on comparisons to the later Inca Empire, but supporting evidence is weak.

Cerro Baúl is an ancient political outpost and ceremonial center settlement in Peru established by the pre-Incan empire called the Wari. Cerro Baúl is a terraced mountain, 2000 feet above its surroundings, with a settlement on the cliff tops themselves and in the immediate surroundings. Among other finds are the remnants of a brewery and large buildings that may have been used for ceremonial feasting. There is evidence of damage that has been interpreted as a careful and deliberate destruction, by the city's own people, of several buildings prior to the mesa's being vacated.