Preliminary assessments and feasibility studies of the hydroelectric dam and power station began on 24 September 2012, [3] with an estimated commissioning date in 2021. [2] The dam is planned to impound the Mahaweli River at Weliganga and have five spillways, [1] with the powerhouse located approximately 500 m (1,600 ft) from the tailrace discharge of the Kotmale Power Station. [4]

The construction of the Moragolla Dam and underground penstocks posed significant threats to the endangered green labeo fish species in the project site. This has caused many delays and added cost to the development of the hydropower facility. [1]

Moragolla is the last major Hydro Power Plant in Mahaweli Ganga Hydro Power Scheme. The project site is located on the upper reaches of the Mahaweli Ganga in the Central Highlands, approximately 22 km south of Kandy City close to the village of Ulapane in the Kandy district and about 130 km North-East of Colombo.

Tarbela Dam is an earth-filled dam along the Indus River in Pakistan's Khyber Pakhtunkhwa province. Located in the Swabi mainly and in some area of Haripur District of the province, The dam is about 30 km (20 mi) from the city of Swabi, 105 km (65 mi) northwest of Islamabad, and 125 km (80 mi) east of Peshawar. It is the largest earth-filled dam in the world. The dam is 143 metres (470 ft) high above the riverbed and its reservoir, Tarbela Lake, has a surface area of approximately 250 square kilometres (97 sq mi).

Victoria Dam is an arch dam located 130 mi (209 km) upstream of the Mahaweli River's mouth and 4 mi (6 km) from Teldeniya. It is named in honor of Queen Victoria.

The Yeywa Hydropower Station, located on the Myitnge River, 52 kilometres (32 mi) southeast of Mandalay city, at Yeywa village in Kyaukse Township, Mandalay Region in central Myanmar, is the country's first roller-compacted concrete (RCC) dam, and the site of a 790-megawatt (1,060,000 hp) hydroelectric power plant, the largest in the country.

Irganai Dam is a hydroelectric dam in the Untskul region of Dagestan, Russia. It is located on the river Avar Koisu.

Moragolla is a village in Sri Lanka. It is located within Central Province. 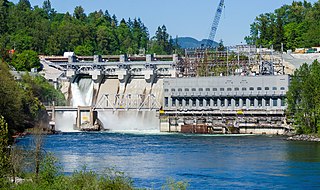 Ruskin Dam is a concrete gravity dam on the Stave River in Ruskin, British Columbia, Canada. The dam was completed in 1930 for the primary purpose of hydroelectric power generation. The dam created Hayward Lake, which supplies water to a 105 MW powerhouse and flooded the Stave's former lower canyon, which ended in a small waterfall approximately where the dam is today.

Denis-Perron dam is a rockfill embankment dam spanning the Sainte-Marguerite River, a tributary of the lower Saint Lawrence River, in eastern Quebec, Canada. Standing 171 metres (561 ft) high and 378 metres (1,240 ft) long, the dam is the primary component of Hydro-Québec's Sainte-Marguerite 3 hydroelectric project. The dam is the second highest in Quebec and the hydraulic head afforded to its power plant is also the largest in the province.