Morgan Gardner Bulkeley (December 26, 1837 – November 6, 1922) was an American politician, businessman, and sports executive. A Republican, he served in the American Civil War, and became a Hartford bank president before becoming the third president of the Aetna Life Insurance Company, a post he held for 43 years. He was elected to the National Baseball Hall of Fame in recognition of his role as the first president of the National League. Bulkeley served on the Hartford City Council and was a four-term mayor of Hartford. He later served as the 54th Governor of Connecticut for two terms and as a United States Senator.

Bulkeley was born in East Haddam, Connecticut to an old local family. His father, State Senator Eliphalet Adams Bulkeley, was a descendant of the Reverend Peter Bulkeley, eight generations removed. Peter Bulkeley was the founder of Concord Massachusetts and sailed to North America from England on the ship Susan & Ellen in May 1635. Morgan Bulkeley's mother, Lydia Smith (Morgan), descended from passengers of the Mayflower more than 200 years prior. [1]

The Bulkeleys had called nearby Colchester, Connecticut their home and until Morgan's death always believed it as such.[ citation needed ] He was also related to the well known Morgan family through his mother.[ citation needed ] He was educated at Bacon Academy in Colchester just like his father and his cousins on both sides.[ citation needed ] In 1846, the Bulkeley family moved to Hartford, Connecticut. [2] Morgan's father, Eliphalet Adams Bulkeley, was prominent in the Connecticut Republican Party and helped found the Aetna Life Insurance Company, becoming its first president in 1853. [3] [4] He was also a descendant of the third President of Harvard University, Charles Chauncy. [2] Morgan Bulkeley attended Hartford Public High School and, at age 14, started working at the Aetna sweeping floors for a dollar a day [1] [3] along with his brother, Charles. [5]

Bulkeley left Hartford to work for his uncle's company, H. P. Morgan & Company, in Brooklyn, New York. He was an errand boy in Brooklyn in 1852 and later worked as a salesman. [2] [3]

During the Civil War, Bulkeley served as a private with the 13th New York Volunteer Heavy Artillery. [6] He served from May 28, 1862 until September 28, 1862. He served under General George B. McClellan in the Peninsula Campaign and later under General Joseph K. Mansfield. [2] His brother, Captain Charles E. Bulkeley, was killed during the war. [5] He became a companion of the Military Order of the Loyal Legion of the United States by right of inheritance from his brother, who would have been eligible for membership had he lived. [7]

After returning to Hartford in the early days of professional baseball, Bulkeley formed the Hartford Dark Blues of the National Association of Professional Base Ball Players in 1874. In 1875, the team featured Hall of Fame pitcher Candy Cummings and player-manager Bob "Death to Flying Things" Ferguson. In 1876, the NAPBBP was replaced by the National League. Hartford was one of the charter members and Bulkeley was named the league's first president. In his only season as president, he targeted illegal gambling, drinking and fan rowdiness. [8] After the season, he was replaced as president by William Hulbert. Bulkeley was elected to the National Baseball Hall of Fame and Museum in 1937, 15 years after his death. He was also one of the seven members of the Mills Commission formed by Albert Spalding, the group that gave credence to the myth that Abner Doubleday invented baseball. [9]

Bulkeley's short career as a baseball executive coincided with the beginning of his political career. From 1874 to 1876, he served on the Hartford Common Council [10] and the Board of Aldermen. [3] [11] When Thomas O. Enders resigned Aetna's presidency due to ill health in 1879, Bulkeley became the company's third president. [4] In 1880, Bulkeley ran for both mayor of Hartford and governor of Connecticut. He lost the gubernatorial race but won the mayoral race and was Hartford's mayor from 1880 to 1888. [3] As mayor he became known for his flamboyant generosity; for instance, arranging steamboat trips on the Connecticut River for underprivileged children, using his own money. [12]

While mayor of Hartford, on February 11, 1885, Bulkeley married Fannie Briggs Houghton in San Francisco, California. They had two sons and a daughter. [3]

In 1888, Bulkeley again ran for governor. In the election, Luzon B. Morris accumulated more votes than Bulkeley but neither had the required 50%. In accordance with the rules of the time, the General Assembly decided the winner and the largely Republican body chose Bulkeley. [3] Although he did not run in 1890, the vote was so close [2] and fell into such disarray due to ballot irregularities in Bridgeport that officials did not certify the results, [13] and the Connecticut House of Representatives and Senate, each led by opposing parties, could not agree on a legal successor. When Bulkeley refused to recognize the Democratic candidate as the victor, the Democratic state comptroller changed the lock on an anteroom that led from the governor's office to the Statehouse. When Bulkeley found the door locked the next morning, he broke in with a crowbar, earning the nickname the "Crow-Bar Governor". When the legislature refused to appropriate money for state government operations because of the deadlock, Bulkeley, who also happened to be president of Aetna Life Insurance Co., had his company pick up the state's bills until the next election. Bulkeley remained in office two more years, and the state Supreme Court unanimously held that he had been the lawful governor for the disputed period of time. [12]

Morgan Bulkeley died in Hartford at age 84 and was interred at Cedar Hill Cemetery. [14] At the time of his death, Bulkeley had been the president of Aetna for 43 years and had increased its assets from $25.7 million to $207 million and from 29 to 1,500 employees. Under his guidance, Aetna had been transformed from a life insurance company into a company that offered accident, health, automobile, workers compensation, and group insurance. He was succeeded by his nephew, Morgan B. Brainard, who led Aetna for the following 35 years. [4] [12]

He was a member of the Freemasons, Society of the Cincinnati, Grand Army of the Republic, Sons of the Revolution, Sons of the American Revolution, Society of Colonial Wars and the Military Order of Foreign Wars. In 1894 he was elected as a Hereditary Companion of the Massachusetts Commandery of the Military Order of the Loyal Legion of the United States by right of inheritance from his brother, Captain Charles E. Bulkeley, was killed during the Civil War.

The Hartford Bridge over the Connecticut River was renamed the Bulkeley Bridge in his honor in 1922 after his death. [15]

Clarkin Field in Hartford was renamed Morgan G. Bulkeley Stadium in 1928 in his honor.

Aetna Inc. is an American managed health care company that sells traditional and consumer directed health care insurance and related services, such as medical, pharmaceutical, dental, behavioral health, long-term care, and disability plans, primarily through employer-paid insurance and benefit programs, and through Medicare. Since November 28, 2018, the company has been a subsidiary of CVS Health.

The Hartford Dark Blues were a 19th-century baseball team. The team was based in Hartford, Connecticut.

Bacon Academy is a public high school in Colchester, Connecticut, in the United States.

The Bulkeley Bridge is the oldest of three highway bridges over the Connecticut River in Hartford, Connecticut. A stone arch bridge composed of nine spans, the bridge carries Interstate 84, U.S. Route 6, and U.S. Route 44 across the river, connecting Hartford to East Hartford. As of 2005 the bridge carried an average daily traffic of 142,500 cars. The arches are mounted on stone piers, and vary in length from 68 feet (21 m) to 119 feet (36 m); the total length of the bridge is 1,192 feet (363 m).

Hartford Public High School, in Hartford, Connecticut, was founded in 1638. It is the second-oldest public secondary school in the United States, after the Boston Latin School. It is part of the Hartford Public Schools district. 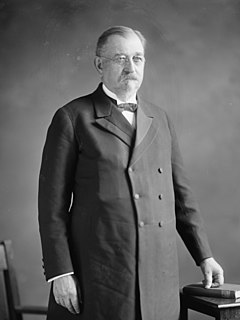 Marcus H. Holcomb was an American politician and the 66th Governor of Connecticut.

Cedar Hill Cemetery in Hartford, Connecticut is located at 453 Fairfield Avenue. It was designed by landscape architect Jacob Weidenmann (1829–1893) who also designed Hartford's Bushnell Park. Its first sections were completed in 1866 and the first burial took place on July 17, 1866. Cedar Hill was designed as an American rural cemetery in the tradition of Mount Auburn Cemetery in Cambridge, Massachusetts.

William Henry Bulkeley was an American politician who was the 60th Lieutenant Governor of Connecticut from 1881 to 1883. 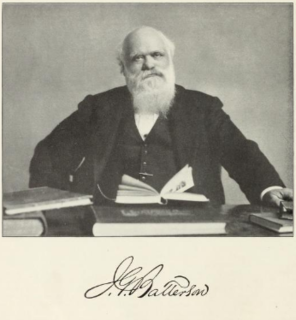 James Goodwin Batterson was an American designer and builder, the owner of New England Granite Works from 1845 and a founder in 1863 of Travelers Insurance Company, both in Hartford, Connecticut. He introduced casualty insurance in the United States, for which he was posthumously inducted into the Insurance Hall of Fame (1965).

Morgan G. Bulkeley Stadium was a sporting event stadium located in Hartford, Connecticut and the site of Babe Ruth's final baseball game. The facility was home to the Eastern League's Hartford Senators, the Hartford Blues of the National Football League, and included a 1/5 mile dirt oval for motor sports. Originally named Clarkin Field from 1921–1927, the stadium was renamed for former Connecticut Governor and First President of the National League, Morgan Bulkeley in 1928.

The following is a timeline of the history of the city of Hartford, Connecticut, USA.

Samuel Tudor IV, Esq. was a prominent nineteenth-century American entrepreneur, business and civic leader of Hartford, Connecticut. He was a founding director of Aetna Insurance Company, the Phoenix National Bank and the Society of Savings Bank of Hartford, as well as a founding trustee and major early benefactor of Trinity College. Tudor was also connected with the establishment of many of the leading institutions of that city. He was a director of the American Asylum School for the Deaf, the oldest permanent school for the deaf in the U.S., and a co-founder of the Hartford Academy.

Louis Richmond Cheney (1859–1944) was a businessman and political figure from Connecticut.

Morgan Bulkeley Brainard was an American attorney, insurance executive, and book collector. He served as president of Aetna from 1922 to 1956, following his uncle Morgan Bulkeley. Brainard was a director of the New York, New Haven and Hartford Railroad until his resignation in 1955.

Edmund Ernest Cammack AIA FAIA FCAS was an English actuary who was an early figure in the Aetna Life Insurance company.