Currently, only parts of the mortuary temple's layout remains, as well as the Colossi of Memnon, which are two large stone statues placed at the entrance measuring 18 meters (59 feet) high (Wilkinson). Because the mortuary temple was built relatively close to the river, the annual flooding caused the site to decay at a more rapid rate over time. The Colossi of Memnon and Amenhotep III Temple Project have helped conserve the site as well as possible (Sourouzian-Third Report).

Dr. Hourig Sourouzian was the main excavator in the early 2000s and the site was visited by Dr. Zahi Hawass, although the mortuary temple was previously excavated in the late 1900s as well. Laurent Bavay examined the pottery found at the site from the 1999-2002 excavation seasons. The Hypostyle Hall was cleared by Myriam Seco Álvarez. (Sourouzian-Third Report)

The temple faced to the East, which is most likely due to the sun rising in the East, since Amenhotep III revered the sun god Amun. At the front of the mortuary temple, the Colossi of Memnon can be found, and as one enters, the long Hypostyle Hall leads to the Peristyle Sun Court, and the whole area is surrounded by three pylons, also known as gates (Sourouzian-Third Report). The Sun court is divided into the North and South halves and consisted of statues of both Amenhotep III and the gods. The North side had statues made of brown quartzite from Lower Egypt, while the South side had red granite from Aswan in Upper Egypt (Kozloff).

Major findings and their significance

Some of the pottery examined by Laurent Bavay were ring-based cups, beer jars, and wine amphorae, which were mainly found in the Peristyle Sun Court and Third Pylon (Sourouzian-Third Report). Some stelae were found at the entrance of the Sun Court, which may have described the pharaoh's building accomplishments. There are hundreds of freestanding statues, sphinxes, and massive stelae throughout the mortuary temple. Some of these include: numerous statues of Sekhmet (lion-headed goddess), animals (such as lion-crocodile sphinx, jackals, scarabs beetles, and a white hippopotamus), Egyptian gods, and Amenhotep III as a god (Kozloff). Dr. Betsy Brian suggests that Amenhotep III may have organized the animal and Sekhmet statues into maps of the heavens, therefore bringing the heavens to Earth (Kozloff). As for the white hippopotamus, archaeologists are unsure of what it represents since there are no written documents or evidence that suggest its purpose, although some have guessed that it was used as some form of ritual (Sourouzian-Fourth Report). Some Sekhmet statues are standing, some are sitting, while some are holding a papyrus scepter on left hand, and the symbol of life on the right hand. Why are there hundreds of Sekhmet statues? Jean Yoyotte suggests that the goddess Sekhmet is given importance because not only is she the "mistress of drunkenness", but she provides healing qualities, which are meant to cure any illnesses of Amenhotep III. Also, she played an important role in the royal jubilee in order to "protect the sun-king against the enemies of the sun" (Sourouzian-Fourth Report).

Having building materials from both Upper and Lower Egypt was a way Amenhotep III established sema-tawy (unification) of both lands. He also establishes Maat (justice and peace) over Islet (chaos) by having the statues of fauna, and therefore having control over them, as well as having depictions of bounded Egyptian enemies (such as the Nubian, Asiatics, Mesopotamians, Aegeans, Hittites, etc.) by some of the many statues of himself.

The whole temple also symbolizes a mound and the "emergence of the world from the primeval waters of creation" every time the Nile river flooded the temple, since the Egyptians believed that the Earth was formed by a mound emerging from the water (Wilkinson). Amenhotep III wanted to be revered as a god on Earth, not just in the afterlife once he is dead. He builds this enormous mortuary temple to leave a legacy that he was a living god who ruled on Earth.

Dr. Zahi Hawass, Mansour Boraik, Ali el-Asfar and Ibrahim Soliman want to bring back the artifacts and findings from the Mortuary Temple of Amenhotep III to the original site, since they are dispersed in different museums. They hope to form an open-air museum and to eventually bring awareness of the importance of on-site conservation.

Memnon may refer to:

In Egyptian mythology, Sekhmet, also spelled Sakhmet, Sekhet, Sakhet, or Scheme, among other spellings), is a warrior goddess as well as goddess of healing. She is depicted as a lioness. She was seen as the protector of the pharaohs and led them in warfare. Upon death, Sekhmet continued to protect them, bearing them to the afterlife. 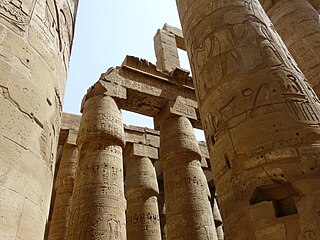 The Karnak Temple Complex, commonly known as Karnak, comprises a vast mix of decayed temples, chapels, pylons, and other buildings near Luxor, in Egypt. Construction at the complex began during the reign of Senusret I in the Middle Kingdom and continued into the Ptolemaic period, although most of the extant buildings date from the New Kingdom. The area around Karnak was the ancient Egyptian Ipet-isut and the main place of worship of the Eighteenth Dynasty Theban Triad with the god Amun as its head. It is part of the monumental city of Thebes. The Karnak complex gives its name to the nearby, and partly surrounded, modern village of El-Karnak, 2.5 kilometres north of Luxor. 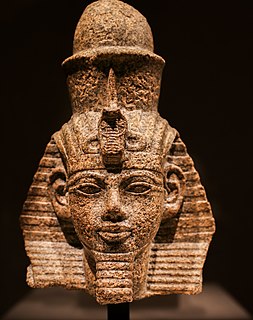 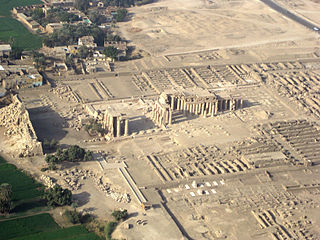 The Ramesseum is the memorial temple of Pharaoh Ramesses II. It is located in the Theban necropolis in Upper Egypt, on the west of the River Nile, across from the modern city of Luxor. The name – or at least its French form, Rhamesséion – was coined by Jean-François Champollion, who visited the ruins of the site in 1829 and first identified the hieroglyphs making up Ramesses's names and titles on the walls. It was originally called the House of millions of years of Usermaatra-setepenra that unites with Thebes-the-city in the domain of Amon.Usermaatra-setepenra was the prenomen of Ramesses II. 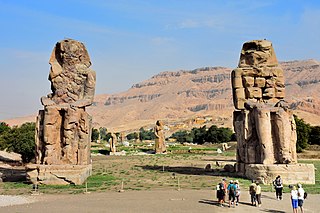 The Colossi of Memnon are two massive stone statues of the Pharaoh Amenhotep III, who reigned in Egypt during the Eighteenth Dynasty of Egypt. Since 1350 BCE, they have stood in the Theban Necropolis, located west of the River Nile from the modern city of Luxor. 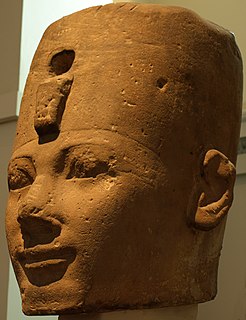 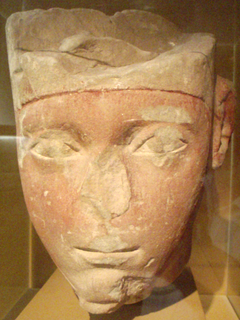 Amenhotep I, Amenôthes I, or Amenophis I, (,) from Ancient Greek Ἀμένωφις, additionally King Zeserkere, was the second Pharaoh of the 18th Dynasty of Egypt. His reign is generally dated from 1526 to 1506 BC. He was a son of Ahmose I and Ahmose-Nefertari, but had at least two elder brothers, Ahmose-ankh and Ahmose Sapair, and was not expected to inherit the throne. However, sometime in the eight years between Ahmose I's 17th regnal year and his death, his heir apparent died and Amenhotep became crown prince. He then acceded to the throne and ruled for about 21 years. Although his reign is poorly documented, it is possible to piece together a basic history from available evidence. He inherited the kingdom formed by his father's military conquests and maintained dominance over Nubia and the Nile Delta but probably did not attempt to maintain Egyptian power in the Levant. He continued the rebuilding of temples in Upper Egypt and revolutionized mortuary complex design by separating his tomb from his mortuary temple, setting a trend in royal funerary monuments which would persist throughout the New Kingdom. After his death, he was deified as a patron god of Deir el-Medina. 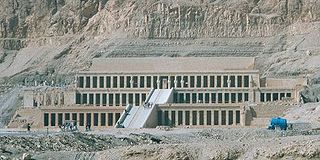 Mortuary temples were temples that were erected adjacent to, or in the vicinity of, royal tombs in Ancient Egypt. The temples were designed to commemorate the reign of the Pharaoh under whom they were constructed, as well as for use by the king's cult after death. 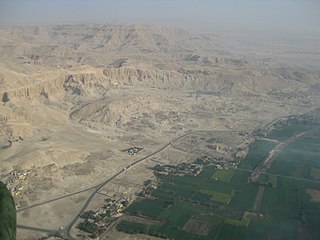 The Theban Necropolis is a necropolis on the west bank of the Nile, opposite Thebes (Luxor) in Upper Egypt. It was used for ritual burials for much of the Pharaonic period, especially during the New Kingdom. 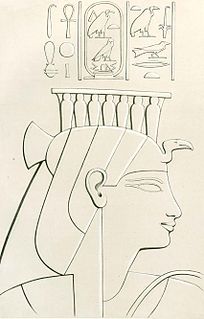 Mutemwiya was a minor wife of the Eighteenth Dynasty pharaoh Thutmose IV, and the mother of Pharaoh Amenhotep III. Mutemwiya's name means "Mut in the divine bark". 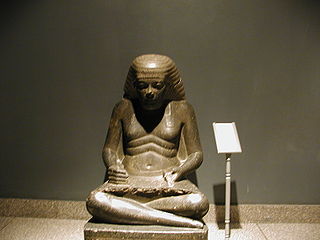 Amenhotep, son of Hapu was an ancient Egyptian architect, a priest, a scribe, and a public official, who held a number of offices under Amenhotep III of the 18th Dynasty. 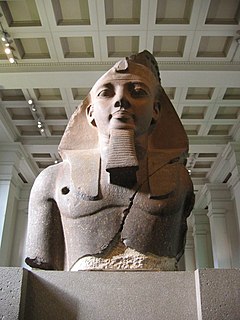 The Younger Memnon is an Ancient Egyptian statue, one of two colossal granite heads from the Ramesseum mortuary temple in Thebes, Upper Egypt. It depicts the Nineteenth Dynasty Pharaoh Ramesses II wearing the Nemes head-dress with a cobra diadem on top. The damaged statue has since lost its body and lower legs. It is one of a pair that originally flanked the Ramesseum's doorway. The head of the other statue is still found at the temple. 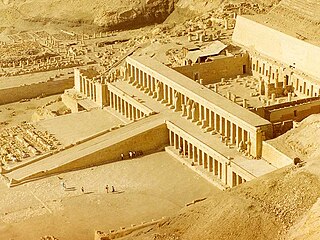 The Mortuary Temple of Hatshepsut, also known as the Djeser-Djeseru, is a mortuary temple of Ancient Egypt located in Upper Egypt. Built for the Eighteenth Dynasty pharaoh Hatshepsut, who died in 1458 BC, the temple is located beneath the cliffs at Deir el-Bahari on the west bank of the Nile near the Valley of the Kings. This mortuary temple is dedicated to Amun and Hatshepsut and is situated next to the mortuary temple of Mentuhotep II, which served both as an inspiration and, later, a quarry. It is considered one of the "incomparable monuments of ancient Egypt."

The colossal red granite statue of Amenhotep III is a granite head of the 18th Dynasty ancient Egyptian Pharaoh Amenhotep III. Dating from around 1370 BC, it was found in the temple enclosure of Mut at Karnak in Upper Egypt. Two parts of the broken colossal statue are known: the head and an arm. Both parts are now in the British Museum.

The colossal quartzite statue of Amenhotep III is an ancient Egyptian sculpture dating from the 18th Dynasty. It was found in the massive mortuary temple of the pharaoh Amenhotep III on the West Bank of the River Nile at Thebes (Luxor) in Egypt. Only the head of the broken colossal statue survives. It is part of the British Museum's Department of Ancient Egypt and Sudan collection. 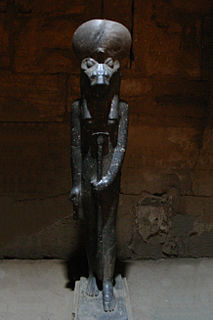 The Sekhmet statues, dating back to the New Kingdom of Egypt during the 18th dynasty and later dynasties, are statues of the Egyptian goddess Sekhmet.

The colossal statue of Amenhotep III and Tiye is a monolith group statue of Egyptian pharaoh Amenhotep III of the eighteenth dynasty, his Great Royal Wife Tiye, and three of their daughters. It is the largest known dyad ever carved. The statue originally stood in Medinet Habu, Western Thebes; today it is the centerpiece of the main hall of the Egyptian Museum in Cairo.

Myriam Seco Álvarez is a Spanish archaeologist and Egyptologist. A distinguished authority in those fields, the author of several reference books, and responsible for excavations in the Middle East and Egypt, she has launched and directed important archaeological projects, including the excavation and restoration of the mortuary temple of Pharaoh Thutmose III. The so-called "Spanish Indiana Jones", she has had a prolific professional career and a broad international presence.