The Moscow Art Theatre (or MAT; Russian : Московский Художественный академический театр (МХАТ), Moskovskiy Hudojestvenny Akademicheskiy Teatr (МHАТ)) is a theatre company in Moscow. It was founded in 1898 by the seminal Russian theatre practitioner Konstantin Stanislavski, together with the playwright and director Vladimir Nemirovich-Danchenko. It was conceived as a venue for naturalistic theatre, in contrast to the melodramas that were Russia's dominant form of theatre at the time. The theatre, the first to regularly put on shows implementing Stanislavski's system, proved hugely influential in the acting world and in the development of modern American theatre and drama.

At the end of the 19th-century, Stanislavski and Nemirovich-Danchenko both wanted to reform Russian theatre to high-quality art that was available to the general public. They set about creating a private theatre over which they had total control (as opposed to trying to reform the government-operated Maly Theatre, a move which would have given them far less artistic freedom). On 22 June 1897, the two men met for the first time at the Slavyanski Bazar for a lunch that started at 2 PM and did not end until 8 AM the next morning. [1] While Stanislavski’s approach to theatre revolved around the acting process, Nemirovich was far more concerned with the literary, intellectual angle.

Their differences proved to be complementary, and they agreed to initially divide power over the theatre, with Nemirovich in charge of the literary decisions and Stanislavski in charge of all production decisions. Stanislavski interviewed all his actors, making sure they were hard working and devoted as well as talented. He made them live together in common housing for months at a time to foster community and trust, which he believed would raise the quality of their performances. Stanislavski's system, in which he trained actors via the acting studios he founded as part of the theatre, became central to every production the theatre put on. [2] The system played a huge influence in the development of method acting.

Stanislavski and Danchenko’s initial goal of having an “open theatre,” one that anyone could afford to attend, was quickly destroyed when they could neither obtain adequate funding from private investors, nor from the Moscow City Council. [3]

The Theatre's first season included works by Aleksey Tolstoy ( Tsar Fyodor Ioannovich ), Henrik Ibsen, and William Shakespeare, but it wasn’t until it staged Anton Chekhov's four major works, beginning with its production of The Seagull in 1898, with Stanislavski in the role of Trigorin, that the theatre achieved fame. This production was so successful that the theatre adopted the seagull as its emblem.[ citation needed ]

After Chekhov’s death in 1904, the theatre experienced a huge changeover; Chekhov had envisioned fellow playwright and friend Maxim Gorki as his successor as the Theatre’s leading dramatist, but Nemirovich and Stanislavski’s reaction to his play Summerfolk was unenthusiastic, causing Gorki to leave. He took with him Savva Morozov, one of the theatre’s main investors at the time. [4]

Now in dire straits, the theatre decided to accept invitations to go on an international tour in 1906, which started in Berlin and included Dresden, Frankfurt, Prague, and Vienna. The tour was a huge success, gaining the theatre international acclaim. However, the sudden change in fortune did not completely quell the company's internal strife; Stanislavski appointed friends to the theatre’s management without consulting Nemirovich and opened studios attached to the theatre where he began to implement his acting system, cementing Nemirovich’s fears that the theatre was becoming a mere extension of Stanislavski’s own ideas and work. The tension between the two led Stanislavski to abandon his duties as a board member and to relinquish all his power over policy decisions. [5]

The theatre continued to thrive after the October Revolution of 1917 and was one of the foremost state-supported theatres of the Soviet Union, with an extensive repertoire of leading Russian and Western playwrights. Although several revolutionary groups saw it as an irrelevant marker of pre-revolutionary culture, the theatre was initially granted support by Vladimir Lenin, a frequent patron of the Art Theatre himself. Mikhail Bulgakov wrote several plays for the MAT and satirised the organisation mercilessly in his Theatrical Novel . Isaac Babel's Sunset was also performed there during the 1920s. A significant number of Moscow Art Theatre's actors were awarded the prestigious title of People's Artist of the USSR. Many actors became nationally known and admired thanks to their film roles. However, the Civil War saw many of the theatre’s actors being cut off from Moscow, and the support it received from the government diminished under Lenin’s New Economic Policy. The subsidies it had come to rely on were withdrawn and the theatre was forced to survive on its own profits. By 1923, the MAT was in $25,000 debt.[ citation needed ]

The theatre experienced further blows through the end of the 1930s. Stanislavski's heart attack onstage during a production of Three Sisters in 1928 led to his almost complete withdrawal from the theatre, while the Stalinist climate began to suppress artistic expression and controlled more and more what could be performed. A "red director" was appointed to the management by the government to ensure that the MAT’s activities were not counter-revolutionary and that they served the Communist cause. As Russia began a period of rapid industrialization, so too was the MAT encouraged to increase production at the expense of quality, with more and more hastily produced plays going up each season. Plays had to be officially approved, and the Theatre’s artistic integrity started to decline.[ citation needed ]

The theatre was officially renamed The Gorky Moscow Art Theatre in 1932. [6] Desperate not to lose support, Stanislavski tried to appease Stalin by accepting his political limitations on what could be performed while retaining his devotion to naturalistic theatre. As a result, the mid-20th century incarnation of the Moscow Art Theatre took a stylistic turn towards Socialist Realism, which would affect its productions for decades.[ citation needed ]

It was not until autumn of 1970 that Oleg Yefremov, an actor, producer, and former student of the Moscow Art Theatre Studios who wanted Russia to once again be a major contender in the theatre world, took over control of the theatre and began to reform it. By the time he arrived to save it, the company was made up of only 150 actors, many of whom were out of practice. Yefremov began to reinstate Stanislavski’s traditions, including emphasizing the importance of the studio and of the system, as well as interviewing every single candidate with special emphasis and attention placed on work ethic. [7]

What follows is a full chronological list of MAT productions [8]

Note: When more than one play is listed on the same line, it means that they were produced and performed together. 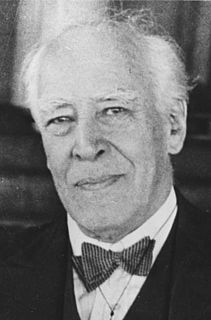 Konstantin Sergeyevich Stanislavski was a seminal Soviet and Russian theatre practitioner. He was widely recognized as an outstanding character actor and the many productions that he directed garnered him a reputation as one of the leading theatre directors of his generation. His principal fame and influence, however, rests on his 'system' of actor training, preparation, and rehearsal technique. 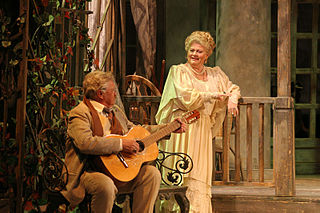 The Seagull is a play by Russian dramatist Anton Chekhov, written in 1895 and first produced in 1896. The Seagull is generally considered to be the first of his four major plays. It dramatises the romantic and artistic conflicts between four characters: the famous middlebrow story writer Boris Trigorin, the ingenue Nina, the fading actress Irina Arkadina, and her son the symbolist playwright Konstantin Treplev.

Vladimir Ivanovich Nemirovich-Danchenko, was a Soviet and Russian theatre director, writer, pedagogue, playwright, producer and theatre administrator, who founded the Moscow Art Theatre with his colleague, Konstantin Stanislavski, in 1898.

Twentieth-century theatre describes a period of great change within the theatrical culture of the 20th century, mainly in Europe and North America. There was a widespread challenge to long-established rules surrounding theatrical representation; resulting in the development of many new forms of theatre, including modernism, Expressionism, Impressionism, political theatre and other forms of Experimental theatre, as well as the continuing development of already established theatrical forms like naturalism and realism. 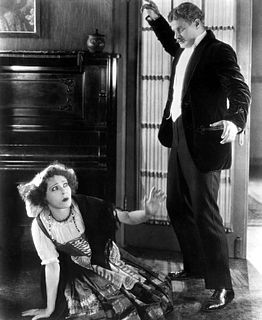 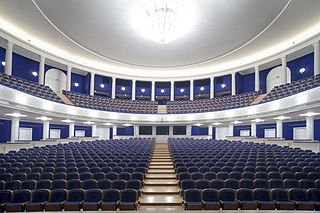 The Stanislavski and Nemirovich-Danchenko Moscow Academic Music Theatre is a music theatre in Moscow. 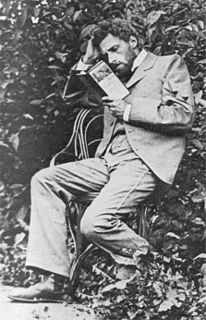 The Moscow Art Theatre production of The Seagull in 1898, directed by Konstantin Stanislavski and Vladimir Nemirovich-Danchenko, was a crucial milestone for the fledgling theatre company that has been described as "one of the greatest events in the history of Russian theatre and one of the greatest new developments in the history of world drama." It was the first production in Moscow of Anton Chekhov's 1896 play The Seagull, though it had been performed with only moderate success in St. Petersburg two years earlier. Nemirovich, who was a friend of Chekhov's, overcame the writer's refusal to allow the play to appear in Moscow after its earlier lacklustre reception and convinced Stanislavski to direct the play for their innovative and newly founded Moscow Art Theatre (MAT). The production opened on 29 December [O.S. 17 December] 1898. The MAT's success was due to the fidelity of its delicate representation of everyday life, its intimate, ensemble playing, and the resonance of its mood of despondent uncertainty with the psychological disposition of the Russian intelligentsia of the time. To commemorate this historic production, which gave the MAT its sense of identity, the company to this day bears the seagull as its emblem.

The Ascension of Little Hannele, also known simply as Hannele, is an 1893 play by the German playwright Gerhart Hauptmann. In contrast to Hauptmann's naturalistic dramas, The Assumption of Hannele adopts a more symbolist dramaturgy and includes a dream sequence. The play is the first in recorded world literature with a child as its heroine. The play tells the story of a neglected and abused peasant child, who, on her deathbed, experiences a vision of divine powers welcoming her into the afterlife. It was first published in 1894. Hauptmann was awarded the Grillparzer Prize in 1896 for the play.

Vasily Ivanovich Kachalov, was one of Russia's most renowned actors. He worked closely and often with Konstantin Stanislavski. He led the so-called Kachalov Group within the Moscow Art Theatre. It was Kachalov who played Hamlet in the Symbolist production of 1911.

Vladimir Fyodorovich Gribunin, was a Russian and Soviet actor. 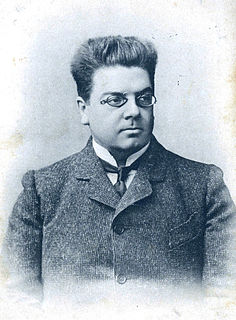 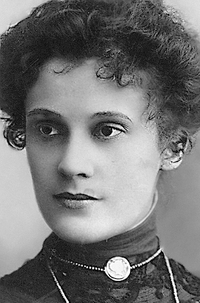 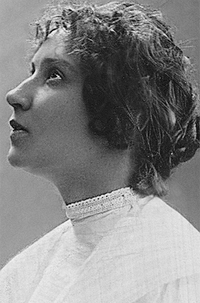 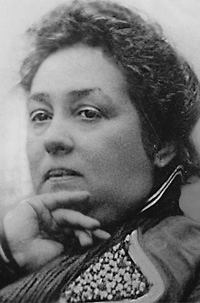 Maria Alexandrovna Samarova was a Moscow-born Russian and Soviet stage actress and reader in drama, associated with the Moscow Art Theatre. 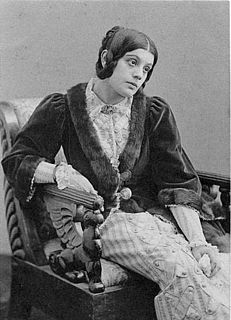