It was co-founded in 1866 as the Moscow Imperial Conservatory by Nikolai Rubinstein and Prince Nikolai Troubetzkoy. [1] It is the second oldest conservatory in Russia after the Saint Petersburg Conservatory. Pyotr Ilyich Tchaikovsky was appointed professor of theory and harmony at its opening. Since 1940, the conservatory has borne his name.

The renovation of the hall was completed in 2011. 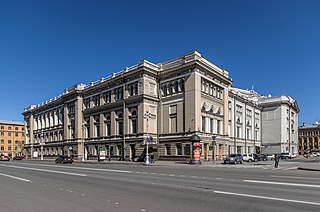 Heinrich Gustav Neuhaus was a Russian-born pianist and teacher of German and Polish extraction. Part of a musical dynasty, he grew up in a Polish-speaking household. He taught at the Moscow Conservatory from 1922 to 1964. He was made a People's Artist of the RSFSR in 1956. His piano textbook The Art of Piano Playing (1958) is regarded as one of the most authoritative and widely used approaches to the subject. 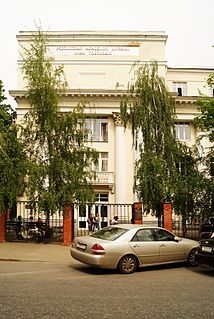 The Gnessin State Musical College and Gnesins Russian Academy of Music is a prominent music school in Moscow, Russia. 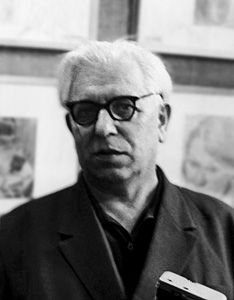 Vladimir Alexandrovich Gorb was a Soviet Russian painter, graphic artist, and art teacher. He lived and worked in Leningrad as professor of the Repin Institute of Arts, was awarded the title of Honored Art Worker of Russian Federation, and was member of the Leningrad branch of Union of Artists of Russian Federation. He is regarded as a representative of the Leningrad school of painting, most famous for his portrait paintings and Art teaching.

Mikhail Davidovich Natarevich was a Soviet, Russian painter who lived and worked in Leningrad; he was a member of the Leningrad Union of Artists, and was regarded as one of the brightest representatives of the Leningrad School of Painting.

Nadezhda Pavlovna Shteinmiller was a Russian Soviet realist painter, graphic artist, art teacher, scenographer, and stage designer who lived and worked in Leningrad. She was a member of the Leningrad Union of Artists, regarded as one of the leading representatives of the Leningrad School of Painting.

Ernst Jedliczka was a Russian-German pianist, piano pedagogue, and music critic. The Encyclopædia Britannica Eleventh Edition stated that Jedliczka "did much to spread Russian music in Germany, placing Russian composers in a prominent place within his concerts and devoting them to a series of articles."

The year 1976 was marked by many events that left an imprint on the history of Soviet and Russian Fine Arts. 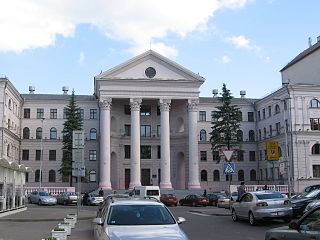 The Belarusian State Academy of Music is the primary music and higher education institution and research center of musicology, folklore, aesthetics, music pedagogy in Belarus, based in Minsk.