Last updated May 11, 2021
This article is about the former Czech Extraliga hockey club, which reformed in the Czech 1.liga. For the current incarnation of the franchise that relocated to Hradec Králové, see Mountfield HK.

The long history started in 1911, when group of young gymnasium students devised a plan to start a bandy team. Their first hockey rinks were situated exactly where the Malše river and Vltava river merge. Dr. Zdeněk Černý was the first coach, manager, as well as a player of the team. The bandy club lasted until World War I. Some of the first victims of the war were players from České Budějovice such as Áda Schrabal, Karel Selinka, Jan Vrkoč, and Leo Feigl.

On January 10, 1928, a club known as AC Stadion České Budějovice was founded by the merging two clubs in České Budějovice - Viktoria and Slovan. The club joined Czechoslovak First Ice Hockey League, the nation's top ice hockey league, in 1936. In their first season, they finished third behind LTC Praha and AC Sparta Praha.

In the 1950–51 season, the club, now called SKP České Budějovice, won its first and only championship in any top-tier league. The club has failed to finish higher than third place (1952–53) in the highest league ever since.

After a disastrous 1962–63 season in which the team won none of the 32 games, the club was relegated to the Czechoslovak Second League until 1968. Overall, HC České Budějovice had been relegated to the second-tier league five other times since the 1958-59 season as of 2013 [update] ; in each case the club re-earned promotion to the top league the following season.

Although it lost in the semifinals of the 2007–08 Czech Extraliga season, HC České Budějovice qualified for the 2008–09 Champions Hockey League as the winner of the regular season. However, its success was short-lived, as it finished eleventh and survived a relegation round the following season.

War of the Beers

Following the 2012–13 season, the Czech Extraliga reached a sponsorship deal with Radegast to sell its beer in all Extraliga arenas. This agreement conflicted with the deal České Budějovice already had with Budweiser Budvar Brewery for their arena. Under the agreement, the club and the city of České Budějovice would face stiff penalties for selling any beer other than Radegast products. [2] [3] Unable to resolve the dispute, the club decided on June 18, 2013 that no new agreement could be reached between the parties involved and voted to immediately relocate to Hradec Králové for the 2013-14 season. [4] [5]

In July 2013, plans were unveiled to resume professional hockey in České Budějovice, with a club playing in the Czech First National League. [6] 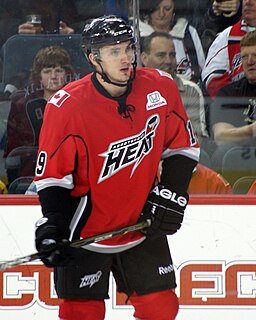 Aleš Kotalík is a former professional ice hockey right winger, who is Assistant GM for HC Mountfield České Budějovice of the Czech Extraliga.

HC Olomouc is an ice hockey team in the Czech Extraliga from Olomouc. They won the Extraliga championship in the 1993/1994 season. In 1997 the club sold the Extraliga license to HC Karlovy Vary, and was thus relegated to the second-level league.

Tomáš Mertl is a Czech professional ice hockey player currently with HC Plzeň of the Czech Extraliga. He originally played with HC České Budějovice in the Extraliga during the 2010–11 Czech Extraliga season before joining fellow ELH club, HK Hradec Kralove.

Rudolf Červený is a Czech professional ice hockey player who is currently playing with Pelicans in the Liiga.

Lukáš Kříž is a Czech professional ice hockey player. He is currently playing for Chevaliers du lac d'Annecy of the FFHG Division 2.

Tomáš Rousek is a Czech professional ice hockey player. He is currently playing for EHC Waldkraiburg of the Regionalliga.