Mount Faloria is a mountain in the Alps of northern Italy, located in the Dolomites near Cortina d'Ampezzo. It has an altitude of 2,123 metres (6,965 ft) and lies in close proximity to Sorapiss. It hosted the men's giant slalom event of the 1956 Winter Olympics, won by Toni Sailer of Austria, the first of three wins in his gold medal sweep. [1] There is a mountain refuge at the summit, Rifugio Faloria. [2] 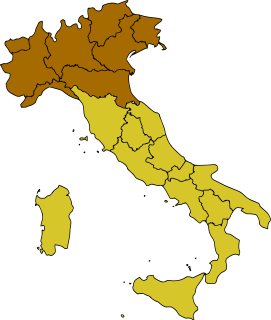 Northern Italy is a geographical region in the northern part of Italy. Non-administrative, it consists of eight administrative Regions in northern Italy: Aosta Valley, Piedmont, Liguria, Lombardy, Emilia-Romagna, Veneto, Friuli-Venezia Giulia and Trentino-Alto Adige/Südtirol. As of 2014, its population was 27,801,460. Rhaeto-Romance and Gallo-Italic languages are spoken in the region, as opposed to the Italo-Dalmatian languages spoken in the rest of Italy.

A cable car, which runs from Cortina through thickly wooded territory and grass land, reaches a station at the mountain. The site is also approached by a four-seat chairlift from the Rio Gere on the Pian de ra Bigontina-Costa Faloria line. [3] At this location there are ski slopes which run for a total length of 10 kilometres (6.2 mi), a snow park, a slow-ski piste, and two refuges and ski bars. From the terrace of the bar at Faloria station, there are views of the mountain and other peaks to the north. [4]

A bar and restaurant existed on top of the mountain as early as 1939, and in 1941, plans for Rifugio Edda Ciano Mussolini were approved. It was built on the initiative of the Funivie Aeree Italiane Turistiche (FAIT) di Cortina d’Ampezzo. The building is situated close to the upper station of the cable car. After World War II, the structure was renamed Rifugio Faloria. [5]

Trekkers can take easy trails along the slopes from the Mount to reach the valley. However, treks to Lake Sorapis need some effort. The lake, which is set in the midst of vertical rock cliffs, has white sand on its shores and the lake water is emerald in colour. [6]

Michelangelo Antonioni directed a documentary film in 1950 titled La Funivia Del Faloria (The Funicular of Mount Faloria) on the cable car between Mount and the Cortina d'Ampezzo, which has a run time of 10 minutes. [7] [8] [9]

Michelangelo Antonioni, Cavaliere di Gran Croce OMRI, was an Italian film director, screenwriter, editor, and short story author. Best known for his "trilogy on modernity and its discontents" — L'Avventura (1960), La Notte (1961), and L'Eclisse (1962)—as well as the English-language films Blowup (1966) and The Passenger (1975), Antonioni produced "enigmatic and intricate mood pieces" that rejected action and plot in favor of contemplation, image, and design. According to AllMovie, he "redefined the concept of narrative cinema" and challenged traditional approaches to storytelling, realism, and drama.

The 1956 Winter Olympics, officially known as the VII Olympic Winter Games, was a multi-sport event held in Cortina d'Ampezzo, Italy, from 26 January to 5 February 1956. 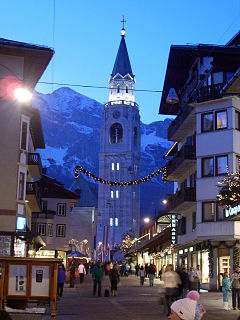 Cortina d'Ampezzo, commonly referred to as Cortina, is a town and comune in the heart of the southern (Dolomitic) Alps in the Veneto region of Northern Italy. Situated on the Boite river, in an alpine valley, it is a winter sport resort known for its skiing trails, scenery, accommodation, shops and après-ski scene, and for its jet set and aristocratic European crowd. 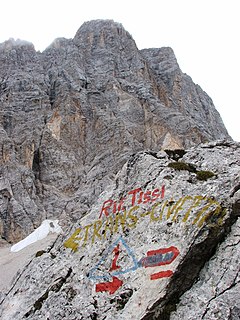 Alta Via 1 is a 150-kilometre-long high-level public footpath which runs through the eastern Dolomites in Italy. It is also known as the Dolomite High Route 1. It passes through some of the finest scenery in the Dolomites. The path runs south from Pragser Wildsee, near Toblach, to Belluno. Prags can be accessed by bus, and Belluno has both train and bus services.

Calalzo di Cadore is a municipality of 2,400 inhabitants of the province of Belluno, in the Italian region of Veneto. The name Calalzo derives from the Latin altus callis, meaning "high place." The geographical name "di Cadore" was added by Presidential Decree on 30 June 1959. 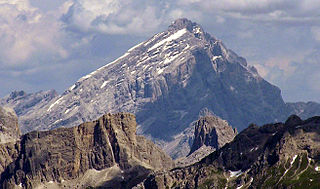 Monte Antelao is the highest mountain in the eastern Dolomites in northeastern Italy, southeast of the town of Cortina d'Ampezzo, in the region of Cadore. It is known as the "King of the Dolomites". Like many Dolomite peaks, Antelao is steep, rocky, and pointed; it also sits close to the edge of the Dolomite uplift and so has dramatic drops to the nearby valleys. 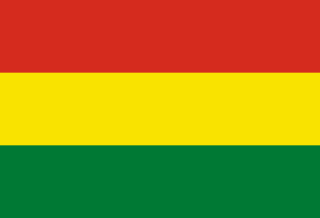 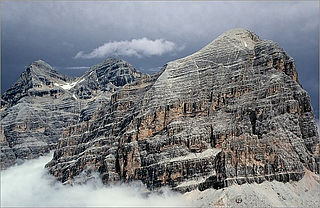 Tofane is a mountain group in the Dolomites of northern Italy, west of Cortina d'Ampezzo in the province of Belluno, Veneto. Most of the Tofane lies within Parco naturale delle Dolomiti d'Ampezzo, a nature park.

Sentiero ferrato Ivano Dibona is a walking route along the Zurlon ridge, the main crest on Cristallo, a mountain group in the Italian Dolomites, northeast of Cortina d'Ampezzo, in the province of Belluno, Veneto, Italy. 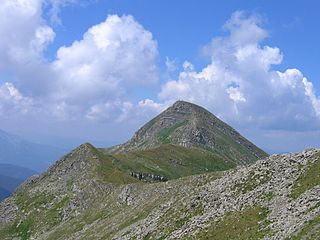 Monte Cusna is the 2nd highest peak in the northern Apennines after Monte Cimone. But, it is much steeper and more remote.

The men's giant slalom at the 1956 Winter Olympics was held on 29 January on Mount Faloria, outside Cortina d'Ampezzo, Italy. The course on the Ilio Colli run was 2.660 km (1.65 mi) in length, with a vertical drop of 623 metres (2,044 ft). There were 71 gates for the men to navigate on the course. Ninety-five men from twenty-nine countries entered the race though eight were disqualified. Austrian men swept the medals.

Cinque Torri are a small group belonging to Nuvolao group, in the Dolomiti Ampezzane north-west of San Vito di Cadore and south-west of Cortina d'Ampezzo. 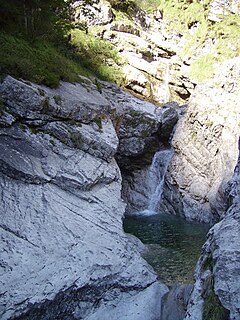 Bolzano Bellunese is an Italian village, hamlet (frazione) of Belluno, in the Veneto.

Lagazuoi is a mountain in the Dolomites of northern Italy, lying at an altitude of 2,835 metres (9,301 ft), about 18 kilometres (11 mi) southwest by road from Cortina d'Ampezzo in the Veneto Region. It is accessible by cable car and contains the Rifugio Lagazuoi, a mountain refuge situated beyond the northwest corner of Cima del Lago. The mountain range is well known for its wartime tunnels and First World War mine warfare. The extensive tunnels were built by the Italian troops trying to wrest control from Austro-Hungarian troops who also built tunnels. The tunnels are now open as a de facto museum.

The Boite is a river of the Veneto region of northern Italy. Passing through the town of Cortina d'Ampezzo, it joins the Piave at Perarolo di Cadore. The principal valley, that of the Piave, runs parallel to the mountain chain which separates the province of Belluno from the basin of the Adige. The secondary valleys, which complete the river basin, are, in descending order and on the right bank, those of Visdende, Comelico Superiore, Auronzo, Boite and Zoldo, traversed, respectively, by the Silvella, or first branch of the Piave, the Padola, Ansiei, Boite, and Mae, which all flow into the main river in a rectangular direction. 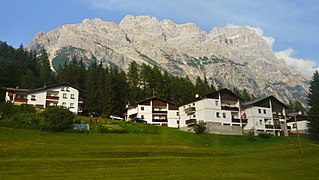 Sorapiss, also referred to as Sorapis or Punta Sorapiss, is a mountain in the Dolomites within the Veneto region of northern Italy. Situated in the comune of Cortina d'Ampezzo, it has an elevation of 3,205 metres (10,515 ft). In its vicinity is a mountain pass of the same name, as well as Lago di Sorapiss, at the foot of the mountain. 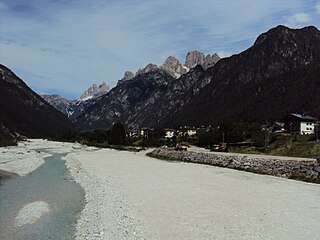 Val d'Ansiei is a valley in the comune of Cortina d'Ampezzo in the Dolomites of the Veneto region of northern Italy. It contains the mountain refuge, Rifugio Tre Sorelle.