The Mount Sneffels Wilderness is a wilderness area in southwest Colorado managed by the Uncompahgre National Forest. It is about 5 miles (8.0 km) west of the town of Ouray. The area is named for Mt. Sneffels, which at 14,150 feet (4,310 m) is a prominent fourteener in the San Juan Mountains. The word "Sneffels" is likely an Americanization of the Old Norse word for Snæfell "snow mountain," which is also the namesake of the Snæfellsnes peninsula and Snæfellsjökull volcano in Iceland. [2] [3] [4]

Panorama of the Sneffels sub-range of the San Juan Mountains, photographed from Dallas Divide pass. Most of these peaks are within the Sneffels Wilderness. 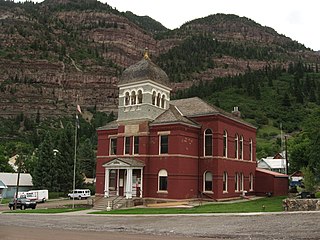 The Sneffels Range, regionally conterminous with San Juans, is a young, prominent, and rugged range of mountains in southwestern Colorado of the San Juan Mountains. The Sneffels range form the southern border of Ouray County and run west to east. 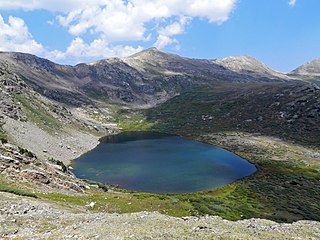 The Hunter–Fryingpan Wilderness is a U.S. Wilderness Area located in White River National Forest east of Aspen, Colorado. The 82,026-acre (331.95 km2) wilderness established in 1978 includes the headwaters of Hunter Creek and the Fryingpan River plus many peaks of the Williams Mountains. It borders on the Mount Massive Wilderness to the east, separated only by the continental divide. There are 50 miles (80 km) of trails in the wilderness area.

The Ptarmigan Peak Wilderness is a U.S. Wilderness Area located north of Dillion, Colorado in the Williams Fork Mountains. The 12,760-acre (51.6 km2) wilderness was established in 1993 in the White River and Routt National Forests.

Dallas Peak is a high mountain summit in the Sneffels Range of the Rocky Mountains of North America. The 13,815-foot (4,211 m) thirteener is located in the Mount Sneffels Wilderness of Uncompahgre National Forest, 3.3 miles (5.3 km) north by west of the Town of Telluride, Colorado, United States, on the drainage divide between Ouray and San Miguel counties.

Gilpin Peak is a high mountain summit in the Sneffels Range of the Rocky Mountains of North America. The 13,700-foot (4,176 m) thirteener is located in the Mount Sneffels Wilderness of Uncompahgre National Forest, 3.5 miles (5.6 km) north-northeast of the Town of Telluride, Colorado, United States, on the drainage divide between Ouray County and San Miguel County. Gilpin Peak was named in honor of William Gilpin, the first Governor of the Territory of Colorado.