Mountain Pine Ridge Forest Reserve is a nature reserve in the Cayo District of southern central Belize. It was established in 1944 to protect and manage the native Belizean pine forests. Its boundaries are poorly defined, but it is estimated to cover an area of 106,352.5 acres (430 km2), although much of the reserve has been leased.

The reserve is predominantly pine forest (58.5%), primarily Honduras pine, Pinus caribaea var. hondurensis, but with a significant broadleaf forest component (36.8%). There are small areas of grassland (3.4%) and wetland (0.6%). Roads, rivers and other features make up the remainder of the area (10.9%). The climate is subtropical with a rainy season from July to February. During the dry season (February to May) temperatures may reach 39 °C (102 °F) with a humidity level of 70%.

The majority of the reserve is situated on a granite massif, with some areas of limestone in the west of the reserve (remnants of a limestone plateau laid during the Jurassic). Sinkholes and caves are common in the limestone areas. The underlying soils are predominantly sandy. The elevation of the reserve averages between 400 and 700 m (1,312 to 2,296 ft) with the highest point being Baldy Beacon at 1,017 m (3,336 ft), and dropping to 120 m (394 ft) at the lowest point on the Macal River.

The Macal River forms the boundaries of the reserve to the west and south and is fed by tributaries including Rio Frio, Rio On, Privassion Creek and Pinol Creek. To the north-east some small streams feed into Barton Creek.

Little is known of the early history of the area. The Maya had a city at Caracol on the borders of the modern reserve as early as 1200 BC, and Mayan artifacts discovered in Barton Creek Cave suggest that it was used as a ritual site. There is no mention of Mountain Pine Ridge in Hummell's 1921 report of Belizean forests, but it is believed he may have been the first forester to visit the area in 1897. To control increasing forestry activity in the area, a region of 1,504,000 acres (6,086 km2) was designated as forest reserve in October 1944, but despite fire control measures being established in 1945, much of the forest was destroyed by a fire in 1949. Few trees in the existing forest date to before this period. The reserve was reclassified in 1952 as a production forest and the 1950s saw the provision of roads and a landing strip. In 1959, the area of the reserve was reduced, losing some land to the neighbouring Sibun Forest Reserve. Hunting was banned in the reserve in 1978 in recognition of the nature conservation role that could be played by the reserve.

The reserve is home to various large mammals, including cougars, jaguars, ocelots, white-nosed coatis, and Baird's tapirs. There is a small population of Morelet's crocodiles.

Native species of bird include the rufous-capped warbler, common crossbill, pine siskin, eastern bluebird, stygian owl, king vulture, ocellated turkey, acorn woodpecker, Lesson's motmot, plumbeous vireo, keel-billed toucan and red-lored parrot. Winter visitors include the hepatic tanager and chipping sparrow. Orange-breasted falcons are more common in the area than elsewhere in Belize. Other fauna present in the reserve are the frog species Rana juliani (which is restricted to the Maya Mountains) and Eleutherodactylus sandersoni , and the fish species Poecilia teresae . The pine forest has been seriously damaged by the southern pine beetle, Dendroctonus frontalis , with 80% of the trees showing signs of attack.

At Barton Creek, there is a large river cave that may extend up to 4.5 miles (7.2 km) and has not been fully explored. It is accessible only by boat, and archaeological investigations have uncovered a large number of Mayan relics from the various ledges above the river, suggesting it was used for rituals. The Rio Frio Cave through which the Rio Frio runs, has the largest entrance of any cave in Belize. There are small waterfalls on the Rio On and larger drops at Big Rock Falls on the Privassion Creek and Hidden Valley Falls. Baldy Beacon provides uninterrupted views over the reserve, as its soil is too poor to support any vegetation other than some hardy grasses.

The area is sparsely populated with the highest concentration (a few hundred people) located at Douglas D' Silva Forest Station, the administrative headquarters of the Western Division of the Forestry Department. A Mennonite community has existed at Barton Creek since around 1969, when Mennonites from Spanish Lookout moved there. A former logging settlement at San Luis is now abandoned.

Belize is a Caribbean country located on the northeastern coast of Central America. Belize borders Mexico to the north, Caribbean Sea to the east and Guatemala to the west and south. It has an area of 22,970 square kilometres (8,867 sq mi) and a population of 419,199 (2020). Its mainland is about 290 km (180 mi) long and 110 km (68 mi) wide. It has the lowest population and population density in Central America. The country's population growth rate of 1.87% per year is the second highest in the region and one of the highest in the Western Hemisphere. Its capital is Belmopan, and its largest city is Belize City. 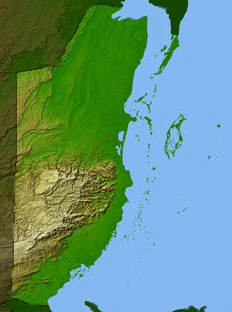 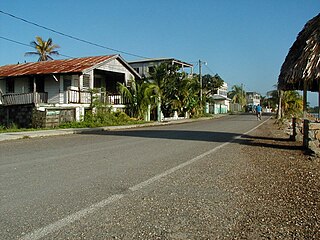 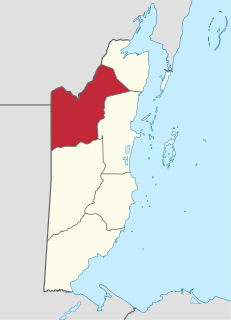 San Ignacio and Santa Elena are towns in western Belize. San Ignacio serves as the cultural-economic hub of Cayo District. It got its start from mahogany and chicle production during British colonisation. Over time it attracted people from the surrounding areas, which led to the diverse population of the town today. San Ignacio is the largest settlement in Cayo District and the second largest in the country, after Belize City.

The Maya ruins of Belize include a number of well-known and historically important pre-Columbian Maya archaeological sites. Belize is considered part of the southern Maya lowlands of the Mesoamerican culture area, and the sites found there were occupied from the Preclassic until and after the arrival of the Spanish in the 16th century.

According to the 2010 census, the major languages spoken in Belize include English, Spanish and Kriol, all three spoken by more than 40% of the population. Mayan languages are also spoken in certain areas, as well as German. 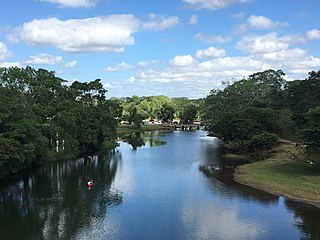 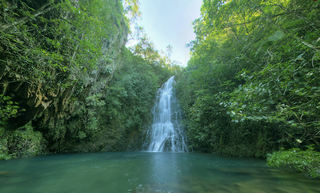 The Petén–Veracruz moist forests is an ecoregion of the tropical and subtropical moist broadleaf forest biome found in Belize, Guatemala, and Mexico.

Chiquibul National Park is Belize's largest national park. It is 1,073 km2 (414 sq mi) in size. The park is located in Belize's Cayo District. The national park surrounds Caracol, a Mayan city. Caracol has been designated as an archaeological reserve and is not included within the park's total area. Chiquibul Forest Reserve is adjacent to the park.

The Rio Bravo Conservation and Management Area is a nature reserve located in northwestern Belize. Rio Bravo, as it is known, was established by Programme for Belize in 1988 with the purchase of 110,044 acres of land from Gallon Jug Agroindustries. With logging encroachment imminent in 1989, the Nature Conservancy joined Programme for Belize to protect the land. Additional land donations from Coca-Cola Foods, Inc. and purchases from New River Enterprises Ltd. enlarged the protected area to 230,875 acres (934.32 km2). Rio Bravo is the largest terrestrial conservation area in Belize, comprising 4% of the country's total land area. 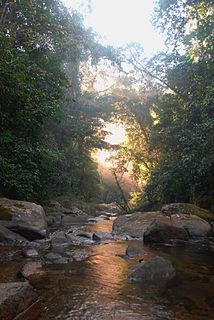 Bladen Nature Reserve is a landscape of caves, sinkholes, pristine streams and rivers, undisturbed old growth rainforest and an abundance of highly diverse flora and fauna which includes a great deal of rare and endemic species.

Belizean Spanish is the dialect of Spanish spoken in Belize. It is similar to Caribbean Spanish, Andalusian Spanish, and Canarian Spanish. While English is the only official language of Belize, Spanish is the common language of majority (62.8%), wherein 174,000 speak some variety of Spanish as a native language. Belizeans of Guatemalan, Honduran, Mexican, Nicaraguan, and Salvadoran descent may speak different dialects of Spanish, but since they all grow up in Belize, they all adopt the local accent.

The Maya Golden Landscape is an area in Belize of approximately 275,000 hectares consisting of protected areas, agriculture, private lands and many small communities that is under the management of the Ya'axché Conservation Trust in Toledo District. The Landscape area encompasses the Bladen Nature Reserve, Colombia River Forest Reserve, Cockscomb Basin Wildlife Sanctuary, Deep River Forest River Reserve, Port Honduras Marine Reserve, along with commercial and subsistence farmland. Most of the area is dominated with various types of broadleaf forests which varies with topography, soil type and the disturbance history. One disturbance that affect the area, as well, is fires caused by agricultural farming due to the slash and burn practice.