Of noble Lithuanian extraction, Dobuzhinsky was born on August 14, 1875 in Novgorod into the family of an army officer. From 1885 to 1887, he attended the Drawing School of the Society for the Promotion of the Artists. Between 1895 and 1899, he read Law at the University of St. Petersburg, simultaneously studying in private studios. After graduating from the University, he was trained from 1899 to 1901 by Anton Ažbe in Munich and Simon Hollósy in Nagybánya (Austria-Hungary). In Munich, he came to be influenced by the Jugendstil. On his return to Russia, he joined the Mir Iskusstva, an artistic circle which idealized the 18th century as the "age of elegance".

Dobuzhinsky was distinguished from other miriskusniki by his expressionist manner and keen interest in modern industrial cityscapes. He often painted seedy or tragic scenes from urban life which expressed the nightmarish bleakness and loneliness of modern times. Among his works were also humorous vignettes and sketches with demon-like creatures which seemed to embody the monstrosities of urbanization.

Like other members of the Mir iskusstva, Dobuzhinsky also experimented with scenic design. At first he worked for Constantin Stanislavski at the Moscow Arts Theatre, but later on also contributed sets to several Diaghilev productions. He was renowned as an excellent art teacher; among his young pupils was Vladimir Nabokov, with whom he maintained correspondence for decades.

During the First World War Dobuzhinsky went with Eugene Lanceray to the front lines to sketch. In 1918, he supervised the theatrical workshop at the State Educational Workshops of the Decorative Arts (the former Stieglitz School of the Technical Drawing). In 1920, he took part in the Second Congress of the Communist International. In 1923-24, he went abroad to study developments in European art and to arrange one-man shows. In 1924, Dobuzhinsky followed the advice of Jurgis Baltrusaitis and withdrew to Lithuania. He was naturalized there in 1924 and lived in Kaunas until 1925. Between 1925 and 1929 lived in Paris where he designed sets for Nikita Balieff's The Bat. He returned to Lithuania in 1929. In Lithuania he worked at a state theatre as scenographer and created scenography for 38 plays, besides running a private painting school (1930–1933).He then emigrated to England in 1935, and moved to the United States in 1939 where he stayed for the duration of the war. He spent the last ten years of his life in Europe, occasionally returning to New York for theatrical work. He died in New York on November 20, 1957. His memoirs were published posthumously in Russian.

Dobuzhinsky is represented in the following institutions, among others: Tretyakov Gallery, Moscow; The A. A. Bakhrushin Theatre Museum, Moscow; The Russian Museum, St. Petersburg; National Gallery of Armenia, Yerevan; Irbit State Museum of Fine Art, Irbit. 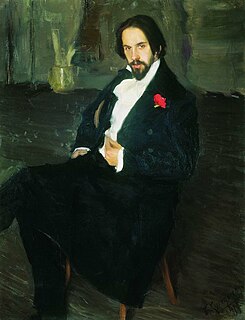 Ivan Yakovlevich Bilibin was a Russian illustrator and stage designer who took part in the Mir iskusstva, contributed to the Ballets Russes, co-founded the Union of Russian Painters and from 1937 was a member of the Artists' Union of the USSR. Ivan Bilibin gained popularity with his illustrations to Russian folk tales and Slavic folklore. His work was throughout his career inspired by the art and culture of Old Russia. 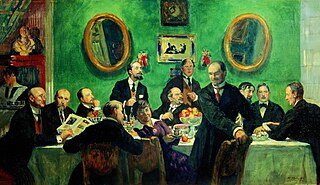 Mir iskusstva was a Russian magazine and the artistic movement it inspired and embodied, which was a major influence on the Russians who helped revolutionize European art during the first decade of the 20th century. In fact, few Europeans outside Russia actually saw issues of the magazine itself.

Alexandre Nikolayevich Benois was a Russian artist, art critic, historian, preservationist, and founding member of Mir iskusstva, an art movement and magazine. As a designer for the Ballets Russes under Sergei Diaghilev, Benois exerted what is considered a seminal influence on the modern ballet and stage design.

Sergey Yurievich Sudeikin, also known as Serge Soudeikine, was a Russian artist and set-designer associated with the Ballets Russes and the Metropolitan Opera. 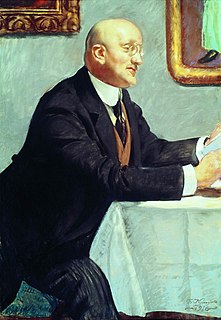 Igor Emmanuilovich Grabar was a Russian post-impressionist painter, publisher, restorer and historian of art. Grabar, descendant of a wealthy Rusyn family, was trained as a painter by Ilya Repin in Saint Petersburg and by Anton Ažbe in Munich. He reached his peak in painting in 1903–1907 and was notable for a peculiar divisionist painting technique bordering on pointillism and his rendition of snow. 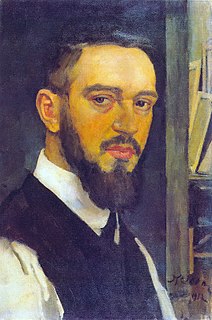 Konstantin Fyodorovich Yuon or Juon was a noted Russian painter and theatre designer associated with the Mir Iskusstva. Later, he co-founded the Union of Russian Artists and the Association of Artists of Revolutionary Russia. 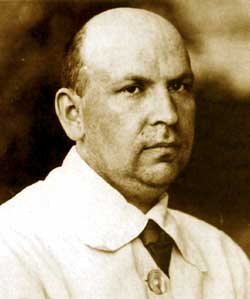 Heorhiy Narbut was the most important Ukrainian graphic designer of the twentieth century. 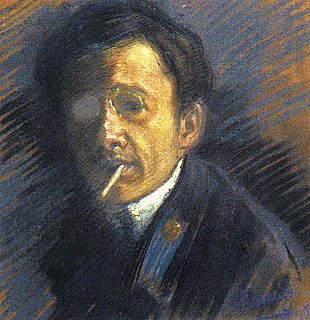 Nikolay Lanceray was a Russian architect, preservationist, illustrator of books and historian of neoclassical art, biographer of Charles Cameron, Vincenzo Brenna and Andreyan Zakharov. Lanceray was associated with Mir Iskusstva art circle and was a proponent of Russian neoclassical revival school.

Aleksei Ilyich Kravchenko was a Russian painter, illustrator, draughtsman and printmaker. Though Kravchenko first gained recognition as a romantic painter, he was best known during his lifetime as a book illustrator and graphic artist. His post-revolutionary paintings were only exhibited in 1974 at the State Tretyakov Gallery in Moscow. Works such as The Kiss (1929) and Indian Fairytale confirmed him as one of the most dramatic romantic painters and boldest colorists of his generation.

The year 1922 was marked by many events that left an imprint on the history of Soviet and Russian Fine Arts.

The year 1924 was marked by many events that left an imprint on the history of Soviet and Russian Fine Arts.

Pyotr Petrovich Vereshchagin was a Russian landscape and cityscape painter in the Academic style. He was the first to paint plein-air in the wilderness of the Urals.

Elizaveta Nikolaevna Zvantseva was a Russian painter and art instructor who founded "the most progressive art school in pre-1917 Russia". Among alumni of the school were Marc Chagall, Elena Guro, and Margarita Woloschin. 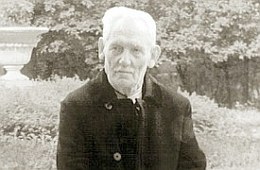