Muş province is divided into 6 districts (capital district in bold):

Historically, Muş was known for producing wheat. [9] The province also grew madder, but locals retained it, using it for dye. [10] The area also had salt mines. As of 1920, the region had so much salt that it was said to have enough to supply Europe and Asia. [11] 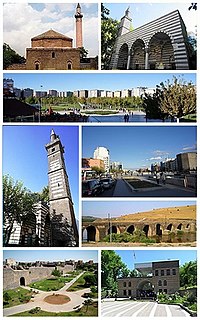 Sivas Province is a province of Turkey. It is largely located at the eastern part of the Central Anatolia region of Turkey; it is the second largest province in Turkey by territory. Its adjacent provinces are Yozgat to the west, Kayseri to the southwest, Kahramanmaraş to the south, Malatya to the southeast, Erzincan to the east, Giresun to the northeast, and Ordu to the north. Its capital is Sivas. 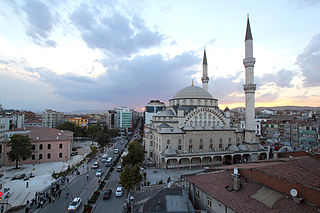 Elâzığ, formerly Mamuretülaziz, is a city in Eastern Anatolia region of Turkey, and the administrative centre of Elâzığ Province. It is located in the uppermost Euphrates valley. The plain on which the city extends has an altitude of 1,067 metres (3,501 ft). Elâzığ resembles an inland peninsula surrounded by the natural Lake Hazar and reservoirs of Keban Dam, Karakaya Dam, Kıralkızı and Özlüce. 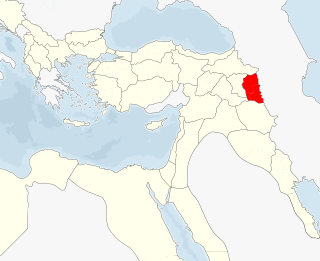 The Vilayet of Van was a first-level administrative division (vilayet) of the Ottoman Empire. At the beginning of the 20th century, it reportedly had a population of about 400,000 and an area of 15,000 square miles (39,000 km2). Van Vilayet was one of the Kurdish Viyalets and held, prior to World War I, majority Kurds, as well as Armenians, Assyrian and Azeri minorities. 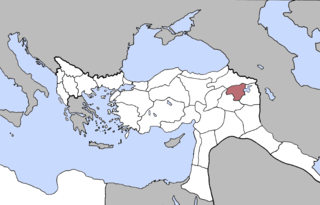 Bitlis Vilayet was a first-level administrative division (vilayet) of the Ottoman Empire. Before the Russo-Turkish War (1877–1878) it had been part of the Erzurum Vilayet, it was then made a separate vilayet by the Porte. It was one of the six Armenian vilayets of the Empire.

Diyadin is a town and district in Ağrı Province of Turkey, at the foot of Mount Tendürek, a high peak in the Aladağlar range that stands between Ağrı and the north shore of Lake Van. 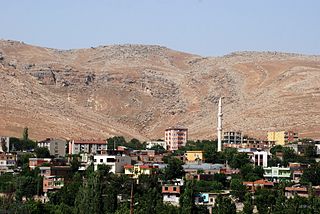 Silvan is a city and district in the Diyarbakır Province of Turkey. Its population is 41,451.

Bulanık, formerly Gop or Kop, is a town and district of Muş Province in the Eastern Anatolia region of Turkey. 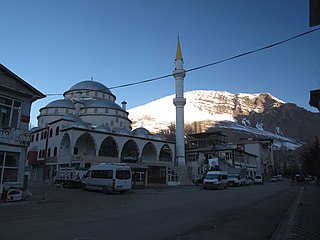 Zara is a town and a district of Sivas Province of Turkey. The mayor is Fatih Celik (MHP). The town is 70 km. away from Sivas downtown.

Malazgirt or Malâzgird, historically known as Manzikert, is a town in Muş Province in eastern Turkey, with a population of 23,697. It is popularly known as the site where the Battle of Manzikert was fought. 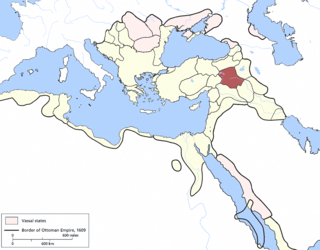 The Eyalet of Diyarbekir was an eyalet of the Ottoman Empire. Its reported area in the 19th century was 20,332 square miles (52,660 km2), slightly larger than the original Abbasid province in Upper Mesopotamia. In 1846 it was succeeded by the Kurdistan Eyalet.

Kurdistan Eyalet was an eyalet of the Ottoman Empire. It was the first time that the Ottoman Empire used the term "Kurdistan" to refer to an administrative unit rather than a geographical region. It was formed with the aim of establishing direct control over Kurdistan, rather than recognizing it as a political entity. It was a short-lived province as it only lasted about 21 years, between 1846 and 1867. This time was marked by the lack of a powerful Kurdish ruler in the region. It led to the rise of the religious sheikhs belonging to the Naqshbandi and Qadiriyya dervish orders, or tariqas. It was formed after Bedir Khan Beg was defeated and sent to Istanbul. Initially the eyalet covered the region of the former Kurdish Emirate of Bohtan, but it was expanded gradually and at its widest extension included the former Diyarbekir Eyalet and the areas around Van, Hakkari and Muş, as well as the districts of Botan, Mardin, and Cizre. According to the salnames between 1847 and 1867, it was ruled by the central Ottoman government and received annual funding of 80,000 piastres, considerably more than the Mosul Eyalet. In 1867 it was abolished and succeeded by the Diyarbekir Vilayet. During its existence, it saw twelve different governors who had either the title of müsir or vizier.