Last updated April 26, 2020
Not to be confused with Syed Muhammad Miyan Deobandi.

He was born into a Noble family of Ansari in UP Saharanpur. He grew up in the house of Allama Abdullah Ansari. Mansoor Ansari returned to the Darul-Uloom Deoband and gradually became involved in the Pan-Islamic movement. During World War I, he was among the leaders of the Deoband School, who, led by Shaykhul Hind Mahmud al-Hasan, left India to seek support of the Central Powers for a Pan-Islamic revolution in India in what came to be known as the Silk Letter Movement. [2]

These letters were written on silk cloth, hence the name. The hero of Silk Letter Movement, Maulana Muhammad Mian Mansoor Ansari, the one who went to Hejaz, Saudi Arabia with Maulana Mahmud al-Hasan in September 1915 and worked as treasurer of the Jama’at. He returned to India in April 1916 with Ghalib Nama (Silk Letter) which he showed to freedom fighters in India and the autonomous area and then took it to Kabul, Afghanistan in June 1916. [3] [2]

Mansoor Ansari went to Kabul during the First world war to rally the Afghan Amir Habibullah Khan. He joined the Provisional Government of India formed in Kabul in December 1915, and remained in Afghanistan until the end of the war. He traveled to Russia and spent two years in Turkey, passing through many other countries.

He was one of the most active and prominent members of the faction of the Indian Freedom Movement led by Muslim clergy who were chiefly from the Darul Uloom Deoband. [2]

In 1946, the Indian National Congress requested him to return to India and the British Government gave him the permission to do so. But he decided to remain at Kabul, where he began a programme teaching and translating Tafsir Sheikh Mahmudul Hassan Deobandi (known as Kabuli Tafseer).

In 1946, Muhammad Mian Mansoor Ansari was taken seriously ill and died on 11 January 1946 at Jalalabad, Nangarhar Province in Afghanistan and was buried there. [1]

The Darul Uloom Deoband is an Islamic university in India where the Sunni Deobandi Islamic movement began. It is located at Deoband, a town in Saharanpur district, Uttar Pradesh. The school was founded in 1866 by Muhammad Qasim Nanautavi

Buta Singh Uppal, later known as Ubaidullah Sindhi, was a political activist of the Indian independence movement and one of its vigorous leaders. According to Dawn, Karachi, Maulana Ubaidullah Sindhi struggled for the independence of British India and for an exploitation-free society in India. He was also Home Minister of first Provisional Government of India established in Afghanistan in 1915.

Darul Uloom Nadwatul Ulama translated to English as House of Knowledge & Assembly of Scholars University is an Islamic institution at Lucknow, India.

Sayyid Hussain Ahmad Madani was an Indian Islamic scholar. He was among the first recipients of the civilian honour of Padma Bhushan in 1954.

Mahmud Hasan Deobandi also known as Mahmud al-Hasan was a Sunni Muslim scholar who was active against British rule in India. For his efforts and scholarship, he was given the title "Shaykh al-Hind" by the Central Khilafat Committee. He was the very first student of Darul Uloom Deoband.

The Provisional Government of India was a provisional government-in-exile established in Kabul, Afghanistan on December 1, 1915 by Indian nationalists, during World War I with support from the Central Powers. Its purpose was to enrol support from the Afghan Emir as well as Tsarist Russia, China, and Japan for the Indian Movement. Established at the conclusion of the Kabul Mission composed of members of the Berlin Committee, German and Turkish delegates, the provisional government was composed of Mahendra Pratap as President, Maulana Barkatullah as Prime Minister, Deobandi Maulavi Ubaidullah Sindhi as Home Minister, Deobandi Maulavi Bashir as War Minister, and Champakraman Pillai as Foreign Affairs Minister. The provisional government found significant support from the internal administration of the Afghan government, although the Emir refused to declare open support, and ultimately, under British pressure it was forced to withdraw from Afghanistan in 1919.

Shabbir Ahmad Usmani was an Islamic scholar who supported the Pakistan Movement in the 1940s. He was a religious scholar, writer, orator, politician, and expert in tafsir and Hadith.

The Silk Letter Movement refers to a movement organised by Deobandi leaders between 1913 and 1920, aimed at freeing India from British rule by forming an alliance with Ottoman Turkey, Imperial Germany, and Afghanistan. This plot was uncovered by the Punjab CID with the capture of letters from Ubaidullah Sindhi, one of the Deobandi leaders then in Afghanistan, to Mahmud al Hasan, another leader then in Persia. The letters were written on silk cloth, hence the name.

Muhammad Qasim Nanautavi was an Indian Sunni Hanafi Islamic Scholar and was one of the main founders of the Deobandi Movement, starting from the Darul Uloom Deoband. Some deobandi's also have given him the title Hujjat al-Islam. The rest of Sunnis keep the title exclusively for Imam al-Ghazali, and do not recognize anyone else's claim to it. 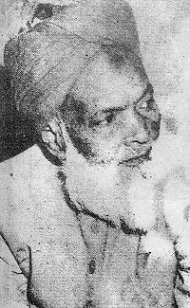 Muḥammad Shafī‘ ibn Muḥammad Yāsīn ‘Us̱mānī Deobandī, often referred to as Mufti Muhammad Shafi, was a Pakistani Sunni Islamic scholar of the Deobandi school of Islamic thought. A Hanafi jurist and mufti, he was also an authority on shari'ah, hadith, tafsir, and tasawwuf (Sufism). Born in Deoband, British India, he graduated in 1917 from Darul Uloom Deoband, where he later taught hadith and held the post of Chief Mufti. He resigned from the school in 1943 to devote his time to the Pakistan Movement. After the independence he moved to Pakistan, where he established Darul Uloom Karachi in 1951. Of his written works, his best-known is Ma'ariful Qur'an, a tafsir of the Qur'an.

Maulana Abdul Haq of Akora Khattak, sometimes referred to as Abdul Haq Akorwi was a Pakistani Islamic scholar and the founder, chancellor, and Shaykh al-Hadith of the Islamic seminary Darul Uloom Haqqania. He was involved in politics as a member of the political party Jamiat Ulema-e-Islam. He served three times in the National Assembly of Pakistan and was an active proponent of the Khatme Nabuwwat movement.

Muḥammad Idrīs ibn Muḥammad Ismā‘īl Ṣiddīqī Kāndhlawī was a Deobandi Islamic scholar particularly known as a scholar of hadith and tafsir. He held the post of Shaykh at-Tafsir at Darul Uloom Deoband in India and later migrated to Pakistan where he served as Shaykh al-Hadith wat-Tafsir at Jamia Ashrafia Lahore. Notable among his written works are Ma'ariful Qur'an, a tafsir of the Qur'an, Siratul Mustafa, a sirah (biography) of the Islamic prophet Muhammad, and at-Ta'liq as-Sabih, an Arabic sharh (commentary) on the hadith collection Mishkat al-Masabih. A graduate of both Mazahir Uloom Saharanpur and Darul Uloom Deoband, he studied under scholars including Khalil Ahmad Saharanpuri, Anwar Shah Kashmiri, and Shabbir Ahmad Usmani.

Mian Sayyid Asghar Hussain was an Indian Sunni Islamic scholar. He was a disciple of Haaji Imdadullah Muhajir Makki and a notable student of Shaykhul Hind Maulana Mahmud-ul-Hasan.

Mawlānā Murtaza Hasan Chandpuri (1868-1951) was an Indian Sunni Islamic scholar. He was a disciple of Mawlānā Ashraf Ali Thanwi in Chishti branch of Tasawwuf.

Muhammad Salim Qasmi Siddiqi was an Indian Sunni Islamic scholar. He was the great grandson of the founder of Darul Uloom Deoband, Muhammad Qasim Nanautavi, being the eldest son of Qari Muhammad Tayyib.